The 10 best Christmas movies for kids 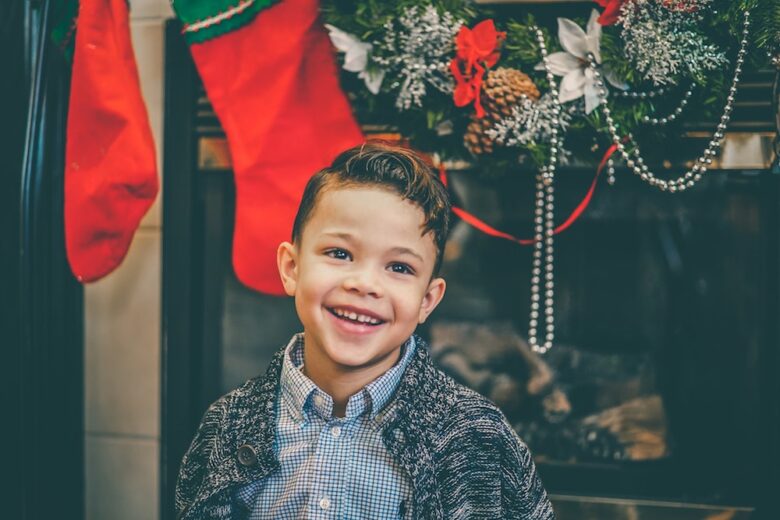 We’ve rounded up some of the best Christmas movies to introduce to your kids this holiday season.

Sometimes, Christmas tends to be more about the gifts than anything else – a watch for Dad, cute shoes for your daughter, headphones for kids for the little gamer in the family, and so on.

It’s easy to lose sight of the simple things amidst the bustle of the holiday season, so we’re here to remind you that if we’re talking gifts, there’s only one that truly outweighs them all – your time.

Christmastime is family time, and one great way you can maximize on that is with a good old Christmas movie marathon to keep your little ones happy and entertained. We’ve got you covered with everything from classics to modern hits that both kids and adults will love, so let’s dive in.

Arthur Christmas is about Arthur, Santa’s second and often overlooked son, who believes that every single kid in the whole world deserves the perfect Christmas, and Steve, the more cynical older brother and heir to the red suit, whose only concern is the business side of Christmas.

When they accidentally forget to deliver one child’s Christmas gift, a hilarious adventure ensues, complete with battalions of elves executing Mission Impossible-esque tasks, a giant sleigh-shaped aircraft, and lots and lots of pixie dust.

Why we love it: It’s a fun, fresh take on what goes on behind the scenes at Santa’s headquarters, but also a heartwarming story about how no child should be left behind on Christmas.

This iconic animated film is a whimsical story about how Jack Skellington, the Pumpkin King of Halloweentown, becomes bored with the same old routine of scaring children on Halloween. When he discovers Christmas for the first time, he becomes obsessed with the sheer joy and magic of it that he promptly decides to kidnap Santa and take over the holiday for himself.

Why we love it: The stop-motion animation is a treat for the eyes and a nice break from the typical CGI movies we’re all used to. Add to that a fantastic soundtrack and unforgettable song numbers; this movie will surely be a pleasure for kids of all ages.

Scott Calvin is a well-to-do toy salesman who becomes Santa’s unwitting replacement after Santa Claus himself falls off a roof while delivering gifts on Christmas Eve. Upon the urging of his son, Charlie, Scott dons the Santa suit and takes over the delivery of Christmas gifts, thinking it’s a one-time deal.

When the reindeers take them back to the North Pole after the job is done, Scott finds out that he’s stuck with the job for life. While Scott eventually accepts the idea, he has difficulty getting his family to do the same.

Why we love it: The Santa Clause is a hilarious and sweet story about the importance of being there for the people you love and believing in magic, no matter what age you are.

After accidentally stowing away in Santa’s sack as an orphaned baby, Buddy becomes the first human ever to be raised as an elf in the North Pole. When he learns about the existence of his birth father (who also happens to be on Santa’s Naughty List *gasp*), Buddy becomes determined to meet him and perhaps help him redeem himself.

The movie follows Buddy’s journey to New York City and his hysterical misadventures as he tries to navigate what it means to be a normal human being.

Why we love it: Kids and adults alike will not only enjoy watching Buddy’s silly antics with random mall Santas (“You sit on a throne of lies!”), but will also be endeared by his child-like innocence and addiction to all things sweet.

This live-action adaptation of Dr. Seuss’s classic book of the same name follows the story of the Grinch, a mean-spirited Who that lives on Mount Crumpit and wants nothing to do with Christmas.

When little Cindy Lou Who invites the Grinch to participate in the festivities, he agrees at first but eventually becomes angered by the Whos’ materialism and hyper fixation on gifts. In the midst of his plan to ruin Christmas in Whoville, the Grinch, and everyone else in Whoville, learns about the true meaning of Christmas.

Why we love it: It’s a kooky movie that highlights the power of friendship and how everyone, even the meanest person, has a wealth of goodness and love inside of them too.

The Nutcracker has long been a Christmas staple for lovers of ballet and the theater. In this version of the story, a little girl named Marie is gifted with a magical doll, the Nutcracker, by her mysterious Uncle Drosselmeyer.

On the night of Christmas Eve, the Nutcracker and all the other toys come to life, and Marie suddenly finds herself stuck in the middle of a battle between the toy soldiers and the mice. Marie ends up saving the Nutcracker, and to show his gratitude, he takes her on a fantastic journey to the Kingdom of Sweets, where she meets the Sugar Plum Fairy.

Why we love it: The Nutcracker is always a feast for the eyes and ears – you have gorgeous costumes, beautiful sets, timeless music, and not to mention the dancing. Without a doubt, it is the epitome of magic, beauty, and adventure that all children should experience.

Set in Victorian England, Clara attends a Christmas party with her family at her Uncle Drosselmeyer’s home. While hunting for a Christmas gift that her Uncle has hidden in his house, Clara is transported to another world.

There she meets the regents of the three realms – the Land of Sweets, the Land of Snowflakes, and the Land of Flowers – and discovers that she must help them battle the regent of the fourth realm, the Land of Amusements, to restore balance in their world.

Why we love it: In addition to being a more thrilling and modern take on the Nutcracker tale, the film manages to retain the magic, beauty, and wonder of the original stage production – even the ballet aspect of it. It will keep both younger and older children positively glued to their seats.

The Muppet version of Charles Dickens’ A Christmas Carol is an oldie but goodie, and a definite must-see for younger children. It depicts the life and transformation of Ebenezer Scrooge, a bad-tempered, miserly, heartless old man who despises the sentiments of Christmas.

After meeting the Ghosts of Christmas Past, Present, and Future, his eyes are opened to the selfishness of his ways and changes for the better.

Why we love it: It’s a little bit of everything – a fantasy, comedy, drama, and musical. It’s also able to lightheartedly communicate the importance of being kind and giving to one another, no matter the season.

When the Nightmare King, Pitch Black, threatens to torment children by engulfing the world in darkness and nightmares, a group of heroes called the Guardians must band together to make sure that doesn’t happen.

Consisting of Jack Frost, the Tooth Fairy, Sandman, the Easter Bunny, and their leader Nicholas St. North, the Guardians launch an epic onslaught to make sure that the dreams and beliefs of children everywhere are protected.

Why we love it: Any chance we get to see our most beloved folkloric figures in the same movie, battling it out together against a common enemy is a real treat in and of itself.

Home Alone is a film that hardly needs any introduction. It’s such a quintessential Christmas movie that it’s hard to make a “Best Christmas Movies” list without the mere mention of it. Home Alone follows the story of a little boy who is accidentally left behind when his family goes on Christmas vacation and has to protect himself (and his house) against two bumbling burglars.

Why we love it: Home Alone is practically synonymous with Christmas and is the perfect blend of comedy, action, holiday spirit, and heartwarming family drama. It’s a story that never gets old, which is why it’s lasted all this time, entertaining generations of kids every holiday season.

Did your favourite Christmas movie make the list? Whether you’ve got toddlers or tweens, we hope this line-up of movies will have them delighted and amused for hours on end, and hopefully learning something too.