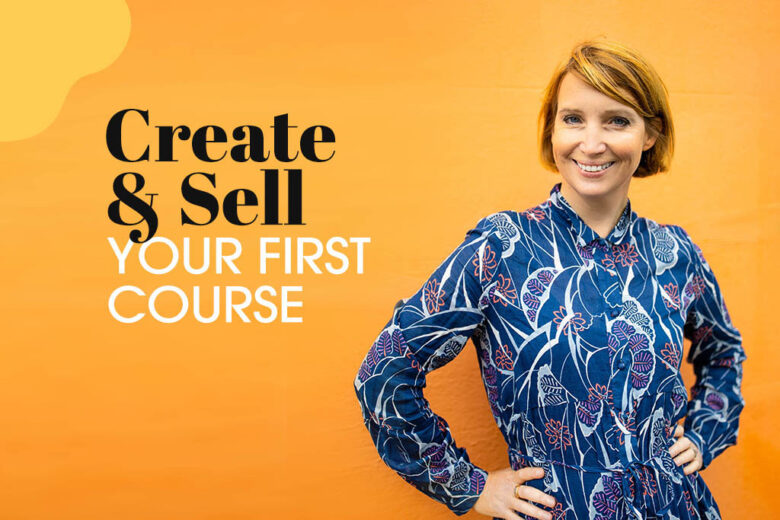 Think you need to start small on your first course? Find out how one woman make £20k on her first ever launch – and how you can too.

Over the past year I’ve taught dozens of people to create and sell their first course. In that time I’ve seen people have spectacular successes with their launch, and I have seen people invest significant effort for little return. From experience and with distance, I can see where people are going wrong, and what they are doing right.

And probably the biggest mistake new course creators make is pricing too low.

Why people price their courses too cheaply

A big misconception about getting started in courses is that you need to start small. That you haven’t yet ‘earned the right’ to charge much money for your course.

As a result, I see people create brilliant courses that are worth a significant amount of money to the people whose problem they solve. And then I see them launch it for far less than its worth.

They may start out with an ambitious price in mind, but as they approach their launch they go through a thought process that looks a little like this:

With every niggling doubt and self-limiting belief, they make the price lower and lower, until it’s small enough that they feel comfortable(ish) selling it.

But there’s a big problem with sending your brilliant course out until the world with a low price tag: it will never make you the money you deserve or want.

Why? There are two key reasons why you won’t make money on a course that you are selling too cheaply.

1) People won’t think it’s worth it

If you see a Gucci bag on a stall at your local market priced at £5, what will be your first thought? Probably, “It must be a fake.” That’s because we judge the value of something partly by the price someone is charging for it. And just as we don’t like paying over the odds for something, if it’s too cheap we assume there’s something wrong with it. That it’s not as good as it purports to be.

Think about it: what is cheap and discounted? Poor quality products. Seconds. Returns. Things that aren’t selling well. Last season’s stock. Old technology. Food that’s about to go off. Basically anything that is priced cheap is assumed to BE cheap.

So you can create all the fancy marketing you like, but if your course price doesn’t match your description of the contents, you’ll find it hard to convince people to buy.

2) The numbers don’t add up

The other reason you’ll struggle to make money with a cheap course is conversion rates. The more you do marketing, the more you realise that it all boils down to numbers. Once you have the right product, audience, messaging and funnel, it simply becomes about your conversion rate, and scaling.

And the average conversion rate for courses is around 1-2%. (Some people do more, some do less but this is the industry average.) This means that for every 100 people who see your marketing, one or two will sign up for your course.

So why does the price of your course matter? Think about it. You spend weeks planning your course, researching your audience and coming up with a marketing strategy. You also need to actually create and build your course itself. All in all you might put a LOT of hours into your course, and you want to earn a reasonable amount back.

The problem is that after creating your course, you went through the thought pattern I described above, and while you started out thinking you’d charge about £500 for your course, you’ve nervously gone to market with a price tag of £49.

The first thing you need to understand about marketing is that it takes no more effort selling a £500 product than it does a £49 product (if anything it’s often easier as it has a higher perceived value). And if your effort is the same for each individual sale, you’ll need to work 10 times harder to make £2,000 when selling at £49.

Just think how much extra work it is to reach 2,250 people more… just to make the same money in the end. And how do you even get your marketing in front of that many people?

As you can see the lower you price your course, the more work you need to do. And for most people starting out in courses, they just don’t have the numbers needed to make the money they want.

But still – who seriously goes out with their first ever course, with zero experience and prices it as high as, say, £2k? Actually, my friend Bobbi did just that!

Bobbi is a clairvoyant healer and works one-to-one with clients from her clinic in Los Angeles. She loves her work but she’s often booked up and was getting frustrated that she couldn’t help as many people as she wanted. So, earlier this year she told me she wanted to create a course.

The problem is that she had zero idea of where to start and no experience in marketing a course. So she joined Create and Sell Your First Course and came up with her course idea and built it.

A few weeks ago she told me she was almost ready to launch, and showed me the sales page she’d built with the help of a friend. The course was priced at $1997. We made a few tweaks to the sales page and I helped her write three sales emails that she planned to send to her mailing list of around 280 people over the space of 14 days.

Bobbi had the usual mix of course launch nerves and excitement, and when a sale came in within minutes after the first email went out, her expectations were high. However, after that first sale things went quiet. Very quiet.

Now as a course launch veteran, I knew exactly what was happening. That first sale was a lucky sale to a hot prospect who was ready and waiting to buy. But most people don’t buy that quickly; instead they move through the classic marketing journey of awareness, interest, evaluation and trial before feeling ready to make a commitment.

So I knew that Bobbi had people who may still buy, but who needed more time and more information. Bobbi however, was experiencing The Fear. She was worried her price was wrong and that no one was going to buy, and was ready to rip up her marketing plan and start again.

Luckily we had a chat and I told her to hold her nerve and trust the process. And it worked. By the time Bobbi closed her cart 14 days after launch she’d made over £20k.

So what are the lessons I want you to take from Bobbi’s experience? Firstly and most importantly, you CAN come out with your first course and charge £2,000 or more. As long as your course genuinely offers that value to enough people who need it and will pay, there is no reason why you can’t sell.

Also, the numbers DO work. Three days before closing her cart, Bobbi was a speaker at a big online conference and added another 200 people to her list. When I ran the numbers she had a total conversion rate of 2.4%. Good but not spectacular. I’m pretty much certain that had she priced her course lower she wouldn’t have sold any more places. But she would have made a lot less money!

And finally, you CAN create a course worth £2,000 the first time round. Bobbi offered a no-question seven day refund for anyone not happy with the course after it started. And no one who started the course asked for their money back. So it clearly was valued correctly.

Can you make £20k from YOUR first course launch?

If Bobbi’s story has excited you – great! How about channelling that excitement into creating and selling YOUR first course with my help?

I can show you exactly what helped Bobbi make £20k from her first course launch in my four-week program Create and Sell Your First Course. (I’ll even show you a simple pricing trick to stop you under valuing your course!)

You’ll also get an easy to follow, 14-day marketing plan you can use to sell your course just like Bobbi. It’s such a simple but powerful plan that many people go on to use it in other areas of their business too.

Of course, you don’t need to create a course worth £2,000 if you don’t want to, or if the thought terrifies you. Most people I work with price their first course at £199. And at that price you can make a good return on your first launch – you only need 10 sales to make almost £2,000.

So whether you’re hoping to make £20,000 or £2,000 from your first course launch, you can take the first step right now by signing up to Create and Sell Your First Course. As soon as you join you’ll have access to module one so you can start brainstorming your course idea with my help.

Already dozens of people have been through the process and created and sold courses – just like Bobbi. If you’re ready to join them, bite the bullet and sign up now. This could be the exciting start of a whole new income stream!