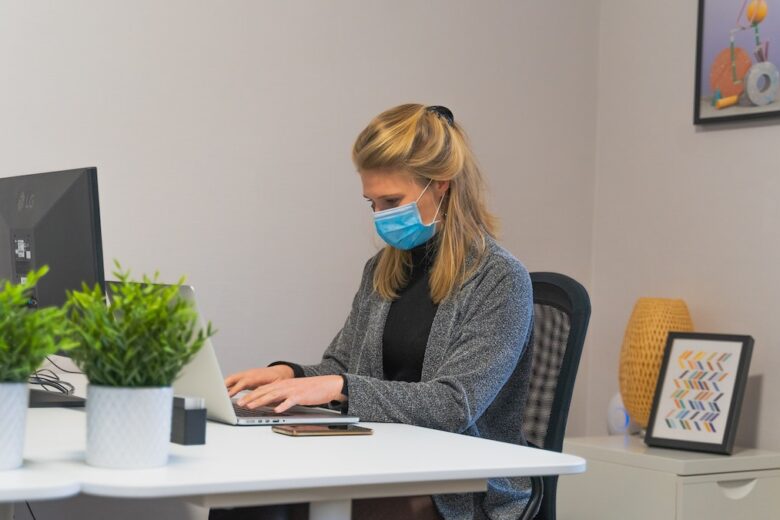 Leaders are sticking their heads into the sand when it comes to facing up to the reality of Omicron. And unless they take needed steps, the results may be catastrophic for their companies.

Omicron took over from Delta as the dominant coronavirus variant in the US in late December – hardly surprising when you learn that, according to a recent study, Omicron is 4.2 times more infectious than Delta.

The Pfizer two-shot vaccine offers just 33% protection from infection against Omicron. That means Omicron is much more capable of escaping vaccines and natural immunity. Similarly worrisome results emerge from studies of Moderna and J&J.

A Pfizer booster vaccine does raise protection to about 75%. Still, surveys show that Omicron has had very little impact on the willingness of Americans to get a booster, or even get a first vaccine dose.

The government is not taking any meaningful actions. That means companies need to take charge. Yet there’s a fundamental lack of vision about the future of work that causes companies to lose their competitive advantage.

The Omicron wave is coming

Scientists strongly believe that a major winter wave of Omicron is coming in the US. That’s because of other countries where Omicron is spreading.

Our genomic sequencing is much worse than other countries with similar cultures and climates, such as the UK where they have detected a doubling of Omicron cases every couple of days.

The only silver lining is that Omicron, so far, appears to cause a milder illness than Delta. Yet the World Health Organization has warned about the “mildness” narrative. It has been noted that the unvaccinated, the elderly, those with underlying health conditions and the people who don’t have a booster – are still severely at risk.

There’s been a worrying lack of meaningful action

The rapid disease transmission and vaccine escape undercut the less severe overall nature of Omicron. That’s why hospitals have a large probability of being overwhelmed, including in the US, as the Center for Disease Control warned.

Despite this threat, we see a lack of real action in the US. The federal government tightened international travel guidelines, which might have helped if Omicron wasn’t already detected in over half of all states. It’s exploring the possibility of Omicron-specific boosters, which would take at least three months to be approved, long after the Omicron wave sweeps over the US.

But it’s not taking the real game-changing steps.

Pfizer’s anti-viral drug Paxlovid decreases the risk of hospitalization and death from COVID by 89%. Due to this effectiveness, the FDA approved Pfizer ending the trial early, because it would be unethical to withhold the drug from people in the control group.

Yet the FDA has chosen to hasten the approval process along with the emergence of Omicron in late November, only getting around to emergency authorization in late December once Omicron took over. That delay meant the lack of Paxlovid for the height of the Omicron wave, since it takes many weeks to ramp up production.

Widely-available at-home testing would enable people to test themselves quickly and effectively. Doing so would prevent those with mild symptoms from infecting others. Yet the federal government had not made these tests available to patients when Omicron arose.

Its best effort was to mandate that insurance cover reimbursements for these kits, which is a nearly-meaningless gesture, as this creates way too many barriers. By the time Omicron took over, the federal government recognized its mistake and ordered 500 million tests to be made available in January. However, that’s far too late for the Omicron wave.

Companies are displaying a lack of vision

Unfortunately, most companies are not pivoting effectively to meet Omicron.

Some major companies such as Google, Uber, and Ford are bringing out the tired old “delay the office reopening” play. Instead of changing their work arrangements, those that have already returned are calling for stricter pandemic measures, such as more masks and social distancing,

Despite plenty of warnings from risk management and cognitive bias experts like myself, companies are repeating the same mistakes of failing to re-envision the future of work. That’s despite numerous employees quitting because of the compulsive plans of their employers to get them back to the office as part of the Great Resignation.

Leaders – and all of us – are prone to falling for dangerous judgment errors called cognitive biases. Rooted in wishful thinking, these mental blindspots lead to poor strategic and financial decisions when evaluating choices.

One of the biggest challenges relevant to Omicron is the cognitive bias known as the ostrich effect, which refers to people denying negative reality. Named after the myth that ostriches stick their heads into the sand when they fear danger. Delta illustrated the high likelihood of additional dangerous variants, yet the leadership at trillion-dollar companies – and the federal government – denied the reality of this risk.

In our desperation to get back to pre-pandemic times, we greatly underestimate the probability and impact of major disruptors, like new COVID variants. This cognitive bias is called the normalcy bias.

When we stick to our preconceived ways of functioning, this syndrome is called functional fixedness. This cognitive bias causes leaders used to office-centric culture and ways of collaborating to reject any alternatives.

Our minds naturally prioritize the present and downplay the long-term consequences of our current desires. That fallacious mental pattern is called hyperbolic discounting, where we excessively discount the benefits of orienting toward the future and focus on the present. A clear example is focusing on the short-term perceived gains of returning to the office over the competitive advantage of preparing for the long-term hybrid and remote future of work.

The way forward into the future of work is to defeat cognitive biases and avoid denying reality by rethinking our approach to office-centric culture. Companies should use a team-led approach and adopt best practices for innovation, collaboration, and accountability for hybrid and remote teams.

In short, instead of trying to turn back the clock to the lost world of January 2020, consider how you might create competitive advantage in the post-COVID future of work.