Are sponsors of the UEFA Women’s Euro 2022 REALLY champions of women? 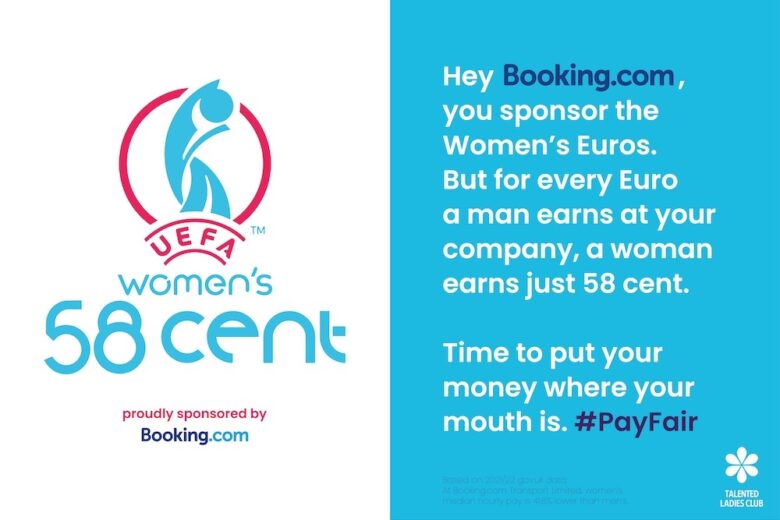 The UEFA Women’s Euro 2022 kicked off on 6 July, supported by global sponsors. But how many of the brands proudly supporting women’s football are REALLY champions of women?

If you look at the list of sponsors for UEFA Women’s Euro 2022 you’ll see many well known names. And it’s easy to assume that any company prepared to spend money supporting a female sports tournament is a champion of women.

But sadly this doesn’t appear to be the case. In fact, as creative advertising agency Truant London discovered, some of the tournament sponsors still have much to do to secure equality for the women who work for them.

Research using the latest gov.uk data shows that some of the UEFA Women’s Euro 2022 have very large pay gaps in their organisation. So while they are publicly cheering women on the pitch, it appears they are quietly underpaying their own female staff.

So while these companies are happy to shout about how they are ‘doing their bit’ for women by sponsoring the UEFA Women’s Euro 2022, here are some of the pay gaps they’re less happy to broadcast:

It’s disappointing enough that women are still battling a significant gender pay gap in companies like these, without them having to witness them publicly championing equality.

Here are just some of the marketing messages shared by sponsors of the UEFA Women’s Euro 2022 which seem rather hypocritical when compared to their own gender pay gaps.

Booking.com’s mission is to “make it easier for everyone to experience the world”. And their official UEFA Women’s Euro 2022 campaign focuses on inspiring the next generation of female football players. They can start by paying women the same rates for the same work as men, rather than a pitiful 58 cents to the Euro, so they have equal access to opportunities created by money.

Visa’s campaign for the tournament focuses on the sentiment “When more of us play, all of us win”. Sadly this isn’t the lived experience of the women who work for the company who seem to ‘win’ less than their male counterparts.

And finally, LinkedIn’s Vice President, Communications and Brand, International, Ngaire Moyes, said of their sponsorship of the championship: “At LinkedIn we’re championing a gender equal world that’s diverse and inclusive…” Maybe the company should start by looking closer to home, and pay their own female staff an equal salary?

(You can read some of the brands’ response to the challenge on their gender pay gap record on Campaign’s coverage of our story.)

Sadly, it seems that many companies today are far more interested in investing time and money in promoting the concept of an equal world, and sharing idealistic campaigns that champion fairness, than they appear to be in actually being fair to their female workforce and paying them the same salary as men for the same work.

So whichever team wins the UEFA Women’s Euro 2022 campaign, it appears that women are ultimately the losers today – STILL.