Working mum breadwinners on the rise in the UK 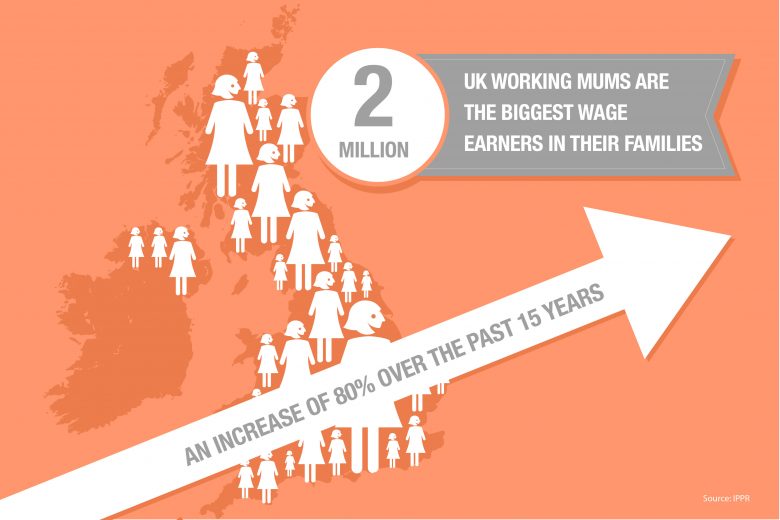 Earlier this year, research revealed that women were the main breadwinners in 40% of US homes. Now a new UK report shows that the number of female breadwinners in Britain is on the rise too.

Research for The Condition of Britain report by thinktank IPPR discovered that two million working mums are the biggest wage earners in their families – an increase of 80% over the past 15 years. In 31% of couples with children the main breadwinner is a working mum (up from 18%), and the employment rate of single mums has risen from 43% to 58%.

The report shows that the number of maternal breadwinners has increased across the board – occurring in all family types and in every age and income group. It also reveals that over a third of working mums with a degree are the main breadwinners in their family (up from 29%), as are a quarter of mums without degrees (rising from less than 20%).

Other key findings in the report include:

Dalia Ben-Galim, associate director at IPPR, said of the findings:

“The balance between breadwinning and caring has changed; it can no longer be assumed that the dad is the primary breadwinner in a couple. As women’s employment outside the home rises, dual-earner couples are more common.

Most families need two earners simply to make ends meet, and increasingly women’s earnings are a necessity. A rise in the employment rate of lone parents means mothers in this position provide the sole income for their family.

But despite more mothers than ever before being the primary breadwinners, many mums still face significant barriers to entering and remaining in work. These include a lack of flexible work opportunities, the high cost of childcare and parental leave entitlement that is focused on mothers.”

Whether you’re a working mum supporting your family or not, you’ll find lots of practical advice and expert strategies to help you find rewarding flexible work, go freelance or start a business in our Help section.