Why success is is much closer than you think 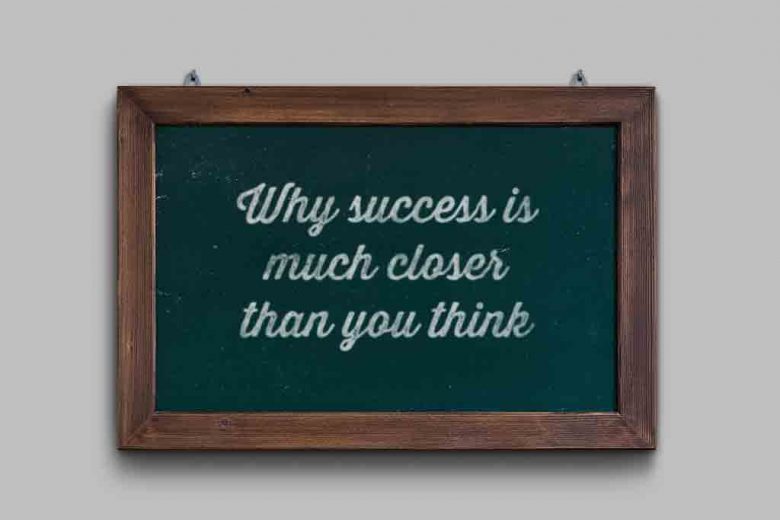 When starting a new business or freelance career, success can feel frustratingly elusive. Find out why it may be closer than you think.

It’s not easy starting a new business or launching a freelance career. In fact, it can be frustratingly hard. You can toil away for weeks, months, even years before feeling like your new enterprise is a success.

No wonder then that as many as 50% of start-ups fail within the first two years. So what can you do to beat these odds? According to freelance copywriter and owner of creative agency Swagger & Spice Celia Balmer the secret is to just keep plugging on. Day, after day, after day…

You can keep refreshing the notifications tab on Twitter as much as you like and checking your emails at 3am when you can’t sleep.

And yes, maybe that that one big fish has come home to roost in the time since you put your sleep mask on. Maybe an exotic foreign client from across the pond has just woken up and pausing only to grab a cup of *cawffee* has barged into your inbox begging, pleading, virtually blackmailing you to handle the worldwide launch of his international conglomerate. Hmmm, or maybe you should just get back to bed.

The reality is you’re probably not going to find yourself at the centre of a Twitter storm anytime soon and that one big fish/bird hybrid client – remember him? The Transatlantic dude with a big budget, the one that’s going to feed you and your family from the finest range forever? He’s nothing more than a pipe dream, a myth, a mirage.

He doesn’t exist anymore than Nessy or a smart phone with a decent battery life.

Success creeps up on you

We humans have a nasty little habit of expecting this great big win to appear on the horizon with a sign around its neck marked “Success!” Something we can grab hold of and say “Look everyone, I’ve done it. I’m a big success.”

But it doesn’t work that way. Success creeps up on you, like crow’s feet or that groove on you forehead that makes you look like you’re angry all the time. You don’t realise it’s there until one day you glance up from your keyboard and think holy shit. I did that? Did I do that? I did do that (and crickey, maybe it’s time I started started massaging my face).

Others will see it in you long before you dare to accept it as reality. They’ll point to your achievements, your noticeable improvement, but you’ll just shrug in a anyone-could-have- done-that kind of way. Listen smarty pants, anyone could have put a shark in formaldehyde too – but they didn’t, did they. Take credit where credit is due okay?

Success is not glamorous. It’s less of a sashay down the red carpet while people scream your name and more of a slouch about the house in old slippers and a pair of forgiving trousers. I mean that literally.

Everyone has that feeling sometimes, the one where frustration, fear and boredom all sort of rub up against one another. That feeling that keeps you going back to twitter for validation instead of starting to write a new blog post. Or checking your website stats rather than picking up the phone and attempting a cold call or two.

Yes I got a retweet! Somebody appreciates me! I am worthwhile! Woo hoo I’ve had eight visitors today, BlogHer here I come!

That listless, can’t be bothered/no longer see the point/WHAT AM I DOING feeling – ugh it’s the worst – it’s all just part of the game. Part of the process towards that glorious moment of sweet realisation that you already are everything you want to be. Successful, talented and totally a great yogi.

Just because you can’t see progress doesn’t mean it’s not there.

Every day you get closer to success

Every day you play the game, you improve. Who cares what the numbers say, the traffic stats, bounce rates, click throughs – they’re just numbers on a screen. They’re not talent, discipline or anything other than surface level indicators. They’re nothing but a distraction from your real goal. To become the best.

Because surely that’s what it all boils down to? Becoming a tornado of talent, twisting and spiralling so damn hard your clients can’t help but get carried away by it and the competition can’t get near it?

Raw talent isn’t quantifiable. It can’t be measured by numbers and follower counts. So I say relish in the anonmynity. Roll around in it. It’s no big deal. In fact it’s got its upsides – just ask Monica Lewinsky.

And look, anonymity means freedom to be yourself, to write what you mean and do what you want without judgement. It’s when people are looking that’s when the “F” word creeps in – FEAR. Fear is what stops people moving forward.

So keep writing, blogging, calling, emailing, commenting, tweeting and posting. Just keep hustling no matter what. Give the surface level success indicators the finger and get back to doing what you do best – riding the white knuckle ride that is your biz.

Because a tornado in the garden? It can’t be ignored forever.

For more straight-talking business advice, visit Swagger & Spice, a creative business armory for people who want to slice through the clutter of competition, fast.
Last updated on Nov 23rd, 2022 by Celia Balmer