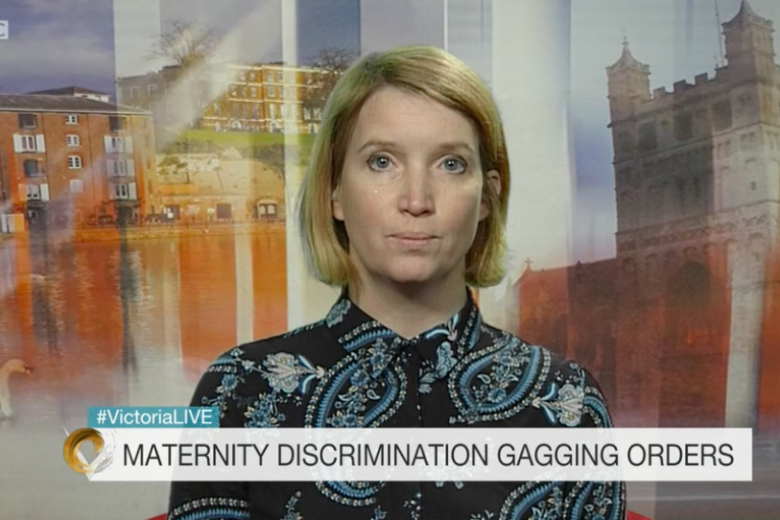 Find out why NDAs are being used by employers to cover up maternal discrimination, and why we need to stop allowing companies to silence mother in this way.

This morning I filmed a short segment for the Victoria Derbyshire Show on BBC2. The topic was non-disclosure agreements (NDAs), and I was asked to talk about my own experience in being forced to sign one after being fired for being a mother.

The subject was raised following research by Pregnant Then Screwed (PTS) which revealed that 91% of women who were being forced out of their job because of pregnancy or maternity felt like they had no option but sign an NDA. And 70% said it had a negative effect on their mental health.

Here’s what one woman told Metro:

“I signed the NDA and left quietly. It has been over a year and there isn’t a day that goes by when I don’t feel angry and hurt. Who knows if I will ever get my career back on track, but at the moment, it feels impossible.”

Jodie Brearley from PTS will give oral evidence in Parliament today on the ‘pernicious’ use of NDAs and what can be done about them.

More than 15 years ago, I too was made to sign an NDA. On one otherwise normal day at work, I was called from my desk into a meeting (it would be more accurate to describe it as an ambush, as that is what it felt like). In the ‘meeting’ were my two line managers and the company’s HR director (all male).

I was told that I had 24 hours to sign an NDA and leave the company (with no compensation), or they would start disciplinary proceedings against me. It was made clear that if I chose that option, I would be fired, with my reputation ruined, within six weeks.

When I asked why this was happening, I was told: “You’re shit, you’ve always been shit, you know that.” My two line managers also told the company’s HR director that I had received verbal warnings for my performance. All lies.

The real truth was that in the short time I had been at this agency (I was unaware I was already pregnant when I accepted a role there) I had won them several industry awards for a number of pieces of work, and was even paid a bonus while on maternity leave in appreciation of this. I had also received a glowing appraisal less than two months before this meeting. (One of the two managers who’d called me shit also told me just two days later that he’d ‘always rated me’.)

I sought legal advice following the meeting and was told it was a clear case of sexual discrimination and constructive dismissal. However, I was advised not to fight it, because it would take a year to come to tribunal (the thought of living with this hanging over me was unbearable), I would have to pay for my legal fees with no guarantee of a win, and win or lose, my career in my male dominated industry would be over.

So I signed the NDA, and began my sentence of silence.

NDAs are a legal way of covering up wrongdoing

I say ‘sentence’ because that is exactly what it felt like. The crime in this case had happened to me. I was the victim, and yet I was also the one who was punished.

I lost my job but, worse still, I was forced to keep the perpetrators’ dirty secret. The fear of falling foul of the legal contract I had signed meant that I couldn’t tell anyone what had happened to me. Instead I had to be complicit in the lie my employers told me to tell. Emotional abuse heaped on the trauma of being fired and told I was “shit”.

This meant that I was isolated in my experience and could not get any emotional support. Importantly, it also meant that this crime went under the radar. No one was aware it had happened to me. (I’ve since learned that my employers had used the same tactic on more than a dozen people in two years.)

So every woman (and man) who is treated badly or illegally by their employer and subsequently forced to sign an NDA believes it is just happening to them. The wider world thinks it’s not happening at all. And so the abuse continues.

Thankfully, more than 15 years after my experience the world is a different place. Thanks to the work of organisations like Pregnant Then Screwed, and research by the Equalities and Human Rights Commission, maternity discrimination makes headlines.

We still have far to go (judging by PTS’ latest survey), but companies can no longer openly discriminate against mothers.

Women are still scared of talking about NDAs

Tellingly, women are still fearful of their NDAs. The BBC told me that they had found it very difficult to find a woman who would talk about signing one; we’re still scared of being sued.

It took me 10 years to have the confidence to tell my own story. And I am so pleased that I did. Dozens of women have contacted me over the past few years to share their own experiences, and say they’re grateful that they no longer have to feel alone.

Unless we speak out about this, NDAs will continue to silence victims of maternal (and other) discrimination, and more women will start their own sentence of silence; forced to keep another company’s dirty secret.

What can you do if you’re experiencing maternal discrimination?

If you’re experiencing maternity discrimination, we recommend visiting the Pregnant Then Screwed website for advice and support.

I also recommend that you take pre-emptive steps to protect yourself from maternal discrimination as far as possible:

Why do I recommend this? In my own experience, I believe I was fired because I left work at 5:30pm every day. I was always the first to leave my open plan office. My manager had warned me: “Be careful, perception is everything” the day I returned from maternity leave. Clearly the perception was that I wasn’t working as hard as everyone else (this wasn’t the case as my appraisal had been glowing).

Were I to turn the clocks back 15 years, I would have asked for meetings with my line managers and HR to clarify my working hours and make it clear, on the record, why I was leaving at that time. And I would have asked for clear goals to work towards in my job. This may not have averted the eventual outcome for me, but it would have given me more ammunition in fighting it.

The ending was happy for me

Happily, things worked out well for me. I was freelancing within days of being fired, and less than a month later was earning £10k a year more in a better agency. I stayed there happily for nearly four years. My former company, meanwhile, I am very happy to report no longer exists.

However, many other women are not as lucky. Which is why we think it’s important that this issue is brought out into the open and, hopefully, the use of NDAs for these purposes will be reviewed.

You can watch Hannah Martin on the Victoria Derbyshire show here