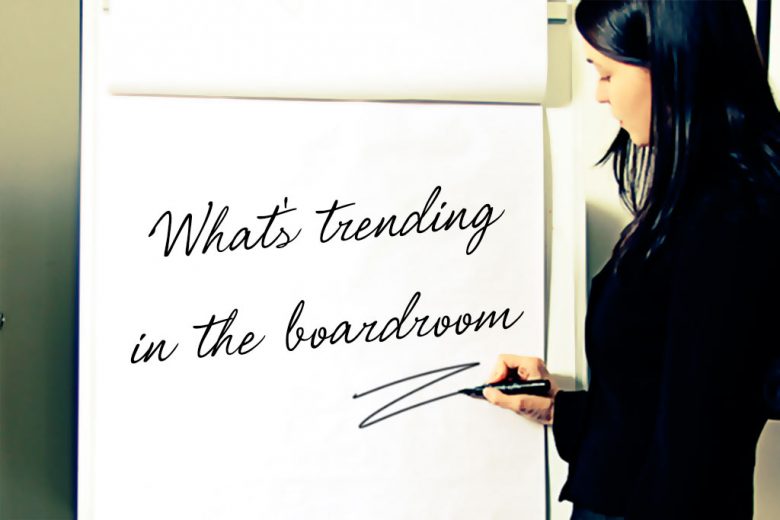 What’s trending in the boardroom right now? Read a quick run down of the latest issues and legislation business owners need to be aware of.

If you run your own business, it’s important to stay up to date on new rules and legislation changes. To help you understand what’s been happening recently, business student Rebecca Moore sums up what’s rending in the boardroom right now.

There is no denying that 2015 saw a significant shift within our culture. Some epic issues stormed straight into the public domain and left us all feeling empowered, entitled, due a little more respect and ready to take a stance about what we believe in fair and right when it comes to our own circumstances.

The shift served to reinforce the fact that social media has become the number one platform to make sure our voices are heard and has left large corporations, organisations and business more than a little anxious with regards to the power that these channels give us and the vulnerable position it leaves them in.

It seems that some of the stories we have seen on both social and traditional media have been brought into the board rooms, and are ready to begin hitting other levels within a business. I have put together a few of the relevant issues that I think will be at the forefront of both employers and employees agendas in 2016.

This year we will see the amendment from the Small Business, Enterprise and Employment Act 2015 begin to be implemented across the UK.

Although attitudes have undeniably changed within the last decade when it comes to women’s roles and capabilities within the world of business, it is still a fact that at present women still earn 9.4% less than their male counterparts.

This results in a difference of around £100 per week on average, which is a shocking figure, especially when we take a step back and realise that its 2016; the gender pay gap HAS decreased – in 1997 is stood at 19.7%, but the issue here is that it is happening far too slowly.

For companies with more than 250 employees, the reporting is mandatory. Companies are initially required to gather information about employees pay, occupational segregation and how jobs are graded. They are also required at an early stage to assess which employees are doing ‘equal’ work, using The Equality Act 2010 definitions along with a Job Evaluation Scheme.

The information gathered will enable employers to identify pay gaps within the business, resulting in the mean and median calculations being reported across levels of seniority.

“I am announcing a raft of measures to support women in their careers, from the classroom to the boardroom, leaving nowhere for gender inequality to hide. At the same time, I’m calling on women across Britain to use their position as employees and consumers to demand more from businesses, ensuring their talents are given the recognition and reward they deserve.”

There has been a wave of backlash against the reporting; from disappointment in the length of time it will take for the results to be published (2018) to the opposition to the fact that firms will be ranked in accordance to their findings,

Carolyn Fairbairn, CBI director general, said the ranking “should not be used to name and shame firms, as data will only be able to present a partial picture, particularly given factors such as the mix of part-time and full working and sectoral differences.”

The transparency required within this reporting will of course cause some controversy when it comes to brands reputation, it could even mean that employee morale and productivity could be compromised. If recent equality campaigns such as #LoveWins and #BlackLivesMatter teach us anything, it’s that when it comes to inequality it’s that the ugliness in its entirety must be addressed in order for drastic change to happen.

The average life expectancy has increased in recent years and (understandably) the Department of Work and Pensions has become nervous at the prospect of the state pension stretching to cover in each of us spending in excess of 20 years in retirement. It is for this reason that The Workplace Pension was introduced. It also appears to be that the ‘age of instant’ we are currently living in has meant that saving for our future is about as far down on the agenda as it can be right now.

You MUST have seen the adverts by now about The Workplace Pension, and the work leading up to the auto-enrolment of said pension scheme has been carried out behind the scenes for the past 12 months or so; if we aren’t going to be pro-active in saving for our golden years then the government sure as hell is going to be!

It is now compulsory for employers to enrol every eligible worker into the new pension scheme before October 2018. Company pensions have been on offer for a long time, the difference here is that the onus is entirely on the business – it is also compulsory for them to contribute to the fund (the government will also be contributing).

If workers are not deemed eligible, it is possible for them to ‘opt in’ to the scheme instead, however in this case, the employers is not obligated to contribute, although there will still be a government contribution. This has led to the upset surrounding the understanding that women will be hit hardest as those working part time will not meet the earnings threshold, that looks set to rise to £10,000.

I would be extremely interested to see if this would motivate more mothers to return to full time work, or if the sky high childcare we are faced with in UK would still outweigh the pull of future proofing our lives.

The European Court of Human Rights recently made a ruling that it IS acceptable for an employer to monitor their employee’s private digital communications when sent during working hours. The issue was brought into the public domain following the recent Romanian case, in which an employee was fired for sending messages to his wife and brother from his business accounts during working hours.

Companies are coming to rely more and more upon online communication as the technology makes it possible to take advantage of the talent pool across the globe. Despite the ruling, the concept of online monitoring seems to be somewhat of a grey area and unregulated snooping has also been condemned by the ECHR.

This is an argument that definitely has 2 solid arguments; on one side, employers want to be able to ensure that time they are paying employees for is not being wasted but on the other, employees want to feel degree of trust and freedom.

Sarat Pediredla, CEO of Hedgehog Lab is very clear on his stance:

“As a company that fosters and encourages open culture, we are strongly against monitoring online communications during work hours. We actively encourage our team to be ‘social’ and genuine, which is to use Twitter, LinkedIn (vital for our business) and even Facebook. To then start monitoring it would a) violate our basic premise of trust and treating our team members with respect and b) directly impact our ability to build our brand and gain greater exposure.”

Taylor Rose TTKW offers some advice from a legal perspective:

“Businesses need to make their policy on the issue clear and communicate this to staff, ideally through their contract of employment. As our personal lives can often blur into the workplace, it’s a reminder for many companies of the importance of setting clear guidelines on the use of personal devices in the workplace environment.”

This post wasn’t written to be inflammatory, or to scaremonger. From experience, it seems those working within a business are often the ones with the least amount of knowledge when it comes to the issues that could potentially affect them. Often issues such as the ones detailed above can help to provide clarity and vision when it comes to you day to day working role, or future vision.