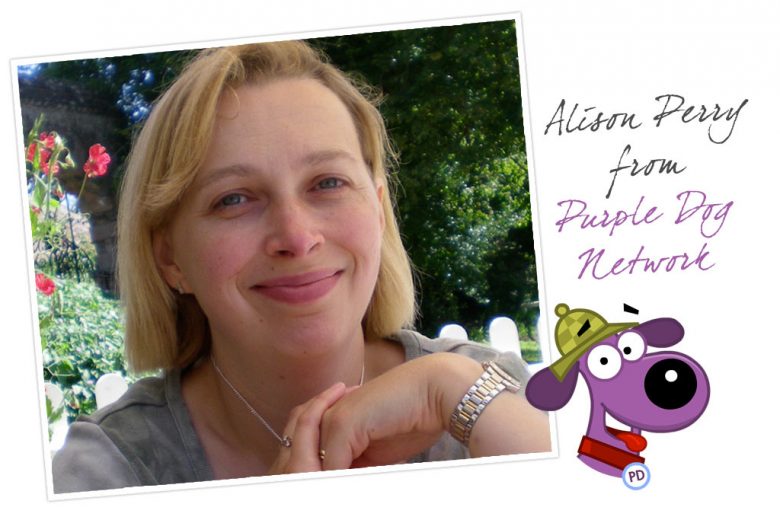 Mum of two Alison Perry started her Twitter business, The Purple Dog Network, in 2011. Within two months she was making enough money to give up her job. And today she has a team of freelancers around the country working for her. We find out how she did it.

I qualified as an actuary in the insurance industry. By the age of 30, I’d worked my way up to a senior management position, moving into marketing, planning and strategy. I worked a lot of hours in what was quite a stressful environment.

What happened after you had children?

I was 33 when I had my first daughter and I was adamant I didn’t want to go back to work. There was no way I wanted to work full time, and I didn’t believe I could do my role justice on a part time basis.

So my husband and I downsized our house and I gave up work. At the time my husband had not long started his own business so it was a big step for us. I took on a Kumon franchise and ran that for a couple of years, by which time the girls were starting school and I felt I could commit to a job again.

I applied for a full time job in the NHS, and when I was offered the position asked if I could work part time instead. I was lucky because my boss was very understanding, and she just asked how many hours I wanted. I ended up staying for a couple of years but the job didn’t give me the balance I needed. I felt guilty about missing out on my children’s lives and bad if I needed to take time off work when they were ill.

How did you start The Purple Dog Network?

In the beginning it was just a hobby. I started in June 2011, and within a month I had 2,500 followers on Twitter. After two months I was making enough money to quit my job, and by four months I had 10,000 followers! I think I was lucky – I hit it at the right time and lots of people copied what I was doing. Two years on I have more than 40,000 followers.

What was the idea behind The Purple Dog Network?

What else do you do?

I always said I wouldn’t tweet for other people because I think Twitter is such a personal medium, and it’s better if people can tweet themselves. But I realised that many companies didn’t have the resources to do this, and wanted to pay someone to do it for them. So now I have a team of freelancers who tweet on behalf of my clients. It’s turned into the fastest-growing part of my business.

How do you find your freelancers?

I find them on Twitter! I’m always looking out for good tweeters – people who are great at engaging others, write interesting tweets, ask questions, comment on tweets and retweet. Basically helpful Twitter citizens. When I find someone, I get in touch and ask if they want to tweet for me. I can also train people up to be a good tweeter.

How else can you help businesses?

As well as tweeting for them, I offer a range of packages designed to help businesses get onto – and make the most out of – Twitter. I have a starter pack in which I show clients around Twitter, explain how it works from a marketing perspective and help them get their first 200 followers. I also have options for businesses that are already on Twitter but need a bit of a boost or even a health check – I can help them understand why they may not be getting the results they want from Twitter.

There’s also a phenomenon on Twitter called the glass ceiling, when you’re following 2,000 people and can’t follow any more. I have another service that helps people break through that ceiling.

I explain to my clients that you can spend hours a day on Twitter, but if your time isn’t focussed, it won’t get you anywhere.

What advice would you give someone who was new to Twitter?

Lots of people are very nervous when they first tweet. But I always tell my clients, if you have 100 followers only between 1 and 3% of your tweets are getting read, so there’s not much damage you can do! People worry about repeating themselves but in fact you have to say the same thing a lot of times before people take notice, so you need to find many ways of saying the same thing.

Twitter is very noisy, and to get heard is challenging. In the early days you need to focus on getting followers and engaging with them – if you do they will see your tweets. Just broadcasting is often a waste of time, but it can help if someone looks at your profile – it tells them interesting and useful things about you which they may not have seen on their timeline.

I’m loving it! I work first thing in the morning for an hour or so before school. After I’ve taken the kids to school I then work solidly until they come home. I often work in the evenings, too. The best thing is that I can take time out when I want, or if I need to do things with the kids. I can then just catch up on other days.

How has The Purple Dog Network evolved over time?

When I first started, I never dreamed of making money from it. To start with, I did it to help my husband’s business, and to build a network of businesses. I also wanted to help other businesses to network with each other. The Purple Dog Network may have developed since I first started, but my overall aim is still the same – to help small businesses find connections on Twitter, raise their profile, promote their business and get leads and contacts.