Think making a film is hard? Try having a baby half way through! 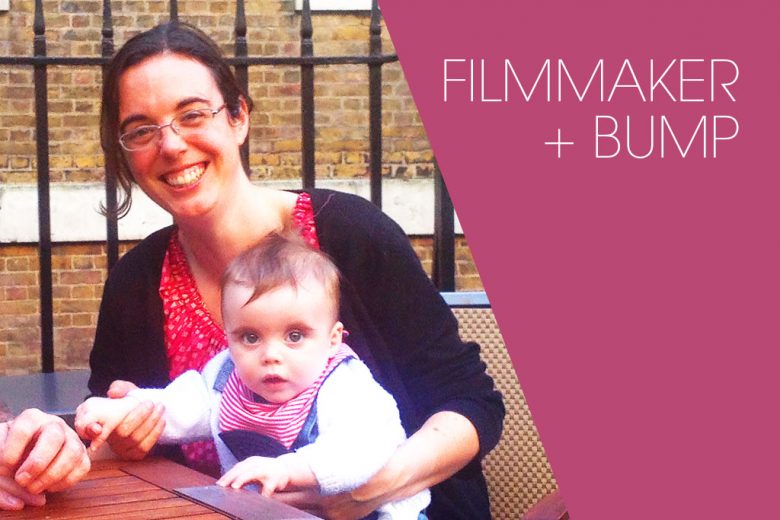 If making (and funding) a film wasn’t hard enough, read how one mum coped when she found out she was pregnant half way through the project!

Vicki Lesley from Tenner Films tells us what inspired her to make her own movie, how she’s funded it mostly from contributions of tenners and how she dealt with a happy surprise half way through the project.

Why I decided to make a film

Back in 2006, I was a busy freelancer working on popular factual TV shows for broadcasters like the BBC, Channel 4 and Discovery, travelling the world and generally having a great time.

But deep down I yearned to work on something more serious – something that could make a real impact on people, on the world even. Looking back, I was also soon to turn 30 and I think I was wondering where my life was heading as I left my rather hedonistic 20s behind.

I had a big, crazy idea

So I made a decision – with hindsight a much bigger and consequential decision than I realised at the time (which was probably a lucky thing!)

I decided I was going to make an independent feature documentary on something that mattered. I could never have imagined then the epic journey I was embarking on, one that ten years later would only just be reaching completion.

Stepping out of the comfort zone of my regular TV work was daunting. But I was ready for the challenge. The first step was choosing what to make the film about.

In my spare time, I did a little bit of volunteering for Greenpeace and Oxfam local groups and I talked to some of my friends there about my plan.

Nuclear power was just coming back into the news then as a potential grand solution to climate change. I was intrigued. As a child of the 80s, I remembered the disaster at Chernobyl and felt instinctively wary of nuclear power.

But here it was apparently on the brink of a comeback. How and why had that happened? It seemed like a genuinely important issue – one I could really get stuck into and perhaps even influence the debate into by making a film.

Raising the money – a tenner at a time

And so, taking the bull by the horns, I emailed everyone in my address book and told them I was going to make a documentary and asking them if they could give me a tenner. If 10,000 people could do that, I reasoned, then I’d have the budget to make this film.

I’d never heard of crowdfunding then, but that was what I was doing. I set up a company and called it Tenner Films – after my plan to try and raise a big pile of tenners! Of course, I don’t know 10,000 people, but many of my friends and family obliged with an initial donation, and so my journey began.

Over the next seven years I continued my work in TV, but interspersed it with trying to get my own documentary off the ground. I raised money through crowdfunding, but also through grants, and later from Creative England and from private investors who bought shares in the film – enough eventually to give up the TV work and focus on the film full time.

I got a very experienced executive producer on board, and we pitched to international broadcasters at major film festivals in the UK and Germany who received the film with interest and enthusiasm.

I filmed hours of fascinating interviews with politicians, engineers, nuclear industry chiefs and anti-nuclear campaigners as I delved into the politics and history of this most controversial and divisive subject.

And then I fell pregnant.

It was a bit of a surprise though of course a very happy one. But what would it mean for my film? I worried about telling my producer the news (in the event he was delighted for me) – and wondered how on earth I could continue what was already a really tough endeavour with the new factor of a baby to consider. But I was determined that I wouldn’t let it stop me finishing a project that I really believed in.

When I was six months pregnant, I completed a major filming trip around the USA – my bump was certainly a conversation starter and in some ways even an advantage. I think carrying a child made me connect with some of the big issues my film addresses about powering our planet and our relationship with nature, with technology and with future generations in a deeper way.

But despite my swollen ankles and constant back ache, becoming a mum still seemed quite abstract to me.

Then, in January 2014, my son was born – and of course, everything changed. I wish I could say it’s been easy. But as all working mums know, wearing both hats is a really big challenge.

For the first nine months, my film was completely on hold. Then my little boy started spending a few hours each week with a childminder so I could start to get back into things again. We’ve gradually built up the hours until, as I write, I have three days each week to work on the film.

I’ve found it far harder than I thought to combine the mental and emotional challenges of being a mum to a baby and now a toddler with the headspace you need to slog away on an independent film.

Filmmaking isn’t a 9-5 job, but with childcare you have to stop what you’re doing when the hours are up no matter how ‘in the zone’ you are. And it’s not always easy just to pick up again where you left off two or three days later.

More pragmatically, but no less importantly, there is the financial impact. As my film is totally independent, with funding piecemeal and extremely hard-won, I don’t currently earn anything from working on it.

But I’m lucky that my partner is behind me all the way in bringing the film to completion. As a family we’ve made a commitment to living with one income until this project is done – he shares my belief in the power of film to inform and inspire people to see and think differently (ironically he’s also a physicist by profession so has been pretty helpful in man-splaining the finer points of radioactivity to me!)

A film with impact

Happily after a decade of this eventful filmmaking journey, the end really is now in sight. My film ‘The Atom: A Love Affair’, on the world’s tumultuous relationship with nuclear power over the past seven decades, is now very close to completion.

We have a number of international broadcasters and distributors waiting to take a look at the fine cut with a view to acquiring it for television, and our own plans for a nationwide cinema release and outreach campaign taking shape (I’m working with a very experienced producer who’s taken many other independent documentaries on a similar journey so it’s all pretty exciting).

For nuclear power’s supporters, these are uncertain times. Hinkley C in Somerset remains mired in indecision, even more so after the Brexit vote. I’m so pleased that my years of hard work are finally on the brink of bearing fruit in the shape of a film that can shed real light into how we ended up where are today – and into the kind of energy future we want for ourselves, and for our children.

Help me reach the finish line

If my story has inspired you in any way, I would love it if you could visit my crowdfunding page where you can watch the trailer and donate to pre-buy the film or get lots of other fun rewards.