The top 11 inspiring TED talks (as chosen by you)! 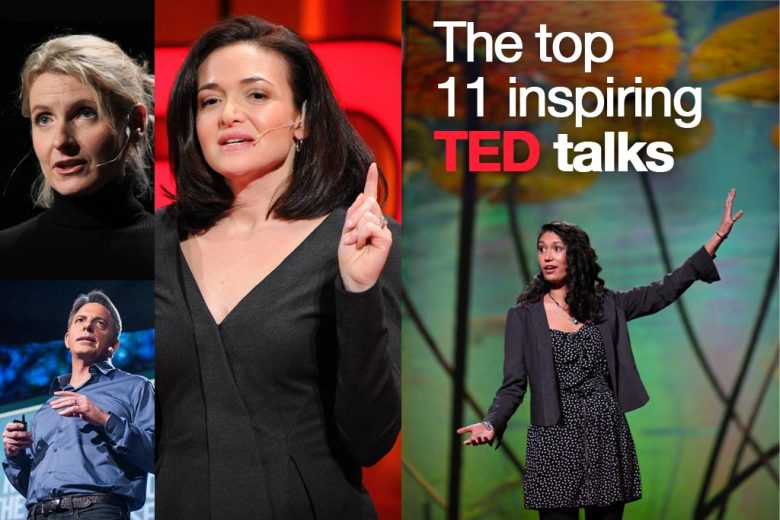 We make no secret about being huge TED fans. We’ve learned so much and been hugely inspired by listening to some of the world’s most experienced and knowledgeable experts and leading thinkers.

So inspired in fact, that we thought it was selfish to keep the cream of TED all to ourselves. Instead, we decided it would be a great idea to share some of the gems we’ve found – and discover some new ones.

The top 11 most inspiring TED talks – as chosen by you

So a few weeks ago, we asked everyone in our LinkedIn group to name their all-time favourite TED talk. And here’s the magnificent 11 they came up with.

Elizabeth Gilbert, the author of Eat, Pray, Love, muses on the impossible things we expect from artists and geniuses — and shares the radical idea that, instead of the rare person “being” a genius, all of us ‘have’ a genius. It’s a funny, personal and surprisingly moving talk. Watch now

Rita Pierson on why every kid needs a champion

Rita Pierson, a teacher for 40 years, once heard a colleague say, “They don’t pay me to like the kids.” Her response: “Kids don’t learn from people they don’t like.’” A rousing call to educators to believe in their students and actually connect with them on a real, human, personal level. Watch now

Simon Sinek has a simple but powerful model for inspirational leadership all starting with a golden circle and the question “Why?” His examples include Apple, Martin Luther King, and the Wright brothers. Watch now

Sheryl Sandberg on why we have too few women leaders

Facebook COO Sheryl Sandberg looks at why a smaller percentage of women than men reach the top of their professions — and offers 3 powerful pieces of advice to women aiming for the C-suite. Watch now

Tony Robbins on why we do what we do

JK Rowling on the fringe benefits of failure

At her Harvard commencement speech, Harry Potter author JK Rowling offers some powerful, heartening advice to dreamers and overachievers, including one hard-won lesson that she deems ‘worth more than any qualification I ever earned’. Watch now

Amy Cuddy on why your body language shapes who you are

Body language affects how others see us, but it may also change how we see ourselves. Social psychologist Amy Cuddy shows how “power posing” — standing in a posture of confidence, even when we don’t feel confident — can affect testosterone and cortisol levels in the brain, and might even have an impact on our chances for success. Watch now

Sarah Kay on if I should have a daughter

“If I should have a daughter, instead of Mom, she’s gonna call me Point B … ” began spoken word poet Sarah Kay, in a talk that inspired two standing ovations at TED2011. She tells the story of her metamorphosis — from a wide-eyed teenager soaking in verse at New York’s Bowery Poetry Club to a teacher connecting kids with the power of self-expression through Project V.O.I.C.E. — and gives two breathtaking performances of ‘B’ and ‘Hiroshima’. Watch now

Tracey Spicer strips back her daily routine and challenges us all to use our time more productively. Tracey is a respected journalist who has worked for many years in radio, print and television. Watch now

Activist and fundraiser Dan Pallotta calls out the double standard that drives our broken relationship to charities. Too many nonprofits, he says, are rewarded for how little they spend — not for what they get done. Instead of equating frugality with morality, he asks us to start rewarding charities for their big goals and big accomplishments (even if that comes with big expenses). In this bold talk, he says: Let’s change the way we think about changing the world. Watch now

Sheila Norgate on the cultural smoking gun, and the issues still thwarting women and girls today

In 1994, Sheila Norgate (visual artist, performer, feminist, author, lesbian, and lover of dogs) came across an old etiquette book for girls. It changed the trajectory of her life, and explained why Norgate grew up feeling truncated and pruned back.

Norgate’s collection of vintage books on etiquette, beauty, charm, and home economics, has swelled to over 100 titles and she now works – through performance and writing – to connect the dots between this cultural smoking gun, and the issues still thwarting women and girls today. Watch now

We’ve loved watching other people’s pick of TED – and are hungry for more. So please share your favourites too.

Which TED talk has left you with goosebumps, or fired you up into positive action? Made you look at life differently, or uncovered a new world of potential?

We’d love to discover what we’ve missed – and share it with our readers. So please let us know in comments, tweet us or post a link on our Facebook page – and help spread a bit of TED wisdom around the world!