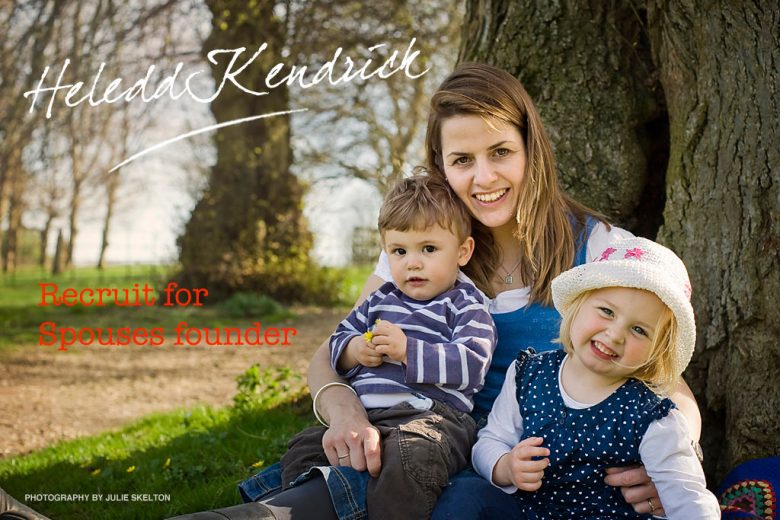 Heledd Kendrick had no idea about the career prejudices military wives face until she became one herself. So she decided to do something about it, and set up a business to help military spouses, and shape the way modern businesses source and retain quality employees.

I worked with Olympic three day event horses for most of my life, which taught me a lot about tenacity and determination. But when I reached 30 I realised I couldn’t keep  falling off horses. So I trained to become a racing journalist and editor before I married.

What inspired you to start Recruit for Spouses?

I had no idea about the prejudices out there against military wives until I became one myself. I’m a terrible singer and I burn cakes, however there seemed to be an undiscovered workforce among the military spouse community so I thought I would start a recruitment business instead.

What are some of the specific issues that military spouses face?

Businesses see military spouses as too transient because we may move in a couple of years. They say to us, why would we only employ someone if they are here for 2–3 years, and we say why not? We are in the main a resilient bunch, we move at the drop of a hat, we adapt to foreign situations quickly and we are incredibly resourceful because we have to be – and all those soft skills lead to attributes that are really worthwhile in a business.

And how do you help them?

It’s amazing how much confidence I had lost in my professional abilities after I had children. Add to that frequent moves far away from your established support network and it can be really tough when you’re trying to find work – and it’s easy to find yourself making excuses.

Because we’ve been there, we really understand what military wives are going through so we can offer them a level of support which is crucial to getting back in to the workplace.

How did you go from having an idea to actually starting your business?

I just did it! I had no idea how hard it was going to be, but looking back a bit of naivety was a good thing as I knew this just had to work, I was determined and it had to succeed. Failure to me wasn’t  an option. My dad once said to me that when you get to the end of the rope you tie a knot and hang on!

How have you funded your business?

I had to borrow the first £100 from my business partner, and then I advertised on the angel network where I found our first investor (who was in fact a soldier). Since then I’ve had small grants from various military charities, but it was important for the business that we could stand on our own two feet and be sustainable.

You can save so much money when you are starting a business if you’re careful. We first used virtual offices, then a virtual PA to keep the costs really low. Google docs are also a great business asset.

And how do you fit your work around your family?

I don’t. My husband is away a lot so I try and do the hard graft when he is not here and when the children have gone to bed,  but also I have a very supportive family and some good friends, all of whom support and help as much as they possibly can.

When the children come home from school I try to switch my Recruit for Spouses head off and concentrate on them – after all they are my priority – but it is hard to switch off, particularly if it’s been a difficult day. My son’s first sentence was, “Where’s the iPad?”  So it hasn’t been ideal for them. I think as working mums we are constantly fighting with the ‘shall I, shan’t I’ work argument.

I could easily be at my desk constantly, and while I really do try to switch off and make the most of our weekends, my husband Neil and those who are close to me would probably disagree and say that my phone is permanently attached!

What are some of the biggest challenges you’ve faced?

It’s difficult to say, but there will inevitably be challenges. It’s how you deal with them that matters at the end of the day. You do have a choice about how you react to situations – if you go into business with your eyes wide open with the knowledge that something could possibly go wrong at some point then you are half way there. Just tackle one thing at a time and you will get there.

And what are some of your biggest successes to date?

Winning the Prime Minister’s Big Society award. When I had the call I was in the car with my colleagues, and I initially thought it was my sister playing a joke. But when I realised we had really won I was elated, mainly for the team – in  particular Jo and Susie, but also the wives who have worked so hard on this business in the past and helped Recruit For Spouses along the way.

What’s your vision for Recruit for Spouses?

To change the perception that military wives are too transient to employ. Wives and partners (including men) are being pushed out of the employment space because of their attachment to the military, and they shouldn’t be.

We are even told to be dishonest on our CVs by recruitment agencies, and we shouldn’t have to do that. Instead we should be proud of what our husbands and wives do, as should employers.

What advice do you have for other aspiring business mums?

Firstly, have self-belief. You must believe in yourself but also research as much as you can about your product. Speak to as many people as you can, and don’t cut corners. Do seek out a mentor – there are lots of really good places to go to find them but usually through networking and trust your gut instinct. And finally, turning your dream into a reality is not rocket science, you just have to do it.

You can read more about Recruit for Spouses and search for opportunities on their website.