Read one working mum’s quest to ‘have it all’ 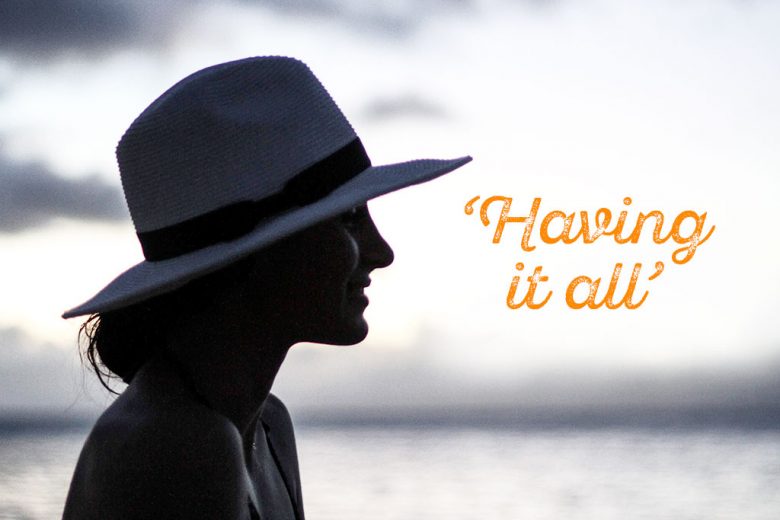 Read how content writer Sarah Richards eventually found out how to ‘have it all’ by working for herself.

The truth is that there is no one-size-fits-all solution. What works for one mother would be a life of hell for another. And indeed, often the perfect answer comes by accident – we stumble across any idea that had never occurred to us while looking for something else.

This is why we love sharing your inspiring stories every Friday. We want to show you that there are a never-ending number of ways that you can shape your life to fit your ambitions and the realities of your personal situation. You CAN find a way to make your life work – and love it.

And today’s personal story from Sarah Richards encapsulates the journey that many of us go through. It shows that sometimes it’s only by being put in a really, really uncomfortable place that we find what we really need, and finally ‘have it all’.

I wanted to be a nun

When I was a child, I wanted to be an air force fighter pilot or a nun. I had asthma and wasn’t religious so neither of those choices were really going to work out.

When choosing what to study for GCSEs, my art teacher told me to never hold a pencil for anything but maths. So obviously, I studied art, then design and later advertising. I entered the advertising world as an art director. Half way through, I switched to copywriting and loved it.

Having design training influenced – and still very much influences – the way I write. When I look at a page I see how it looks, feels and the overall impact of what I am looking at, as well as the words on the page.

I went through copywriting for ad agencies and digital before going into local and then central government.

Initially, I worked for Directgov, a big, orange, citizen-facing website. Directgov was run by the Cabinet Office and all the other government departments contributed content and money. (It was estimated that government maintained over 3,500 websites at that time, plus Directgov.)

I worked on a project called convergence, leading a little team taking 185 sites into one. It was not easy. We had no mandate, poor tech and the departments hated us.

So we worked using personal relationships, cajoling and a lot of running into arguments with the other departments. We tried pushing for all the usual usability considerations, but the departments didn’t have to take any of our recommendations.

If a manager wanted something published, it was

There were a lot of opinions in government at that time and little or no research; if a manager wanted something published, it was. Whether it was any good, any one wanted it or it was vaguely readable was irrelevant.

To give you an example, we had evidence to say users wanted to find a contact telephone number for a government service. When we put that number on the page, we were told to take it down immediately.

The department didn’t want users to find it so easily. We were to make it difficult so that the call centre wasn’t swamped. That’s the sort of environment we were working in. (I’ve blogged in more detail about this time here.)

Directgov was replaced by GOV.UK

After convergence, a team was brought into government to run a new type of digital project. The new government website, the one to replace Directgov was to be entirely user centred. It was to be run by the newly formed, Government Digital Service and the site was (and is) GOV.UK.

Imagine what happened to all those managers with opinions. They nearly imploded.

A lot of government departments were waiting for this and got stuck in. Some kept telling us that we couldn’t do this. Legally, government just had to publish a lot of this information. It didn’t matter if anyone could actually understand it.

GOV.UK was to be different.

I created and led the team that wrote for GOV.UK. We took 75,000 pieces of content and ended up with just over 3,000. We worked in an agile, user-centred way. We had a brand new way of working for the whole of government.

GOV.UK gave the user what they needed

We called it ‘content design’.  The vision for content for the new government website should be that content – anything on the page – should only limited to what the research shows is the best way for the target audience to consume that information.

This could be a tool, calculator, calendar, video etc. Content should mean content, not words. We should work to what users needed to know to complete a task with us, not just publish what government wanted to say.

We changed the way government communicated

We changed the way government communicated. We banned jargon and useless words; kept everything to a user need only and researched everything. (You can read more on this part of the story here.)

Which sounds all rather glossy, doesn’t it?

Working on GOV.UK was hard. We were taking on the whole of government and telling them the way they had been working for years wasn’t going to be the way we were going to continue working.

In one area we said they would have almost no control over anything we wrote. As you can imagine, there were many tantrums and much shouting. But for me, that wasn’t all that was going on. I was leaving a marriage and fighting on that front too.

I was fighting for my children at the time

So here I am running with the most exciting, hardest project I have ever done, and playing legal games so I can get custody of my kids without a fight that I would certainly lose (my ex was the primary carer).

The stress was incredible. I virtually stopped sleeping. Clumps of my hair fell out when I touched it. I could nap standing up. Emotionally, I was all over the place.

Eventually though, my divorce went through fine. I got shared custody and GOV.UK was launched.

You CAN have it all – when you know what ‘all’ is

I read a lot about women – particularly single mothers – having to sacrifice this, that and the other. Yes, you do. But once you decide what ‘it all’ really is for you, you can have the lot.

I decided ‘having it all’ meant being a very present mum. As I can’t work all the time, I can’t earn all the time so we miss out on a lot. But we are having an amazing time. We laugh a lot. And that’s having it all for me.

I now work for myself

I left GOV.UK a few years ago and now I run a small company. We do a couple of things:

Being a consultant and trainer is an amazing experience. I get to talk to amazing people and be a part of great projects. I think you can get to whatever it is you want. Really.

Yes, it takes focus. And yes, I miss out on things. But if I keep my goal firmly in front of me, whatever is coming, will slide to one side if I just keep going.

You can find out more about Sarah Richards and her courses at contentdesign.london. You can book her courses through Eventbrite and get a 25% discount when you enter Freelance at checkout.

Already writing for the web? Check out her content design 2 day course. It’s designed for people who have some experience in writing for the web but would like a complete grounding in producing user-centred, evidence-based content.