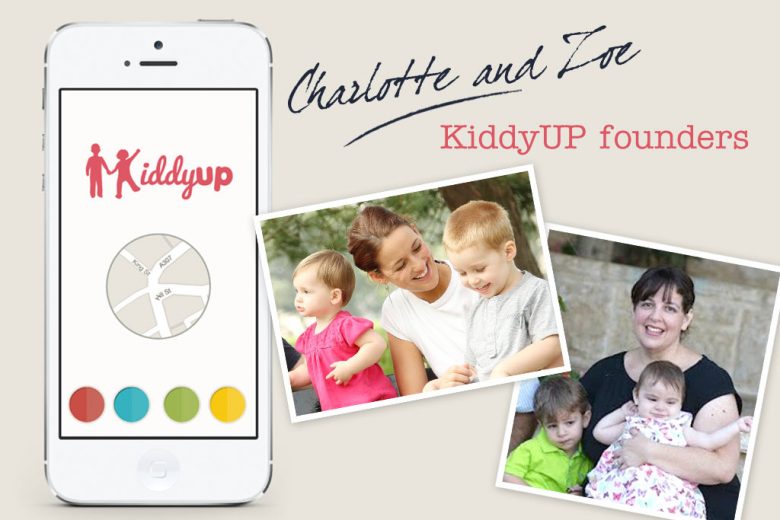 When barrister Charlotte and marketing director Zoe met at an NCT antenatal class, they had no idea that four years later they’d be launching an exciting new app for parents together. Yet next month that’s exactly what they’ll be doing. We found out how KiddyUP got started.

What is KiddyUP, and how does it work?

Charlotte: KiddyUP is a free-to-download smartphone app that pulls together all the useful information a parent can need. Using maps, real-time information and user reviews, KiddyUP puts the information they need directly into the hands of parents on the move.

Zoe: KiddyUP is the fastest way to share the best  and cheapest places to feed, change, play and buy when out-and-about with your family. It has user reviews and a unique incentivising points system – so it’s not just a map, but an interactive social network of ‘Totspots’. And as well as making your life easier when you’re out and about, KiddyUP is supported by a sophisticated marketing system, with exclusive vouchers, deals and discounts.

When will KiddyUP be available?

Charlotte: We’re launching it in the App Store in February 2014.

What gave you the idea for KiddyUP?

Zoe: There are two things we see which KiddyUP can answer. We both had masses of child-related store loyalty cards and vouchers in our purses and thought there has to be a better way. We also spend lots of time online in various parenting forums and Facebook groups. Time and time again the same questions are being asked by parents in these groups, like where to go to find cheap nappies, or recommendations for local, cheap activities suitable for particular ages.

We were already running a business together called Fancytotz, which produces innovative baby products and so were constantly thinking of new ideas and concepts to revolutionise the parenting industry. We thought long and hard about a way to integrate a rewards system into a sat nav platform so that not only could mums and dads quickly and easily locate products and services in their area, but businesses could target the right customers. And so KiddyUP was born!

How did you go from idea to business?

Charlotte: We immediately realised the potential of KiddyUP above-and-beyond the other products we were working on with Fancytotz. We set up a separate company – KiddyUP Ltd – here in the UK, and immediately got to work.

Zoe lives in Israel which is where it is all happening in the tech world.  There, she was able to recruit Alex Zak (our CTO and developer), an iOS specialist and expert in indoor mapping technologies, and Ofir Oron (our App designer), a guru in his field with a string of very successful apps in his portfolio, including mySupermarket, ooVoo and MyHeritage.

Once we had a team in place, we progressed extremely quickly from idea to working prototype, and here we are ready to launch.

How did you both meet?

Charlotte: We met at NCT antenatal classes in Radlett in 2010 where we were both living at the time. Our sons, Ted and Jonah, ended up being born on the same day and by total coincidence our daughters were due on the same day less than two years later! However fate took over and Charlotte’s daughter Nancy was born five days before Abi, Zoe’s daughter.

Zoe: I now live in Israel so we have what you might call a long distance relationship! However, with modern forms of communication we are never out of touch.

What were your careers before going into business?

Charlotte: Zoe was previously Marketing Director for an international airline and prior to that Global Marketing Manager at a hi-tech company in the security field. I’m a barrister, and still practise part-time.

What skills or experience have each of you brought to the business?

Charlotte: Zoe is brilliant at selling our idea. She is driven, ambitious, has remarkable vision and ability to truly understand the target market, which is crucial to our business model. And given her 20 years in the industry, she also has lots of contacts which have proven invaluable so far.

Zoe: As a barrister Charlotte obviously has a legal background which any new business owner will tell you is worth its weight in gold! She was already self-employed so going into business wasn’t such a huge leap for her.

What have been your successes to date?

Zoe:  KiddyUP was recently selected to pitch at the Elevator World Tour in Tel Aviv as part of the International Start Up Festival. We received some fantastic feedback on our ideas and progress so far. We’ve started to get lots of media interest which is just amazing. Charlotte has recently been approached by Forbes to feature in their Entrepreneurs column which is exceptionally exciting.

Charlotte: I think our biggest success has been getting KiddyUP from idea to product so quickly, and the fact that businesses are already contacting us and asking how they can be on our map. It’s been intense, but we hope the pace will continue as we keep developing the app and bringing out new features and updates.

What have been your setbacks, and how have they helped you?

Charlotte: As with any business there have been setbacks ranging from trademark battles with the Intellectual Property Office to overcoming the legal, accounting and administrative hurdles of setting up a business operating globally. We have learnt so much already with lots more to come we imagine!

What is your vision for KiddyUP?

Zoe: We want KiddyUP to be the single go-to platform for the parent market. We want to do away with the endless loyalty programmes out there, and combine all the benefits they offer in one app where they will be able to find everything they need – cheaper, faster and targeted just for them.

Soon parents looking for products, activities and services won’t need to ask where to find them, they will simply ‘KiddyUP it’!!

How do you balance your business with your families?

Charlotte: I am very lucky to have a husband who looks after the children and who agreed to put his career second at all times. I couldn’t do it without him. Having moved from London to Cornwall two years ago, I also have the support of my parents nearby. I work from home at every opportunity and only ever ‘go to work’ when I have to appear in court. I stay up very late! It’s a tricky balance but I think we just about pull it off.

Zoe: I use some fantastic childcare resources over in Israel, where I live. Charlotte and I spend many hours late at night talking and working, trying to catch up on hours we’ve missed while the kids were around during the day.

Who or what inspires you?

Charlotte: Lots of people look at successful individuals with envy and even hatred. I’ve never been like that. I’ve always wanted to ask what they do and how they do it. Although frankly, I draw my inspiration from the thousands of single mums out there who battle very day to look after and provide for their children. I look at them and think wow!! I find it hard enough with all the support I have around me.

Zoe: I have always had ideas, and always said that one day I would do something of my own. It wasn’t until Charlotte inspired me to use my experience and ambition to take the plunge and set up KiddyUP with her.

Charlotte: There is never a good time, really there isn’t. If you have a great idea you just have to go for it. Team up with another ambitious mum like I did. We lean on each other every single day and there have been plenty of occasions where one or the other of us has had doubts or been lacking in confidence. I couldn’t have done it without Zoe and I am pretty sure she would say the same thing about me.

You can find out more about KiddyUP on their Facebook page.