Is The Guardian’s advice practical or prejudiced – what’s YOUR view? 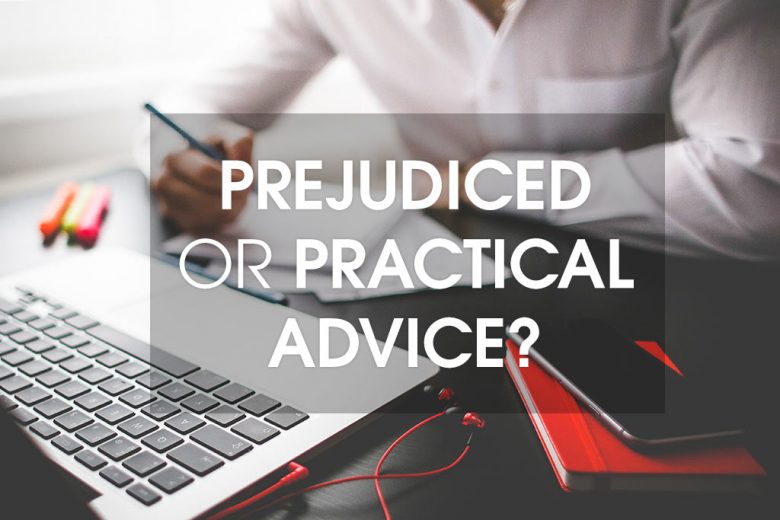 It’s bad enough that some employers today still discriminate against mums. But surely we can expect a fairer reception from the career column in a national newspaper?

Or can we? Last Saturday, The Guardian’s career column Dear Jeremy published their response to a reader’s problem – a mum who felt she’d been asked an inappropriate question in a job interview. This was her question to The Guardian.

I recently had an interview at a well-respected commercial organisation. I have ample relevant experience for the position and felt that the interview was going well during the section where I was asked technical questions, gave a presentation and had to answer questions related to my field of work.

I was interviewed by two men (I am female). I was asked by one of them how I would cope with the work bearing in mind I have two children – I had disclosed this in my application form only to explain a short gap in my career.

I was stunned to be asked this in 2015, and while I wanted to challenge them by asking whether they were putting the same question to male candidates I answered along the lines of “Fine, obviously, or I would not have applied for this position as I am not stupid and have worked since my children were small”.

The interview continued and it was made clear that successful candidates would be chosen largely on whether they would “fit in” with the organisation and other staff. I have yet to hear whether or not I have been successful.

Leaving aside the issue of whether I want to work for an organisation that asks such questions in interviews, I am not sure whether and how to raise the issue with the company.

If I am unsuccessful I do not want to appear that I am acting out of “sour grapes”, but I feel very angry that I was asked such a question when I suspect male candidates would not have been. I feel that future female candidates should not be put in such a position and this large organisation should know better than to interview in such a way.

How do I, and should I, raise this issue with the organisation in question?

This was Dear Jeremy’s reply to the reader’s problem.

I have every sympathy for your feelings and understand your reaction, but I’m afraid I am not going to agree with the intensity of your response. You may think that this is because I, too, am a man, and you may be right. But I hope you’ll at least give some open-minded thought to my reply.

At a cool, factual level, it is indisputably the case that when women are carrying the majority duties of bringing up young children they need to be more inventive than their male partners in programming their various work and home responsibilities.

And when a child’s illness or demands from school intervene, it is often the mother rather than the father who chooses (or is chosen) to do the necessary juggling – which may well have a brief impact on her timekeeping. Most are skilled at covering or working late, and take pride in ensuring that the impact on work is minimal. This allocation of responsibilities between parents may be unfair and may well be unnecessary – but it’s certainly not uncommon.

The male interviewer who asked you how you would cope bearing in mind that you had two children was certainly guilty of clumsiness and insensitivity – but to his not very empathetic mind, he was simply acknowledging an understood reality and wanting to know how you managed it.

In that respect I honestly don’t see that there was anything inherently offensive about his question. I think your immediate reaction was a bit extreme, and I fear this reaction may have disproportionately coloured your view of the entire company.

Whether or not you’re offered this job – and let’s hope you are – I suggest you write a measured letter to your main contact there. Explain the reasons for your writing though more temperately than in your letter to me. Simply and helpfully suggest that such a question, however tactfully phrased, could well deter excellent female candidates from wanting to join. Even if you don’t get the job, that won’t sound like sour grapes.

Why The Guardian is wrong

Not everyone was happy with Dear Jeremy’s reply. Ruth Cornish is an independent HR expert, and used to frequently reply to Dear Jeremy problems as ExBrightonBelle. Today she provides HR advice for Moneywise, the UK’s best-selling personal finance magazine.

Ruth was so shocked at The Guardian’s reply that she decided to publish her own, less ‘sexist’ reply in her blog this week.

I’m sorry to hear about this and can well understand your anger. Sexism like this that is sadly experienced everyday in the workplace reinforcing the past when men were in charge and women could at best do small unskilled part-time jobs.

I had my first child when I was 19. I didn’t go to university as a result and instead began working for American Express who even then (1988) had a Non Graduate Development programme as well as one for Graduates. This meant my career progressed rapidly and I relocated to the City doing a number of senior HR roles.

I never told my employers in investment banking that I was a mother as I knew they wouldn’t have hired me and even if they had, they would have treated me differently and expected less. So I’ve been a working mother for my entire career.

Jeremy Bullmore will never have experienced sexism like this. Ever. Though he almost certainly will have been part of it. Sexism that means whatever you do, how ever hard you work, you are still just a single mother. Or a woman. It is a very distressing experience and makes women very angry. And some men I am pleased to say (view twitter today).

Now I have my own business where it is my husband who works part-time as he is the main carer to our two young children. All our employees have children and work flexibly and I actually prefer it as they give me 110%.

But there are still men in the corporate workplace that think that if women have children they are worth less, can do less, should be paid less but luckily we work in the UK and it is 2015. Such attitudes are against the law. The Equality Act to be precise. The clue being in the title.

You say the organisation you wanted to work for was large and commercial. Well I’d say they weren’t commercial on two counts.

Firstly to remain commercial they need to hire talented driven people. That has to include female as well as male employees.

Clearly, they treat women differently from men and the fact they were so happy to share their attitudes with you, during an interview, with no fear of recourse gave you a much needed flavor of the environment you nearly worked in. A bit like an attractive man making a small racist comment on a first date. It’s called ‘unconscious bias’ and that organisation will probably have a big problem with it.

Secondly, it’s a bit of a waste of money to risk having to pay financial compensation to people like you who will have an excellent case, whether they offer you the job or not, for discrimination on the grounds of your sex.

There is no way they have asked men the same questions and are therefore treating you less favourably in the interview process. The comments about hiring you if they felt you fitting in sounded very much like the old “does your face fit culture” (well it probably won’t if you are female and have children).

All of that said I do think a letter, carefully worded, unemotional, cool and factual, to the CEO is in order. He (I’m taking a wild guess here) needs to know that he has a problem. He may want to do an independent investigation and possible actions may include all his managers being training on how to conduct a proper interview. It may be they don’t know what is or isn’t acceptable but the HR team should be aware and managing and monitoring the situation. It’s just not competitive to turn off talent in this way and I would hope he would understand that.

Whether you go a step further and make a claim to an Employment Tribunal is up to you. I think any action should be about trying to influence and change behavior. It would be public, so terrible PR for them but you need to find a job. So think it over and take advice. They would probably offer to settle the claim. I certainly would if I was their HR Director.

You sound very articulate and highly employable but not someone to thrive in a stifling male dominated environment. Find an employer that is more progressive and be glad you had this experience to help you avoid working for a company you may have been pretty unhappy in.

What’s your opinion? Was Dear Jeremy right, perhaps just being practical, in his response? Or was he merely compounding the prejudices women, and particularly mums, face in the workplace every day? And if so, is this an appropriate response from a newspaper such as The Guardian?

We’d love to know what you think, or even hear of your own experiences. Have you been asked similar questions by an employer or in an interview? Please tell us in comments.