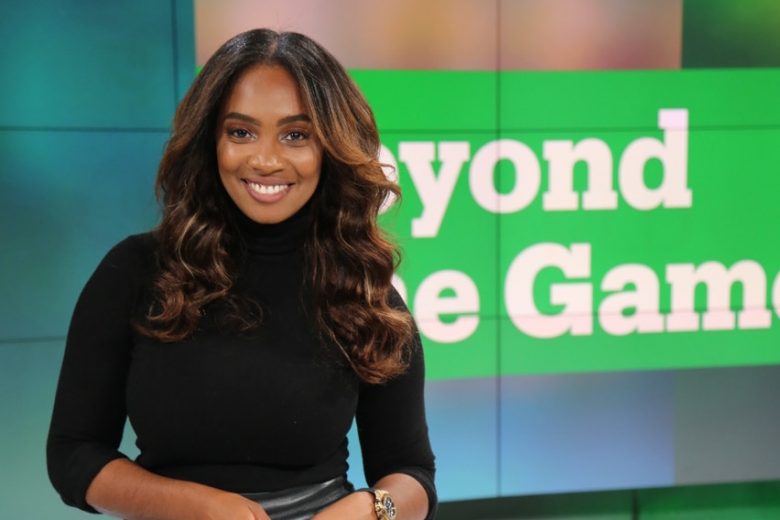 Samantha is an inspiring female sports presenter, from Birmingham, who’s moved out to Turkey and is currently working as an anchor and correspondent on the sports show ‘Beyond the Game’ for TRT World  (an international English-language news organisation based in Istanbul).

She is a journalist and mentor and is passionate about a range of sports and has interviewed Olympians, Paralympians, Basketball legends, Formula One and Rally drivers, Boxers, Footballers, Rugby and NFL players.

Samantha was named in the 2016 Football Black List – a list that recognises and celebrates influential figures in football – and featured in the 2014 PowerList ‘Top 20 list of Britain’s Most Influential people Under 40ʹ for her achievements in the media.

I’ve been in the media industry since I was 16. It has always been a dream of mine to work in the sports industry, but I found it incredibly cliquey at first and hard to get my foot in the door.

So I initially got into media via the music industry. The crossover from music to sport came when I was working as a print journalist for Touch magazine, interviewing musicians and athletes; I also got to liaise with brands such as Nike, Puma, and Adidas.

I interviewed a footballer for an issue and his agent told me to get into touch with the Executive Editor of Sky Sports News.

Where do the ideas for some of your own projects/recent interviews come from?

I actually get the best ideas when I’m in the shower. I think it’s because my mind wonders! But I might come across a certain topic or issue in the press or the radio then I delve into it a bit deeper.

How did your move to Istanbul come about and starting work at TRT World?

A former colleague recommended me to the sports EP at TRT World. I had a Skype interview a month later…. Then three months later I was moving to Istanbul! Looking back it’s all a bit of blur.

What is your unique selling point as such?

I take my work as a journalist equally as seriously as the work I do as a mentor and causes that I’m passionate about. I’ve worked with ‘Kick It Out’ – football’s equality and inclusion organisation and continue to work to challenge discrimination, encourage inclusive practices and campaign for positive change.

I’ve volunteered and chaired events at the House of Commons, as well as Wembley Stadium, the Emirates and the Ethiad stadium; and offered advice to help people flourish in a supportive community, where fairness is paramount and promoted the benefits of equality and diversity in football.

I’ve made it a priority to support individuals in helping them achieve equality and fair outcomes.

Who is your target audience in what you do?

I could say sports fans, but it’s not that simple. The show I work on, BEYOND THE GAME, showcases feature pieces about sports people and teams with fascinating stories, and debate.

For example, I recently went to Paris and one of the stories I covered was on Rizlen Zouak, a female Jukoda, who’s switched to Mixed Martial Arts. She explained to me what it was like to be a woman fighting the stereotype and what it means to be a French Muslim woman in an increasingly right wing society.

I was in awe of her watching her train, she’s such a winner and she exudes confidence.

The biggest obstacle I’ve had to overcome was myself. I had to learn to get out of my own way to succeed. I still can’t believe how much pressure I put myself under, how many times I second guessed myself and how I spoke to myself if I failed at something. I really had to take a step back and re-evaluate how I viewed myself, my work, and my life.

Every negative thought I had about myself, was actually a positive and made me unique. It took a while for me to realise that.

What is your proudest moment so far?

The most popular work I’ve done was an interview with Claudio Ranieri. It went viral and got picked up worldwide! However in some ways I feel most proud when I can stir up a discussion. I’ve anchored some great shows with great guests and topics. Interviewing the president of Besiktas Football Club (Turkish champions) was a big deal for me, despite only being in the country for less than two years and not mastering the Turkish language, the club trusted me enough to invite me into their circle.

As tiring as it may be, I’m proud of physically going through the whole process from pitching a story, to conducting it, to editing the piece. When you see it go to air you feel a sense of pride that you’ve told that story and it’s had a great reception.

More importantly I feel proud of myself for getting to this point in my career. I’m a product of a working class single parent family, and a black female working in a white male dominated industry. I’d say I’m doing pretty well.

It’s not really work if you’re enjoying it right?

Growing up, I was surrounded by very strong, independent women who were a great source of inspiration to me. My Grandfather had a tremendous work ethic so I like to think I got that from him.

Closer to home, it’d have to be my international network of badass girlfriends who are all successful and doing brilliant things, and really push me to do and be better. A couple of them are juggling a career, motherhood and marriage, so my respect for them goes tenfold I just have to worry about me and my cat!

I’m lucky to work in a newsroom with dynamic females, who also inspire me on a daily basis.

How do you balance your career with your life outside of work?

Good question. I feel that I’ve only just found a balance since moving to Istanbul. But I do feel lucky that I’m geographically blessed right now, which means it only takes an hour to get to a beach or to the mountains for skiing at the weekend.

Be persistent, be passionate and be prepared.

Published on Nov 17th, 2017 by Hannah Martin
We use cookies on our website to give you the most relevant experience by remembering your preferences and repeat visits. By clicking “Accept”, you consent to the use of ALL the cookies. However you may visit Cookie Settings to provide a controlled consent.
Cookie settingsACCEPT
Manage consent