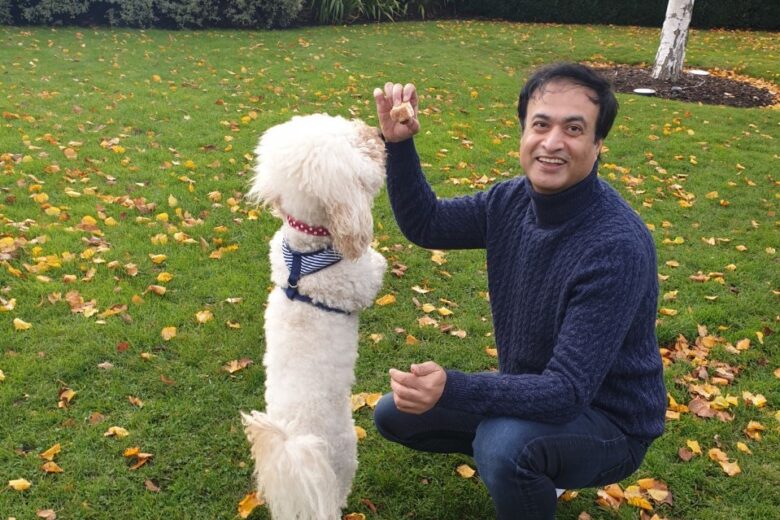 11% more households have introduced a dog during Lockdown. And, apparently, 73% of ‘pet parents’ scrutinise their dog’s food recipe deck diligently. Find out why Prash Patwardhan was inspired to launch Pawfect, a new breed of healthy dog treats.

Pawfect is one of a new breed of ‘optimal health’ dog treats (foods to follow) that are breaking up the uncomfortable stranglehold that large swathes of small, ‘backstreet shed’ providers (and the odd lost-in-time corporate) continue to exercise over modern-day dog treats providers.

As a global marketing director, I’ve spent the last twenty or so years working across a variety of roles, from software and healthcare recruitment to global brewing.

I enjoyed my time in ‘corporate world,’ but like many before me became increasingly frustrated by the tentative, slow (and often reactive) manner in which most vast businesses operate.

I’ve always harboured an entrepreneurial streak and have long craved the opportunity to pitch a smaller, nimble business against vast ponderous corporates.

I’m a big fan of dogs and noticed some time back that this seemingly ‘recession-proof’ sector was finally going through a long overdue ‘redemption curve’ (superior taste and nutrition, sustainable, superior ingredients…) which sparked within me the thought of stepping out and making a real difference.

Where did the idea of Pawfect come from?

At the heart of Pawfect is the uncompromising belief that good health and great taste aren’t incompatible goals, which is why Pawfect rejects traditional dog ‘snacking stereotypes,’ which suggest a treat must either be health-conscious yet uninspired or indulgent yet fundamentally bad for you.

It’s believed that natural petcare products will be a £324m industry by 2022, a promising bottom-line number inspired by 3 unavoidable truths.

The spectre of Lockdown resulted in ‘pet parents’ appreciating their dogs more than ever. Health-conscious humans who’d finally got their own healthier eating agenda in order, now found themselves looking despairingly at the ingredient decks of their dog’s favourite goodies.

The other pivotal factor in Pawfect’s creation the growing global realisation that dogs aren’t single-track carnivores.  Clearly dogs will always need meat-centric diets, however an overtly meaty diet (lacking fruit, herbs, veg and even dairy) can lead to spiralling veterinary bills and a swathe of illnesses (liver, kidney & pancreas issues).

Health-conscious humans who expect their dogs to enjoy the same ‘healthier living’ benefits they do from making consistently tasty yet nutritionally sound (well-balanced) meal decisions.

Does the data back you up?

It most certainly does – Here are a few starters for 10 (from Mintel Oct 20).

68% of dog owners perceive their dog to be an integral member of the family whilst 42% go so far as to believe that their dog is a discriminating foodie.

43% of UK dog owners are also adamant that it’s important to limit the amount of red meat consumed by their dogs. Whilst 71% of pet parents are adamant that a dog’s diet has a direct impact on his/her emotional well-being.

Most promising of all today 76% of dog owners reject products tainted with synthetic nasties although its worth being aware that nation’s no.1 chew stick includes ingredients like potassium sorbate, sodium tripolyphospate and poultry flavour, phrases and names which pretty much tell you all you need to know about how much further we pet parents still need to travel.

How did you transition from idea to actual business?

We’ve certainly made a few mistakes along the way (expanding the range too quickly, taking time to build an online shop presence) but if we hadn’t made any mistakes we probably wouldn’t have been trying hard enough.

That said the successes outweigh the failures, and if I was going to hang my hat on five key successes, they would be:

Supermarkets/online are only now realising the full potential of truly differentiating/expanding their petcare fixture, which was a historically a low maintenance category that made good money with minimum effort.  The rise of the food minorities movement and health-conscious ‘pet parents’ has changed all that!

Most of the big pet food players as we know are owned by vast corporates (Nestle, Mars….) who are reluctant to either evolve (hence acquisition of Lily’s….) or relax their grip. It takes buyers with real foresight and determination to evolve a category to take a chance with ambitious ‘disruptors’ like us.

And finally, what inspires you?

I’m proud to be an all-natural pet food evangelist because I’m such a fan of dogs. Their unrivalled ability to convey love, their willingness to be part of your life without complicated negotiations, the fact that they only look to your good stuff (never dwell on you failings), their appreciation of simple pleasures (walks, tennis balls and a hug) and their capacity to eradicate loneliness.

Find out more about Pawfect.