Interview with Paul Rostland, founder of Artful Bakers and the Great British Biscotti 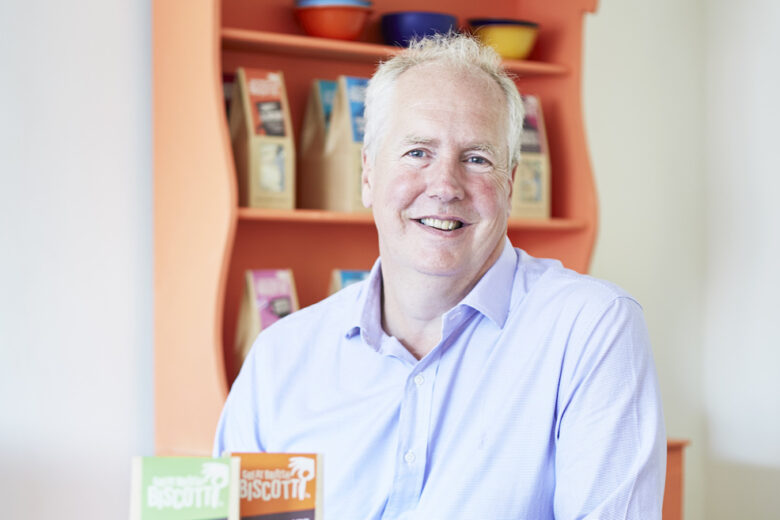 Find out how Paul Rostland was inspired to launch Artful Bakers and the Great British Biscotti.

It’s fair to say that I’ve always worked in and around food. In a former life, my career revolved around sourcing intriguing food concepts for supermarket’s highly profitable ‘white label’ ranges.

Past foodie adventures involved setting up all manner of ambitious foodie start-ups around the world; be that a vegetable farm in Andalucía, three specialist bakeries in India tasked with baking best-in-class bhajis, samosas and pakoras OR two artisanal Italian-based providers of first-class gelato and pizza bases. This was probably the moment when I first subliminally turned my thought to gourmet biscotti although I didn’t know it yet!

Over time my role slowly morphed into that of foodie consultant and trouble-shooter for on-the-rocks start-ups. It was during one such gastronomic adventure, helping a former work colleague bring about a long overdue biscotti renaissance that I realized I’d stumbled upon a project that truly ‘rocked my boat.’

It was abundantly clear that my ambitions out-stripped those of my colleague who really wasn’t looking beyond creating a ‘local hero’ range, so I took a couple of deep breaths, purchased the business and fired up my Kenwood Mixer.

The Great British Biscotti was born at about the same time UK’s Frothy Coffee movement was in full flow. It dawned on me that Britain’s historical biscuit inhibitions meant that superior quality coffee was being paired with rather dreary support-cast biscuits (think shortbread, Bourbon or any other hackneyed British biscuit).

Then there was the small matter relating to why the timeless biscotti had never evolved beyond almond and why hadn’t anyone ever tackled the age-old conundrum of rock-hard biscotti with the texture of granite. An opportunity certainly seemed to exist to resurrect the timeless biscotti that had originally been created as hearty energy food for invading Roman legionnaires.

I spied an opportunity to tap into our nation’s unrivalled appreciation of the humble biscuit by crafting top tier biscotti with a twist; thrilling, occasionally improbable flavour marriages, intriguing textures and best-in-class ingredients.

The first few months were a whirlwind of flour, butter, Belgian chocolate, moreish fruit and decadent nuts even though the original business started out as little more than two table top ovens, a hard-working Kenwood Chef mixer and a lot of inquisitive thoughts.

This was the moment I wondered why biscotti had never taken a turn towards savoury. In no time ingredients like fennel, cheddar, jalapenos, chorizo, olives and sun-dried tomatoes were being added to the bowl, which is when the business really started to enjoy significant growing pains.

Finally cheeseboards, meat platters, soups and salads had a new hero because bland seedy crackers were no longer the only fine food accompaniments in town.

What obstacles have you had to overcome?

Cashflow is too obvious so let’s go with preventing your ‘brain cogs’ from overheating. When you start a business there’s little choice but to dedicate your life to it. It’s 18 hours a day, seven days a week. It’s waking up at three in the morning, wondering whether your latest order will be baked in time and will your limited funds stretch to another month before the next round of investment comes in.

Then there are concerns about whether your current premises are big enough (we’re on our third) whether you have all the right kit, does your packaging pop. The problem is that ‘fun stress’ can quickly evolve into ‘deep stress’ which can put your personal health at risk. You certainly need a resolute life partner, an understanding family and friends who aren’t afraid to tell you that you’re boring them with all your biscuity obsessions.

And what have been your successes to date?

While there have certainly been setbacks (too many to mention) even we have been surprised how much scope there is for a superior biscotti. What began as an idea for independent deli and coffee scene (supermarkets at a stretch) has rapidly transformed into something so much bigger than I could ever have imagined.

Today my team and I export across Europe (yes even Italy) and North America and have most recently dispatched containers to Norway and Canada. There’s even significant interest brewing in UAE, Saudi Arabia, Qatar, Iraq and Iran, thanks in no small part to the fantastic support of the Department of International Trade (South West division).

Naturally my hotel, hospitality and food service business has ground to halt during the pandemic, however hamper (corporate and individual) and gifting enterprises have more than taken up the slack as ‘trapped at home’ families root around for small, indulgent treats that put a smile back on their faces.

Then there have been game-changing collaborations with big name retailers like Hotel Chocolat! More recently the team extended its reach into gluten-free and vegan variants whilst changing all their packaging into recyclable/planet-friendly formats. My fellow fine baking emissaries and I also continue to stand their ground against the plethora of lazy, lost-in-time business who still use planet-inappropriate, palm oil.

In 2020 Great British Biscotti was placed under an Artful Baker umbrella, enabling this fleet-footed specialist bakery to ultimately extend its reach beyond biscotti.

Most excitingly of all in February 2021 Artful Baker secured significant financial backing from the UK’s largest bakery brand, Warburtons. The 145-year-old company, now in its fifth generation of family ownership, is providing a six-figure funding package, having teamed up with Mission Ventures to support innovative start-ups and SMEs in the bakery category.

My team and I have started to share our bakery expertise and production capacity with a small number of kindred-spirit snacking and bakery start-ups, because we want to help others avoid the many pitfalls they’ve encountered.

Regarding Artful Baker’s next product innovation it’s far too early to say, albeit whatever it is, it will be unashamedly indulgent and artisanal!