Interview with Julie-Anne Uggla from Zamcog and Cities Talking 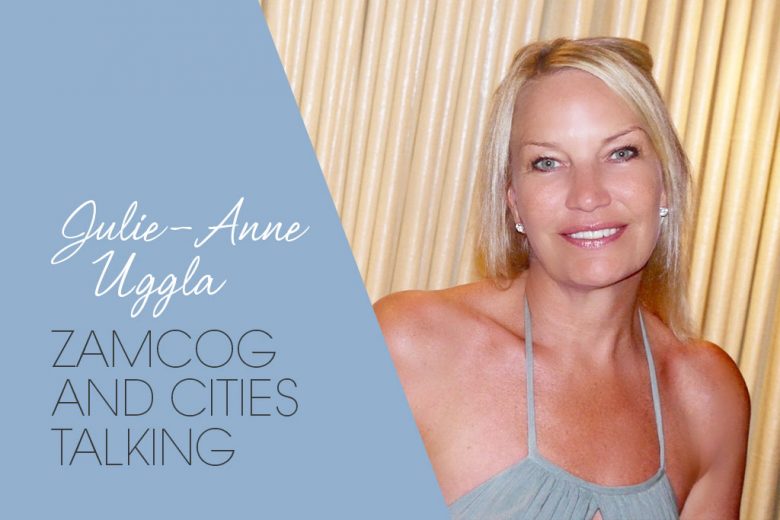 Julie-Anne Uggla was born in Zimbabwe and raised by a single mum in Canada. Today she’s a successful businesswoman and investor, and is driven to improve the lives of children in Africa through her charities. Here’s her amazing story.

I was born in Zimbabwe, moving to Canada before my parents divorced. As an only child, growing up in a small apartment with a single mum, I learnt early on the importance of having to work hard for what you want.

I dropped out of school just before graduating in a bid to earn and after a short-lived stint as a model, aged 19, I was encouraged to travel, hitch-hiking through Europe.

When I returned to Toronto, I found work for a headhunting company. At 24, I then went on to set up and run a successful firm. Between 1992 and 1998, I had four children – and they kept my ex-husband (who founded a very successful business) and I incredibly busy!

Around this time, I started to become actively involved in the non-profit industry, and set up my first fundraiser in the Ukraine in 1992, which funded 16 different orphanages.

More recently, I set up city guide app business Cities Talking and in 2003, I set up Zamcog. So far, we’ve raised more than £5m, helping to school thousands of disadvantaged, orphaned and highly vulnerable children in Zambia (which neighbours my native Zimbabwe).

As well as funding a school, we house 90 orphans. We serve more than 70,000 meals to children every term – some days, this meal is all the 432 enrolled children will eat. 99.5% of the children from the catchment area are below the poverty line.

When did you start your first business?

I was 24 and it was in the headhunting space. It was an area I’d only worked in for a couple of years, but it was very much a case of knowing I could do a great job myself.

Why did you decide to become an entrepreneur?

I think my mum always gave me such a lot of encouragement, both verbally and just in watching her provide for me. Entrepreneurship is about freedom – the freedom not only to do what you want but also to free you up to enjoy all aspects of life.

Seeing my mum work two jobs just to provide enough money for us both was incredibly inspiring, and showed me that I could create the life I wanted to live.

Why is charity work so important to you?

It’s almost a cliché now, but I didn’t have a lot growing up. As soon as I was in a position to support people in similar or worse situations, I felt compelled to.

Once you’re exposed to the realities of other peoples’ lives, you really only have a few options. You can feel sorry for them, ignore them or do something to support them. I choose to do the latter. Life isn’t about having the most money in the bank to me, it’s about what you can put back in.

You’re also an investor. What do you look for in companies you invest in?

That’s true. In the last decade or so, I’ve become something of a serial investor, in the likes of city discovery app Dojo, social network Wistla and Dagon (a Pizza Hut franchisee across Zambia, Mozambique and Zimbabwe, which has employed a number of students supported by Zamcog).

Every penny of profit made from investments goes into Zamcog and other charities – I don’t take any of it for myself, so given the money is going to a great place, I’m even pickier about the companies I invest in.

There are many elements that come into play, but if I had to say just two, it’d be that there is a gap in the market for the company, and that the founders must be totalled involved. They can’t be your serial entrepreneur; juggling many different businesses. I’ll commit as much as I can to them, and I want full commitment from them.

How do you balance your work with your four children?

With difficulty! They’re older now so it’s becoming slightly easier, but it was very much a case of getting up early to work, doing everything you’d expect a mom to do – homework, classes, driving them around, just generally being there for them, finding time to work during the day and then, when all’s said and done at the end of the day, I’d go back to working. It often felt like I was working two or more jobs every day.

What has driven you to make such a success of your life?

It’s similar to my answer beforehand – watching my mum struggle to provide by working two jobs was the biggest source of inspiration possible. She could have given up, but I never went without.

It certainly wasn’t luxurious, but knowing that she saw to it that if my peers were going on a school trip I could too, it’s impossible not to be moved by that. I really couldn’t have raised my kids without my mom and my step dad, either. She’s my hero.

What’s been your biggest obstacle, and how did you overcome it?

The biggest obstacle and learning point for me has been in trying to take shortcuts because of a lack of funding. Creating a half-way decent product or service is painful, knowing that you’ve created something that is not as good as you could have.

Now, whenever I do anything (whether for myself or when I’m investing) I want to ensure that the necessary funding is there to take it across the line.

And what are you most proud of?

I would have to say Zamcog. We’ve changed the lives of so many children through it, and in an empowering way, I’d argue. There are no handouts, our kids work incredibly hard, we’re just evening out the field by giving them the opportunity to an education so many take for granted.

You’ve achieved so much in life already. What’s your next ambition?

I’m not done with Zamcog and Cities Talking by a long stretch, but I do have something new in the pipeline – a film foundation. The idea is to grant free video production to charities that would otherwise be unable to afford access to a professional team capable of creating content that really shines a spotlight on what they do.

I have high hopes to use the foundation as a vehicle and tool to create and expose change, highlighting issues in the world that would otherwise go unnoticed. We live in times where a powerful message travels fast, and I want to do my bit to help that happen.

What three qualities do you believe have helped you to be so successful?

Ooooh, tough one. I’d have to say I’m motivated, excitable and driven!

Find out more about Zamcog and Cities Talking.