Interview with Hilary Steel, author of World of Potatoes 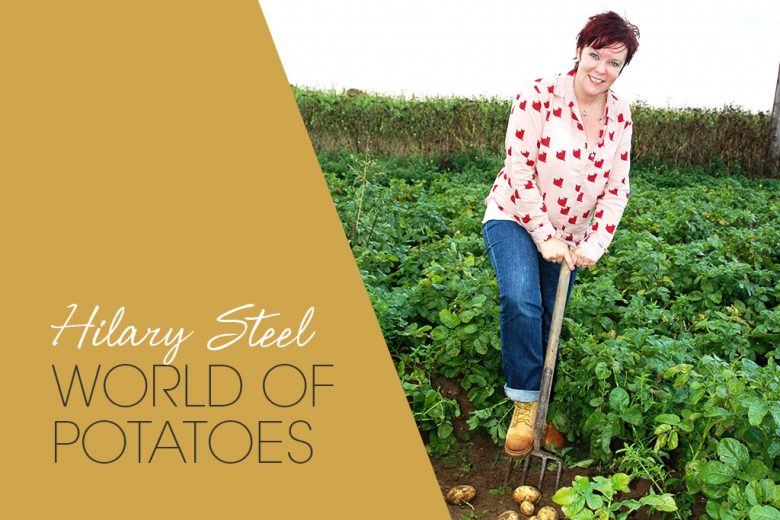 Find out how her mum’s stroke inspired Kent-based Hilary Steel to revive her passion for potatoes with a new cookbook, World of Potatoes.

What did you do before starting World of Potatoes?

Was there anything before potatoes? I studied languages at university and went on to work in global banking.

I learned a lot during my time working for companies such as Bank of America and Goldman Sachs but there was always a ‘niggle’ in my brain that I wanted to work for myself. I set up the Kent Women in Business Magazine with my business partner Sue Smith, and we went on to create three prestigious business award ceremonies in Kent.

What inspired the new project?

In 1989 my mum published The Great Potato Cookbook, which was printed in numerous languages. I remember being really proud of her, not having a clue that 27 years later it would become such a huge part of my own world.

In 2011, Mum (Jennifer) suffered a massive stroke and is now paralysed down one side. She lives with me and just as she did when I was a child, I cook fresh food for her pretty much every night. A chance conversation with someone who saw the original book led to me registering worldofpotatoes.com and the rest is becoming a whirlwind of potato excitement.

What does your mum think of the prospect of her book being revived?

She thinks I am slightly bonkers, but I blame the parents. She is amazed at what has been happening over the past year and each time she sees me in a new potato themed costume, she just laughs. She’s very poorly at the moment and I think it lifts her to know that her legacy is being continued.

Why do you feel so strongly about the potato?

When I started researching the potato I was amazed at just how misunderstood it is. Not only is it one of the most versatile vegetables, but it also isn’t fattening! It’s only what you put with it that piles the calories on.

I’m not a fan of processed food and I wanted to see if we could avoid these foods in my family by becoming creative with recipes and planning ahead for meals. For me, mealtimes are about the family getting together and food is to be enjoyed away from modern day distractions. Dishes can be prepared in advance then frozen, reducing the time spent in the kitchen if you think ahead.

How has your working and personal life changed since launching this?

We never seem to eat the same meal twice at the moment, as each meal I cook is then photographed before eating. Some will make it into the book and others will be put down to experience.

Before launching the Kickstarter for the project I reduced my own work commitments by about 50% so that I would be able to give the project the focus it needs. The funny thing is, I have two bookings to provide potato-based canapés that came out of the blue. Of course I accepted and will use the creations in the book!

What are the main challenges that you’ve encountered, or will encounter?

I think one of the biggest challenges so far has been getting people to understand how Kickstarter works. It’s crowdfunding in exchange for rewards, so it’s also a way that people can pre-order the book.

However, if the target isn’t reached by 22 July, it will be back to the kitchen sink for me to find another way to make it happen. Another challenge is fighting off all the people who want to try the recipes I create! Form an orderly queue!

How has the response been to your campaign so far?

Very positive. The pledges are creeping up and there are a lot of promised pledges that will hopefully soon add to that total. There is a lot of humour in this project and I think that comes through in the story on the funding page.

One lady, Alyce in the US, who is founder of something called #BeingNiceMatters, pledged a very generous amount after we met and started chatting through social media.

The likes to the Facebook page have also increased and by doing Facebook Live videos, it means the community gets a ‘behind the scenes’ look at the good, the bad and the downright tasty side to the project!

Once the book is published, what are your plans to build the business?

This is hot off the press… Once the book has gone to print we will begin to produce potato vodka (Steelie Vodka) using local potatoes. It will be a premium product that will put a whole new perspective on the potato parties I will hold in the future. My mum doesn’t drink, but I am sure she will have a little tipple of this stuff!

And finally, what are your top three Kickstarter tips?

You can pledge to ‘Project Potato’ here and find out more at World of Potatoes.