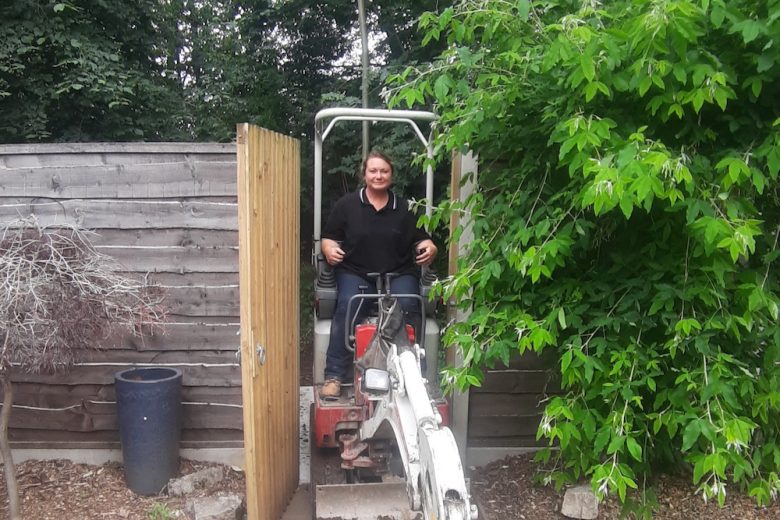 We still have a long way to go to achieve full equality for women – particularly in the building industry.

Pamela Evans shares her story of becoming the first qualified female excavator operator in the North West of England. Find out how she was discouraged from the building industry at school, and how she was plunged into depression after becoming a mum, helping her husband with a new disability and relying on food banks.

Read how Pamela and her husband came through this to start their own business – and their dreams of building a fleet of female operators.

In September 2001 I turned 21 when I was able to take my CITB Excavator Operator Licence test. I passed first time qualifying me to operate 360° Tracked Excavators up to 60 tonnes. I was the first woman in the North West of England and the youngest person in England to get the operations licence.

Going back to my childhood I was born on 12 September 1980. My mum was a caterer and seamstress and my dad an excavator operator. Dad used to take me to work with him from me being six and by the age of 12 I was able to fully operate the excavator.

Through high school I was told there simply wasn’t any way for me to pursue a career in excavation. Instead I was pointed in the direction of doing work experience in a care home for the elderly.

I did what I was advised and enjoyed working in the care home, but I knew in my heart it wasn’t what I wanted to do as I felt I had the skills and passion pulling me towards excavation.

I finished education in 2006 with low GCSE grades, then wandered into various jobs from factories to bar work while working on excavators for my dad on my weekends or any spare time off I had.

It seemed forever waiting until I turned 21 to be able to get my operational licence but as soon as I did I worked for a building contractor on excavators varying from 1-45 tonne for almost 10 years.

In 2010 I left for Australia with my now husband Gary and spent a year working for a building contractor on various excavators as this had been one of my ambitions which I am so proud I have achieved as it took me out of my comfort zone initially, but I enjoyed every minute of it.

When we came back to England late 2011 I worked for a sports ground company gaining experience with tilt buckets on various sized excavators.

After having a baby we needed to rely on food banks

In early 2012 I became pregnant, so I had to come off excavators as standard practice. Then my husband Gary was diagnosed with Diabetic Retineopathy, this left him having to have four major operations on both eyes to try to save his sight, causing stages of full sight loss.

During Gary’s recovery and my pregnancy, I was unable to work as I needed to be his full-time carer.

At the time of our daughter’s birth, which was unfortunately extremely traumatic for both her and myself, Gary became partially sighted and needed a lot of support. I also developed postnatal depression, depression and anxiety, which caused me to lose all my confidence and need support myself.

We also had no wage coming in and, because we had previously been abroad for a year, our financial situation was surviving one day to the next. At times we had to rely on food banks, which is something I never dreamed would happen to us.

After a few rocky years with the right medication and support from friends and family my confidence returned, and Gary found a way to live a new ‘normal’ life with his disability, feeling less dependent on me.

After a rocky few years we now own our own business

With my dad’s encouragement I went back to operating machines at weekends. Roll forward three years and we now own a small excavation company which I started in January 2017 called Evans Excavation LTD, Operator and Excavator for Hire.

This is myself and a micro excavator doing various aspects of groundwork locally, while Gary does the admin side of the business, in between being a stay at home dad.

I love my job and am passionate about what I do and how far I have come, yet I am in a minority and still come up against productise in the building trade. Going into 2019 this should not be acceptable, but sadly it is.

I know if it wasn’t for my dad who encouraged me from such a young age, showing me the skills, I needed to learn and invaluable lessons working on large sites that I wouldn’t be in this industry for which I count myself very lucky.

My dream is to encourage and show other woman that what has been seen as a ‘man’s job’ in the past is well within their reach and achievable with hard work. I would love to be in a position to employ them, train them and show that we can earn a decent wage for doing a decent job as excavation operators.

My vision is to have a fleet of female excavation operators, and a training school available to woman to learn this skill. I have worked on many building sites around the North West of England and western Australia for over 17 years, and I have never met another female operator. I put this down to lack of opportunities and some prejudices.

I have the drive to make this happen, to make it more accessible for women to obtain this skill and have a career in this much needed trade, like myself and discard outdated stereotypes.

As a mother of a young girl I also feel a responsibility to encourage and employ the industry’s next generation of skilled female workers, not only the value they will bring but also a more balanced work force. Recent statistics show around 89% of worker’s in the building industry are male. This needs to change, and I want to be part of making this happen.

You can find Pamela (aka The Digger Lady) on Facebook.