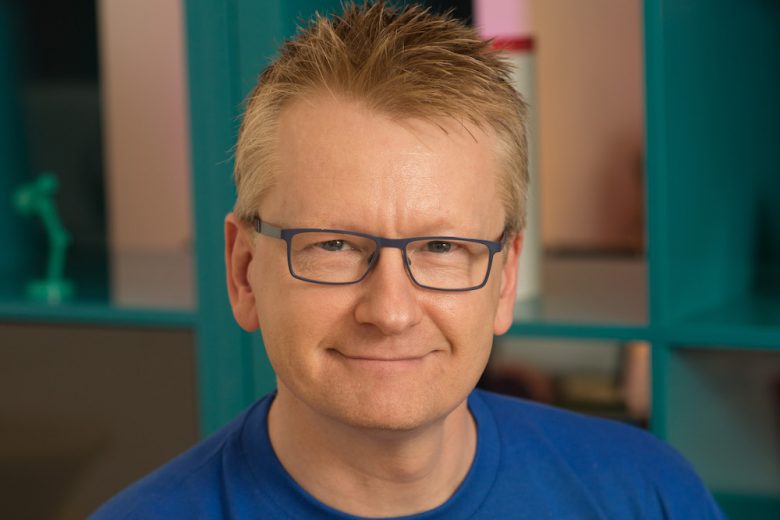 Coworking spaces are very much in fashion right now. But how do you launch one? And what makes a great coworking space?

Bleddyn Williams launched the first Born Freelance – a community-led workspace for freelancers, students and entrepreneurs – in 2005. We found out what inspired him, why he loves his business, and how he has made it such a big success.

The day after the great storm of ’87 I arrived at Cheapside in the City of London for my first job interview at Lloyds Bank Head Office.

I was twenty minutes late for the interview because the storm had caused a delay in the Intercity125 train from Swansea. Luckily they forgave me and gave me the job! My very first job was developing the Lotus 123 spreadsheets that were used Lloyds Bank board management.

I worked as a software developer at Lloyds for three years and then went on to freelance (or ‘go contracting’ as they called it back then) at Citibank. Working on the systems that settle share trading I had the opportunity to travel around the world preparing each region for it’s own trade settlements hub.

After almost a decade at Citibank I took some time out in 1998, travelled, pondered the meaning of life and finally started an IT company called IT-SOHO in 2002 to cater for small businesses of up to 50 employees.

Back in those days small businesses needed local servers which required technical expertise to set up – it was before the era of cloud computing so my small team of three engineers were very busy until the internet ‘Cloud’ emerged and changed everything!

I sold the IT business after 10 years. Meanwhile back in 2005, while still running IT-SOHO I founded Born Freelance in Fitzrovia London – we rented out the spare desks we had available at the IT-SOHO office. Born Freelance was the first business I founded by consciously combining my own sets of talents with what I saw as a real need in the market for spaces for the newly emerging and growing bank of self employed. It wasn’t called coworking back then though – hot-desking was a more common term.

Everyone that came to view Born Freelance said a) that they never knew something like this existed, and b) It was a brilliant idea! I kept building and growing the community of freelancers in more and more locations and I’m still at it 14 years later!

What is Born Freelance?

Born Freelance is a community-led workspace for freelancers, students and entrepreneurs. Our spaces are small (no more than 150 members) so that a strong sense of community is created and we limit member company sizes to a maximum of three people.

This is to ensure the sense of community, as we found that any companies above that size want to create their own culture within a private office space, whereas one-person companies receive a greater benefit from being part of a community and collaborative working environment.

There’s a not-so-well-known term called ‘solo-preneur’ which resonates with the type of member we have. They like working on their own business but enjoy the social and collaborative aspect of being amongst other talented people.

What has been your biggest challenge?

The biggest challenge has always been trying to do everything myself, which is ironic for someone who now creates collaborative communities (the irony is not lost on me)!

In the beginning I did it myself because I wanted the challenge all of these interesting new tasks that are required to run a business, and later on because I couldn’t find suitable ‘partners’ to help spread the load or stresses that come from the day-to-day highs and lows of running a business.

In later years though as the business has found it’s feet I’ve been able to hire and collaborate with other members in areas like social media, branding, content and good old bookkeeping.

What has been your proudest moment?

As I use the spaces myself I get to see some very special moments. When I see members genuinely connecting with each other then I feel the satisfaction that I created the space in which it happened. We’ve had marriages, lifelong friendships and one couple eloped to Australia together – it all happens here!

What is the most rewarding thing about having your own business?

The enjoyment in having helped nurture such a wonderful community of people that we have at Born Freelance is the most rewarding thing for me – and that I have been able to do this and make a living out of it is a bonus. To love what you do on a daily basis is a privilege.

Do you have any advice for others looking to start their own business from home?

After three years working at home I got a little stir-crazy; for others it might be less! If you are starting from home I would suggest that you help yourself by creating clear daily routines. For example, to shower and wear clean clothes every day, have a separate area where you do your work, exercise outdoors at the same time each day – even if just walking, eat at the same time as you did at work (go out for lunch if you can) as this can really help with your mental health.

Meeting a friend or colleague for lunch really helps. Join some online communities like the Talented Ladies Club Facebook group, so that you have a sense of community even when working at home.

Eventually if your business starts making some money you have the opportunity to mix the home work with a day or two per week at a coworking space where as well as being motivated surrounded by similar people you can be assured of random social interactions which are the spice of life.

You can find out more about Born Freelance on their website.