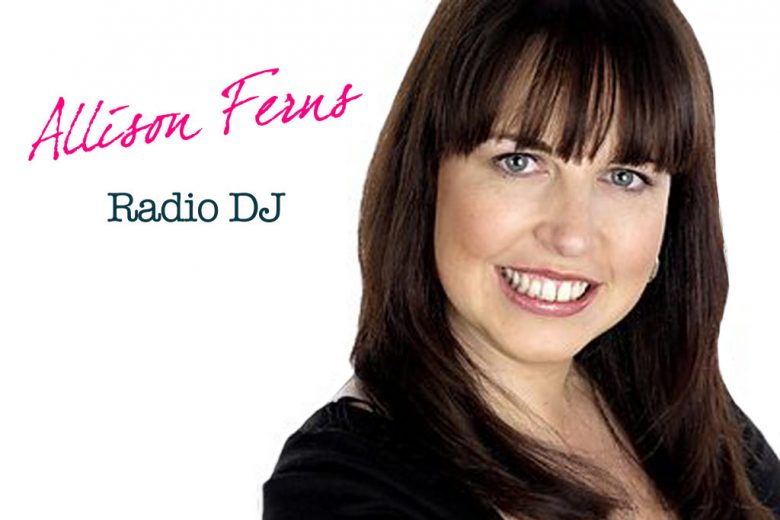 What’s it like being a radio DJ? Mum of two Allison Ferns worked her way up from travel reporter to award-winning BBC Radio presenter. She shares her story with us.

How did your career start? I understand that you once sold cockles on Brighton pier and were in a girl band!

Yes, I’ve certainly had a variety of jobs. From working as a Butlins redcoat to being an intern for Tony Blair at Number 10. But not, I hasten to add in a Monica Lewinsky-type way!

What drew you to broadcasting?

Well after initially training at The Italia Conti Theatre School I knew I wanted to do something in the entertainment business but thanks to the wise words of my parents ( although I didn’t see it that way at the time) I also did a degree in law and politics should I need a ‘proper’ job one day and then followed it up with a journalism qualification.

In a way, what I do now, presenting on BBC Sussex and BBC Surrey is the perfect compromise of the two as I still get to show off a bit whilst also getting the chance to get to grips with the important issues of the day.

How did you get your first break?

My first radio job was working unpaid for a station called Town FM who used to broadcast from a tower block in Edmonton, North London. Glamorous it was not!

I then did some stuff with Coastway hospital radio in Brighton before going for an audition at Southern Sound who were looking for a co-host to work with Terry Garoghan on a show called The Last Bus To Whitehawk.

You worked your way up the ranks from travel reporter to presenter, and have even won a Silver Sony. What’s your advice for getting ahead at work?

Yes I started at BBC Sussex and BBC Surrey as a travel reporter which gave me a great opportunity to listen and learn from others and I guess if I were to give any advice it would be that.

Listen to as much radio as you can, make the most of every opportunity and forgive me for sounding a bit cheesy but stay true to yourself. Radio is such an intimate medium that listeners can spot a phoney at a hundred paces. My favourite broadcasters are those that sound completely natural.

What do you love about your job – and what (if anything) would you change?

I love the variety and spontaneity. I really don’t know when I wake up in the morning what I’ll be talking about that day. I also love the adrenalin rush of knowing there’s only 30 seconds left on a song and you haven’t got a clue what you’re going to say next!

Most importantly though I love the people I get to meet. Not necessarily the big names but the people who are kind enough to share their amazing stories. It’s a real privilege.

Have you had any funny or awkward incidents live on air?

Gosh, where shall I start. I do remember in the early days rather naively reading out numerous texts from a gentlemen called Drew Peacock before the penny finally dropped!

My parents, obviously I’m a bit biased but I think they did a great job of bringing me and my sisters up. If Paul and I can be half as good as parents to Harry and Lois then I’ll be happy.

How do you balance being a mum with your work?

I’d be lying if I said it was easy, although to be honest I think I’d find it harder being at home full time.

I’m very lucky in that I have an extremely supportive husband who helps a lot around the house and a brilliant mum who looks after the children while I’m at work. Yes, there are some days when I don’t want to leave the house but then there are also days when I can’t get in that car quick enough.

When I first went back to work I used to tell the children that I had to go to work so I could buy them nice things, but then of course Harry then uttered the immortal phrase “I don’t want nice things, I just want you!”

Now I tell them the truth – that Mummy enjoys going to work four days a week, but also loves spending the rest of the time with them and they seem far happier with that explanation.

It was lovely recently when Harry asked me to go into his pre-school and talk to his friends about my job. Although when he came to see me at a recent outside broadcast he did comment that talking to people on a beach isn’t proper work – and to be fair, you can’t really argue with that!

What ways do you think being a mum has held you back or helped your career?

I actually think it’s helped in many ways as it’s given me more focus. I want to make my children proud of me and show them that if you work hard you can achieve your dreams.

I also think that having children has helped me relate more to my listeners and given me greater empathy.

What would you like to be doing in five years time?

Wow, not sure I know what I’m doing next week, never mind in five years time. I just hope my family are happy and that I’m still able to do a job I love.

What advice do you have for other working mums looking to achieve the mythical balance of successful career and family?

I’m not sure I’m the right person to ask as I’m still really trying to figure that one out for myself. Perhaps someone could let me know when they know.

The only advice I can offer is to never buy clothes that need ironing, and ban Weetabix from the breakfast table. I will never get those hours back that I have spent scraping it off the floor!

You can listen to Allison’s show live on BBC Radio Sussex at 12pm on weekdays, or online on BBC iPlayer Radio.