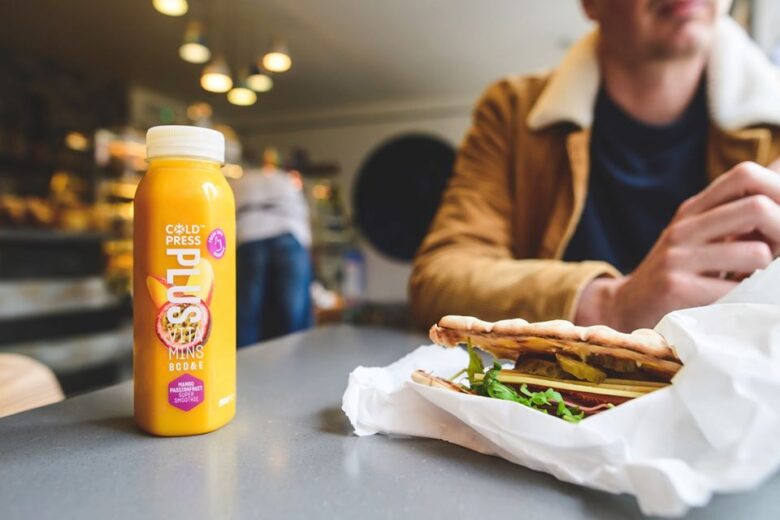 Find out how Andrew Gibb was inspired by the development of HPP to launch Coldpress.

I’ve always itched to be an entrepreneurial brand owner but spent my formative career years wisely working on consulting projects with a diverse array of blue-chip luminaries, including Nestle, Dulux, Heinz and Unilever, where I hoped to ‘spin out’ a business from one of the many high profile marketing assignments he’d worked on.

Opportunity came knocking in 2005/6 when I was first introduced to HPP (high pressure processing), a long overdue high-tech alternative to heavy-handed heat pasteurisation that could be used in the manufacture of top-drawer fruit juices, smoothies and purees.

Preshafruit in Australia was testing HPP boundaries that could ultimately revolutionise a ‘set in its ways,’ premium juice fixture; however with Australia promising only a compact 20m consumer opportunity compared to Europe’s sprawling 230m catchment, it soon became clear that my future lay in sunny London

What’s the idea behind Coldpress?

The simple thinking behind HPP is to make juice work harder and taste better, vindicating the ‘permissible’ natural sugars that inevitably inhabit fruit and veg based products.

The problem for the UK’s juice fixture is that it lost its way, dependent on outmoded heat-based technology (heat pasteurisation) whose heavy-handed nature inadvertently strips everyday juices of a lion’s share of their enviable taste cues and nutritional integrity.

In stark contrast, HPP uses ‘clever science’ hyperbaric pressure that kills any spoilage micro-organisms without compromising the ingredients taste or nutritional worth.

The quandary the UK’s stagnating juice fixture faced were two-fold: the decline of breakfast as a key, standalone meal (increasingly on-the-go) and a growing number of food and drinks that also offered strong nutritional benefits. Juice and smoothies suddenly appeared to be more of an occasional nicety than an everyday necessity that provided a good quota of vitamin C and rehydration but little else.

Such was the gentle nature of HPP that juices now tasted closer to freshly squeezed juices than ever! It was also perfectly plausible to create single varietal offerings which reflected subtle flavour taste note nuances, which meant a Pink Lady apple juice tasted quite different from a Golden Delicious.

With HPP there’s certainly no scope to use second-best ingredients that is more than feasible with traditional juices (since heat pasteurisation blurs taste cues) because HPP is a very honest/transparent process, which means what you put in, is exactly what you get out!

Juice was struggling to deal with its natural sugar ties, Big Soda (the big juices owned by Coke and Pepsico) who were tied to traditional heat pasteurisation due to the sheer scale of their production needs sought to try and discredit HPPs relevance, whilst internally Coldpress’s dependence on third party manufacturers resulted in inconsistent batches which quite rightly frustrated retailers.

By 2018 Coldpress was the last HPP juice brand standing and it was clear a new direction was needed!

What was becoming only too clear was that consumers craved consistently tasty, harder-working juices that supported their increasingly hectic lifestyles, which was the very moment I launched the UK’s first range of HPP juices and smoothies with added vitamins (B&D in addition to C) to provide a new generation of tasty, well-rounded drinks.

If that wasn’t enough, Coldpress invested heavily in its own production and packaging facility in Spain, which not only ensured significant economies of scale, but unrivalled quality production.

A new punchy brand identity was needed where the constituent ingredients became the ‘real’ heroes.

How did lockdown affect your business?

Lockdown proved to be something of a long overdue renaissance for top tier juices like Coldpress. For one thing, the start of Lockdown saw a growing demand for vitamin D rich products.

For another a less-rush around/stuck at home mindset meant that growing numbers of consumers rediscovered unrushed breakfast rituals, (taking time out to eat and drink sensibly) which led to a greater appreciation of tasty ‘comfort food and drink’ of a healthier living disposition and a greater enthusiasm of nutritionally robust functional foods.

This was also the moment that Coldpress decided to improve its recyclable footprint by swapping out its ‘impossible to recycle’ black caps with altogether more planet-friendly clear caps.

This was also the perfect timing to create a long overdue, credible online shop, because juice like so many other product categories before it (pet food, bottle water) is not something that everyone wants to lug around a supermarket in a basket or trolley.

Watch this space for many new listings (on top of Ocado, Waitrose and Co-op…) and a new generation of product innovation because HPP allows anything fruit and veg be the best version of itself at ‘everyday affordable’ price points.

Find out more about Coldpress.