How to resolve household conflict 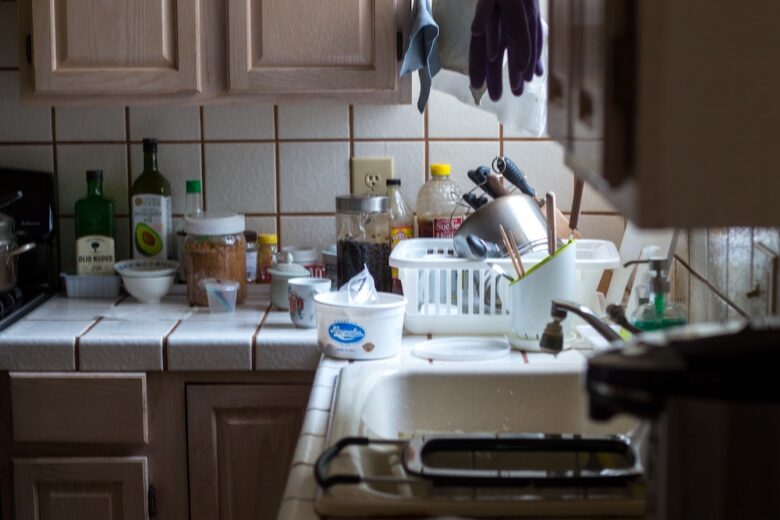 The sink is full of dirty dishes, the bin resembles a game of Jenga, and your housemate’s gym gear is draped over the chair. Didn’t they say they would clean up… two weeks ago?

An ongoing cleaning saga between housemates can be so cliché. However, it is it is a common dispute that has received greater tension as flatmates spend more time at home because of lockdown. But how do you bring up your grievances without coming off like a tyrannical dictator?

Vanessa Perry from Unclutterer is an expert when it comes to navigating the minefield of communal living spaces. And she says that the first hurdle to overcome is worrying about taking control of the situation.

If it is something that seems like a genuine issue, then somebody has to step up and be a leader, and as you’re reading this, it looks like it’s going to be you. Do not view yourself as a dictator, more the head of a movement!

You’re trying to make the home a better place. So, do not start screaming and pointing fingers? No, a level head, and a well thought out approach is all you need. You’re looking to resolve a situation, not start a conflict.

Am I the problem?

It is natural to have anxiety when dealing with conflict (there is a reason we ignore problems until it becomes unbearable – we are only human). But before approaching the ‘problematic’ housemate, it is best to establish what you want to resolve.

Different people have different levels of tidiness. To some, a book being left on the table is unacceptable, while others cannot see a problem in never putting their washing away. Write down a list of the issues you have with the housemate and decide whether it is a problem such as a messy house, or something deeper.

Too many discussions begin on one topic, and quickly mutate into an argument about something completely unrelated. Approach the situation with a friend, and ask if you think you are overacting, or if they have noticed you complaining about the housemate more than usual.

Whatever the answer the conversation, if it is agreed that the housemate is not pulling their weight, then that is the matter you need to focus on for now.

Listing out everything you have an issue with is going to overwhelming for them and will in turn put strain on the relationship.

It is also good to remember things that do not help such as leaving passive aggressive notes on things or separating your items from theirs. It’s only going to create tension’.

It’s unlikely that you are the only housemate who has noticed the issues. If you live in a place with more than two people, then you probably already know what the other person thinks of the mess.

Whether it is little passive aggressive questions like ‘Oh, did Dave leave this here?’ or full-blown complaining, you know who is on your side. It sounds a bit Machiavellian but having an ally to talk things through with can make the process so much easier for all parties involved.

It can also help you establish your plan of action. Is there more than one person not doing the housework? Would it be easier to move out if it is four lazybones Vs you? It sounds like an extreme situation but moving out and finding a new home is better than fighting a constant uphill battle.

So, it is decided – you’re going to have ‘The Talk’. But where do you even begin?

First of all, you need to establish and common and safe ground. Don’t just walk into the kitchen while they’re boiling some pasta and go “Hi, how you doing? Good? Anyway, this place is a mess and it’s all your fault”.

Ask them when they are free to talk and plan it out. It does not have to be around a meeting table with a slide show, but away from distractions like computers and phones is a great start.

Start by bringing up the common areas such as the kitchen and bathroom and explaining that it seems unfair that you’re always the one cleaning up after people. Your housemates might even not realise they need to clean, so avoid resting all the blame on them, even if you know they are purposely avoiding cleaning.

Clarify that it’s a joint effort, and that you’re in this together, using phrases like ‘I feel we could …’ and ‘If I do this, you could …’ as opposed to throwing accusations like ‘You never do this …’.

If you get the feeling, they do not see a problem with their messy ways, try to appeal to their compassionate side and help them see it from your point of view.

Always make it about the ‘housemates’ as a team, not about them. You do not want to cause an argument and for them to become defensive. The point is to help them understand the situation, how it makes you feel, and how it can be fixed.’

Will a rota help?

Ask if a rota would help them, as opposed to pushing one on the household. Personally, I prefer a more relaxed system of a list that must be completed by a certain date in the month, instead of ‘X has to clean the bathroom, and Y has to clean the kitchen’.

Having a list in the kitchen that can be ticked off gives your housemate an idea of the system in place, and the time frame. It also sets up the opportunity to ask them ‘Could you do the bathroom if I do the kitchen?’ whenever you are both in the same room as the list.

It is all about trying to clean together, even if you feel you have already been working above and beyond.

If you want a more regimented rota in place, then that is fine but remember to stick to it. If your housemate is slow doing their chores, do not pick up their slack, even if it means going without your favourite plate for a day or two. Let them work at their pace and hopefully they will get into the groove of things’.

Unfortunately, there are some scenarios where you are stuck with a housemate who just doesn’t want to change, or doesn’t see a problem with the situation they’re putting you in.

Never try to trick them into cleaning by moving their stuff sink or leaving the cleaning products outside their room. Always make suggestions to fix the problem.

If you are happy to pick up their slack, then you can make a compromise of paying less bills or rent? It’s a good way of establishing the time and effort you give up when washing floors and scrubbing the toilet.’

If all else fails, look to make compromises and listen. Some problems can’t be solved, but it could be a case of not understanding what they’re going through at this moment, and although knowing that won’t help you clean up the dirty plates, it may help you establish a bit more sympathy.

Published on Jul 31st, 2020 by Hannah Martin
We use cookies on our website to give you the most relevant experience by remembering your preferences and repeat visits. By clicking “Accept”, you consent to the use of ALL the cookies. However you may visit Cookie Settings to provide a controlled consent.
Cookie settingsACCEPT
Manage consent