Diary of a mum returning to work – Clothes swap 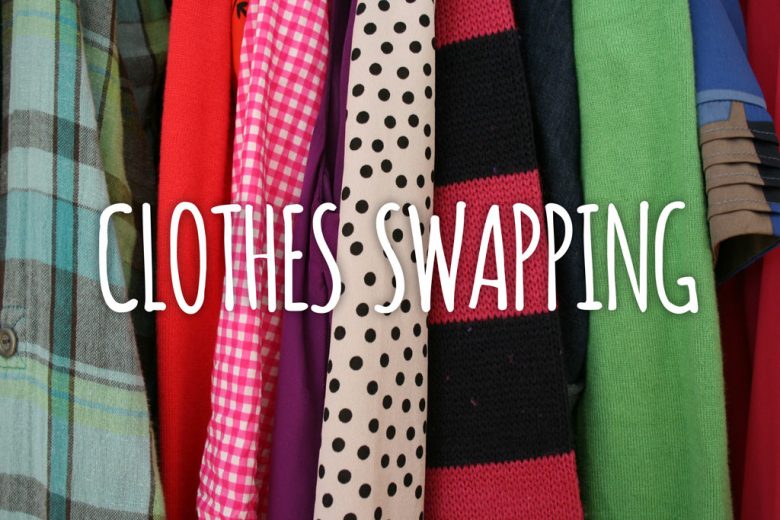 Freelance writer and mum of three Lucy Mason loves a good snoop around someone else’s home (especially when wine is involved!). Even if it means opening up her wardrobe rejects for potential fashion ridicule at a clothes swap party.

When a friend first suggested a clothes swap party, I did a mental rummage of my wardrobe for items to donate. I’m pretty good at clearing out old clothes – I love the feeling of loading up a bin bag and dropping it off at the local charity shop (before making a speedy exit before they see the ‘quality’ of the stuff inside) – so I couldn’t think of anything I’d want to swap.

But I’ve never been to a clothes swap party before, and was curious to see what other people would get rid of. Plus I could do with some new clothes, I still need all the help I can get since writing this, and I’ve often found the most amazing stuff in the least likely places. Also, I’d been told the person who would be hosting the party has an amazing house which I really wanted to see. And of course there would be wine.

But what could I take to swap? I considered buying something from the charity shop but that seemed like cheating somehow. So I had a look through my wardrobe and was surprised at how decent some of my cast offs are:

As promised, the clothes swap party house was amazing, and I was particularly impressed by the electric gates. Inside were 10 or so fellow swap-ees chatting, drinking wine and laying out clothes on a large table in the middle of the room.

As soon as everyone had arrived we dived in. Well I say ‘dive’. As I didn’t know everyone and was still very sober, I found myself at first just walking around the clothes table, politely picking at the clothes but not really getting into the spirit of it. It felt strange rummaging through someone else’s clothes when they are standing next to you, and I was also concerned no one would like my stuff and I’d be forced to gather them up at the end of the party – the only items left on the table – and take them home again.

But gradually people started trying things on, drinking more wine and the atmosphere began to relax. There were some lovely clothes but a lot of them were a bit too ‘worky’ and formal for me. And most were size 10 or 12 which was great for skinny minnies but anyone who didn’t fit into these was limited to the scarves and accessories.

Other than that it was good fun. And once I’d seen someone trying on my silk lace top and I’d found an amazing J Crew chequered strapless dress (looking a lot better than it sounds), I could see what a clothes swap party is all about.

In fact it was good results all round. I managed to leave with two dresses and a brown corduroy top (again, so much lovelier than it sounds) – none of which I probably would have chosen if I’d seen them in a shop, but great anyway.

Two out of three of my clothes went to new homes, but the green jeans seem destined for the charity shop. Who knows, maybe someone else will buy them, realise they don’t fit and they’ll spend another three years at the back of a wardrobe waiting to be put on Ebay?