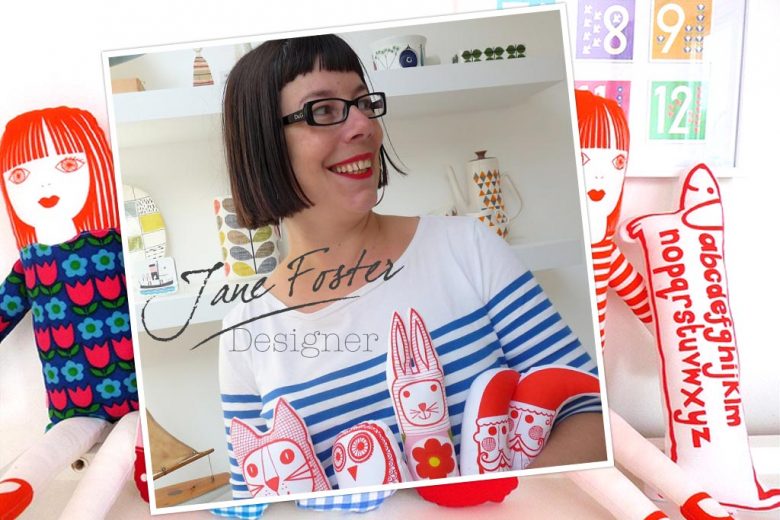 Becoming a mum to her daughter Polly gave Jane Foster the courage to give up a career as a music teacher to pursue her passion for design. Today she’s appeared in national magazines, has a print in Ikea and has just published her first book. She tells us her story.

How did your career start?

Although I studied art for A’ level at school – where I had a really cool art teacher who let me experiment with printing on fabric – I actually chose to go to music college in Manchester when I left. I spent five years studying violin and piano, and another year doing a PGCE, training to teach music and expressive arts at secondary level.

Before starting a career, I spent two years teaching the violin in the school of fine art in Cambodia for VSO. This was in the mid-90s when the country was still very dangerous, and we had to travel around in convoy and be careful of landmines.

When I returned to the UK I moved to Brighton to teach the violin. I discovered a place where I could print and did a six week recap course, and after that finished started using the studio as a drop in – and began to realise that I didn’t want to be teaching any more.

When did you get your first break?

I started going into the studio during any free time I had, printing fabric to make bags to sell in local shops. I also started getting involved in open house exhibitions. It was at one of these that I was first spotted by a talent headhunter for The Art Group. Through them I had some cards and print published by Habitat, which encouraged me to do it more. I was also spotted by a lady who was relaunching cloth kits online, and she bought a few of my designs. I also designed some rag dolls for her.

I reduced my teaching hours to do more printing. I also realised that I had a knack for spotting rare vintage fabrics (which not many people were selling at that time) and started selling my finds on eBay, or turning them into cushions to sell. I was making a good living from it at that time, which gave me the confidence to think I could maybe give up teaching.

I opened up my own website selling vintage fabric cushions while teaching part time. I also started up my own site selling my screenprints, and began selling more designs for the Art Group.

When did you decide to give up teaching for design?

While I enjoyed teaching, I hated spending hours planning lessons, and wasn’t having a lot of fun. I was also desperate to start a family, but felt strongly that I was never going to get pregnant in such a stressful situation. I also decided that I didn’t want to struggle so hard for a child, just to put them in full time care while I worked. It made me determined to carve out a career for myself that let me be around a child and flexible.

So while we were waiting to become parents, I made sure I was careful at saving. I managed to save £8,000 which, with the amount I was selling at that time, I knew would enable me to give up teaching.

I finally gave up teaching five years ago, a week before our wonderful daughter Polly arrived. Together, my partner Jim and I juggled childcare and I worked through Polly’s sleeps, and at night when she was teaching.

Two years later, we moved to Devon and set up business here. We chose a home that was low maintenance and within easy walk of a post office, coffee shop and good school. We taught ourselves how to expose print screens so we could print from home, and hired a local company to create a new website. To ensure that our toys meet UK safety requirements, we now get them printed by another company, and I put together the components.

How did you start to build a reputation for your work?

I started blogging for fun, sharing the things that inspired me and what I bought and was doing, and gradually started getting a bigger following. Print and Pattern featured me quite a few times as their daily read, which really helped. I also put people on my blog list and blogged about them, and things escalated from there.

I’d often include pictures of my home in my blog, and magazines started getting in touch to ask if they could feature it. My home has appeared in the Independent on Sunday, Coast Magazine and Ikea’s Live magazine. I’ve also featured in Mollie Makes and other crafty magazines. After a while, you find that social media takes on a momentum of its own.

Jim and I work together around Polly. We only live across the road from school, so I’m usually back at home working just after nine every morning. I’ll design and Jim will scan in and touch up the images. He’s much more technical than me, and I rely on him for help with computer programmes. He also handles the screen printing and couriers for big orders and takes care of the housework.

I pick Polly up from school at three and spend time with her until she goes to bed at seven. Then I work until midnight or later.

The school holidays are harder as we’re looking after Polly, but still need to operate. So we’ll take it in turns to spend a half day with her, or sometimes she’ll create things alongside me. Or we’ll do things together as a family.

I’m starting to think about branching out, and renting an office away from home so we can switch off and escape the house.

We’re lucky that Polly’s an easy child, and I always know I have that uninterrupted time at night. I also have a friend that helps stuff toys, and two other ad hoc helpers for big orders – last night I sat watching TV stuffing 30 father Christmasses!

What’s your next big plan?

It’s hard to make a living just by stuffing and making toys, especially if you sell wholesale. The best thing is to sell a licence for people to use your designs. I got my Fish Supper print into Ikea, which has turned out to be really lucrative. Every three months I get royalties from the sales – and to date, in under a year, they’ve sold over 69,000 prints! If I get 10 prints into Ikea I can retire!

I’m also in talks with a company in Japan who are thinking of using my designs on products in their department store.

But my most exciting project is my new book. About a year ago, I got an email out of the blue from an agent working for the talent agency William Morris Endeavours, asking if I’d ever thought of writing a book. We met in London and came up with ideas for a proposal, which was sent out to publishers. I ended up getting a three book deal with Collins & Brown. The first one is out this month and is called Fun with Fabric. It’s full of projects to make at home. The first section includes ideas for vintage and found fabrics, and the second section teaches you how to print your own fabrics, and where to go to find digital printers. It’s got lots of simple but fin and creative projects.

There’s no time to sit and relax though, as I’m already working on the second book!

It’s not always been easy. There have been times I’ve been so worried about when the next order will come in. As a teacher I’d got used to a regular salary, and had to adapt to coping with uncertainty.

Sometimes things can seem tough, but if you want to succeed you can’t afford to give in. After teaching hundreds of people to play the violin, and watching the majority of them give up, I’ve realised that few people really stick at something – but when you do, you reap the rewards. I practised the violin for six hours a day for years, and it paid off. Now I’ve transferred that passion and drive into my work.

When you work for yourself you can never afford to get complacent, you always need to be thinking about what to do next.

How does it feel now you’re successful?

My success hasn’t happened overnight by any means. I’m a workaholic, and the only time I relax or do nothing is when I go for coffee. Sometimes it’s a lot of hard graft, but if I ever feel ungrateful I only have to think back to the hundreds of miserable hours I spent lesson planning! I used to long to do something for myself, and I love working for myself now. It’s not hard to find the enthusiasm for what I do – and in fact even if I wasn’t getting paid to do this, I’d happily do it for free.

I live by the motto, ‘If you do what you like that’s freedom. And if you like what you do that’s happiness.” These days I’m both happy and free, and I love it!

You can buy Jane’s book, Fun with Fabric on Amazon, and browse her many products and designs on her website.