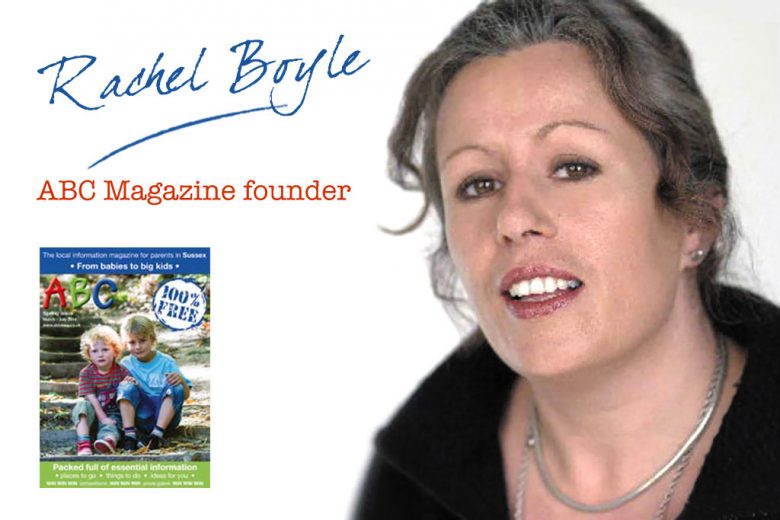 When Rachel Boyle became a mum she was frustrated by the lack of good local information for families – so she set up her own magazine to provide it. 18 years on, ABC Magazine is the leading free parenting magazine in Sussex and has grown into Surrey, Kent and Hampshire too. We find out the secret to Rachel’s success.

Well, I’m a chef by training, but after working for five years both here and abroad I decided it was time for a total career change, and started working as a sales rep for a magazine publisher. My boss had been in the business for 40 years and taught me all he knew – and I soon realised I got the ‘buzz’ of a sale and became addicted!

How did your career change once kids came along, and how did you feel about it?

Once my first son was born I knew instantly that my priorities had shifted and he was what my life was now all about! I also realised that there was no one place for me, as a new mum, to find all the information I needed to bring up my baby and keep myself sane.

I was like a sponge and wanted to know everything about this new world as a mum, which up to this point I knew nothing about. I wanted to know where to go and what to do, where to find this and that locally to make my new life as fulfilling and easy as possible.

What inspired you to start ABC Magazine?

Without doubt it was my son Joe. I couldn’t believe there was no one single source of good local parenting information – I wanted to know everything about everything in my new world, but I found the information really difficult to find. There was lots going on but no-one had pulled it all together and presented it in a readable and friendly way, and I realised I could do that!

And so the concept of ABC was born – my son was six months old when I started speaking to local businesses to see if they would support such an idea, and it soon became apparent that they would.

I set out to cover my printing costs on the first issue and hoped the rest would fall into place. I launched ABC on my son’s first birthday with (looking back) a rather embarrassing first issue, a flimsy 32 page magazine with just 28 advertisers. But from the reactions I received from both readers and advertisers, I knew ABC had a future.

How did you go from having an idea to actually bringing it to life?

A lot of hard work! I had the experience of selling advertising space from my previous life and I knew if I could convince enough advertisers to cover the costs of production that local mums would want the information.

It was a huge learning curve where I begged, borrowed and learned from everyone I knew, but it started taking shape pretty quickly and soon I was learning to put a magazine together on a borrowed computer – and my ABC dream was becoming a reality.

Who is your readership, and what areas do you cover?

ABC is aimed at local parents with children under the age of 11. However, by default we find we have a huge following of parents who discover ABC when their children are young and then become regular readers and as their children grow they say they can’t live without their ABC!

ABC is a countywide publication and through franchising we now have editions in Sussex, Surrey, Kent and Hampshire with a 100,000 print run each issue as well as a digital online magazine too.

What can people read about in the magazine?

Everything to do with being a parent. From birth options to choosing a school, from where to go on a wet Saturday to learning about how to cope with a faddy eater and everything in between!

ABC is a combination of many people’s efforts so we always strive to bring fresh opinions to every subject we cover, and those subjects seem to be limitless. It still amazes me how many people are out there ‘doing their thing’ and how many options we have as parents – ABC aims to help make the decisions we all have to make every day about the well-being of our families just a little bit easier.

What were your biggest challenges in launching ABC, and how did you overcome them?

My biggest challenge was convincing enough advertisers that there was a need for a magazine like ABC, as at the time nothing like it existed.

I’m pleased and proud to say that 18 years down the line some of the advertisers which supported the first issue are still with us today – some of them have actually been in every issue! We have become friends, our children have grown and we have got older but ABC still works for their business. As ABC has gone from strength to strength I’m proud to have helped other local businesses grow too.

What have been your biggest business successes or proudest moments to date?

I guess setting up my first pilot franchise in Surrey ten years ago has to be somewhere near the top, as well as the ongoing success of the four franchised county editions we now run.

My proudest moment though must be when we won the regional and then the national NatWest Venus Small Business of the Year Award last year – to have all our hard work recognised nationally was a fantastic feeling!

What’s the secret to your longevity – especially in such tough times for magazines?

Ummm I’m not sure! Hard work, honesty and providing something people really want I suppose all help. Although the last few years have been ‘rocky’ I believe the strong survive and the weak fail. Over the years many people have tried to copy what we do, but it is not as easy as some people seem to think and many competitive magazines have come and gone since ABC was born.

We have been the leading free parenting magazine in the county for 18 years now but we never sit on our laurels and always strive to improve what we do – I want to offer a service to both our advertisers and our readers that we are proud of.

We are affectionately known by parents as ‘the local parenting bible’ and although I’m not sure what the church would say about that, we’re happy to be thought of in such terms!

What are your tips for other mums who may want to do something similar?

Do your research thoroughly and ensure that there is actually a need and room in the marketplace for your idea. Willingly accept any business advice on offer and really listen to the opinions of others, particularly those with experience in your chosen field.

Trying to compete with an established business is a risky strategy as they are established and undoubtedly know more about it than you do! There is always room for competition but that competition has to be good from the outset or it will never be given the chance to grow. People know what they like and like what they know!

IF IT IS TO BE IT IS UP TO ME – these ten, two letter words are always in the back of my mind and I believe it is important to think that if you want something badly enough and you work hard enough anything is possible.

You can find out more about ABC Magazine on their website.