Why her late diagnosis with cancer inspired Dafina Malovska to campaign to help save the lives of 7,600 women a year 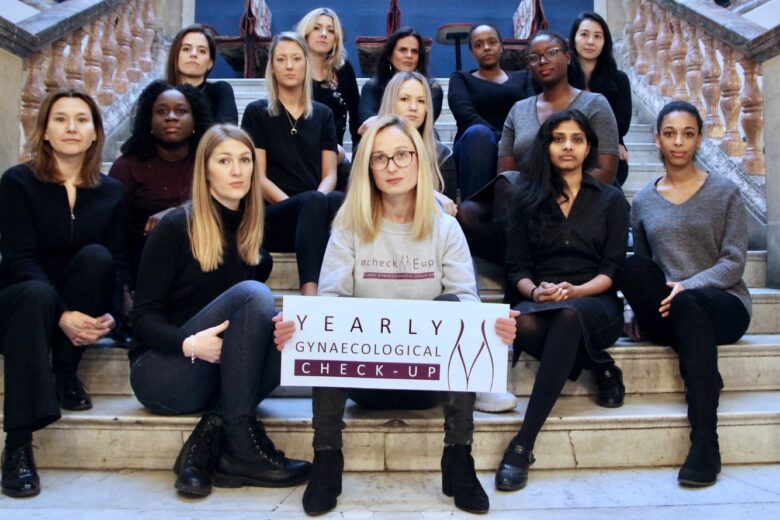 Dafina Malovska’s late cancer diagnosis put her into early menopause and robbed her of her dreams to have a family.

But it also created in her a desire to change the fate of other women, through her petition for all women to have a yearly health check. Here’s her story.

Five years ago I was living a normal life, unaware I had cancer

My name is Dafina and I’m 40. I am originally from North Macedonia but I have been living and working in London for 15 years.

Five years ago, I was living a normal life and doing all the normal things that young people do; working on my career, long hours in the office, travelling, making friends and generally enjoying life.

But while I was planning my future, I didn’t know that my life was already in danger. I had no idea I was carrying a growing tumour, eventually weighing 500g.

In July 2014 I started becoming very bloated, which was unusual for me. I saw my GP almost four months in a row, but she didn’t touch or examine my abdomen even once. Instead, eventually, she sent me to see a gastroenterologist to have my stomach checked.

The gastroenterologist didn’t discover anything either and only recommended me to take Activia Yogurt. So I tried to continue with my life as normal, but with the constant bloating.

Within a few months I started bleeding between my periods and then I knew that something was not right. I went to see a different GP who referred me to a gynaecologist.

However, in the next few days I had to fly to North Macedonia (my country of origin) to surprise my sister for her birthday and I was still waiting for the gynaecologist appointment in London.

As soon as I arrived in North Macedonia, I booked to see a private gynaecologist. The gynaecologist there did a proper check-up including a transvaginal ultrasound (complete pelvic examination) and quickly discovered that I had a huge tumour on my uterus. It was 14cm long and she advised me to have it removed immediately.

I was booked in for an operation in four days’ time. I was terrified that I would need to have a big operation and the only thing that gave me the strength to proceed with it was that I wanted to protect my uterus so I could still have children one day.

After the operation was done, I woke up in intensive care and immediately had to do an X-Ray on my chest. Nobody explained why at the time.

After the X-ray I was brought to my recovery room in the hospital where I was told that they were waiting for the results of the tests on the tumour; this alarmed me.

“You have stage two cancer… and it’s spread”

Shortly after that the surgeon entered the room and told me the life changing news. “You have stage two womb cancer and it has spread to your ovaries”. I was devastated and so afraid of what I would hear next…

“Will I survive or do I have just a few days to live?”

The surgeon advised me that I must go back into surgery that evening to completely remove my uterus and my ovaries. I needed a total hysterectomy, in order to prevent the cancer from spreading and to ultimately save my life.

That was the second item of shocking news that day! This sentence meant the plans for my future, of having my own big family one day, had completely disappeared.

I discussed all the options with the surgeon and asked if I could freeze my eggs, but as I had a very rare type of cancer, called Leiomyosarcoma, which was oestrogen receptive, this option was out of the question.

Since that day I’m not able to have my own children and after the operation I was put into immediate surgical menopause.

Every day 21 women die from gynaecological cancer, thanks to a late diagnosis

It’s been five years since then, and every day I have to deal with the consequences of early menopause, such as: hot flushes, night sweats, vaginal dryness, loss of libido, mood swings, and osteopenia (lower bone density). I am only 40!

But I am happy that I am still alive and I can share my story with you. I wouldn’t want what happened to me to happen to anyone else, especially as this can be prevented simply if detected earlier.

Sadly, more and more often we hear that women and girls in the UK are diagnosed too late with some type of gynaecological cancer.

According to Cancer Research UK, over 21,000 women are diagnosed every year (that’s 58 per day) with one of the five gynaecological cancers. These are:

Why are women only tested for ONE of the five killer gynaecological cancers?

Cervical screening (a smear test – which is a preventative test) is the only available test for our reproductive health, which is very important. But this test detects the likelihood of only one type of gynaecological cancer, which is cervical cancer.

3,000 women are diagnosed every year with cervical cancer. But over 18,000 are diagnosed with the other four types of cancers for which there is no screening at all. I wonder how many of these women were diagnosed too late.

I had my smear test which showed that everything was normal a few months before my diagnosis of womb cancer.

But, if I’d had the chance to see a specialist in women’s health at least ONCE in the previous years and had a full check-up including pelvic examination, my tumour which grew to 14cm long and weighed 500g, would have been discovered much earlier. And I would have had a chance to remove it before it spread to my other organs.

Currently, the UK’s approach to healthcare is reactive, not preventative. The system is symptom-driven, which relies upon us discovering an issue ourselves and then going to our GP.

But by the time we get the symptoms the issue has already developed, and it can be too late, like in my case for any preventative measures.

Most gynaecological cancers are frequently not detected early enoughto be successfully treated because, at the early stages, these cancers are often asymptomatic or present with non-specific symptoms. But we are still told to wait for our symptoms to develop and then see our GP. This is WRONG!!

Women in the UK don’t get any regular women’s health check-ups or any preventative screening for all female organs to ensure and maintain good health for women. In the UK women suffer or die from conditions which would have been diagnosed and treated much earlier in other European countries.

Gynaecological cancers can be detected (and deaths prevented) with regular screening

Gynaecological cancers and many abnormalities can be detected and diagnosed by a gynaecologist (through a basic gynaecological exam) or a GP with appropriate training.

Regular women’s health check-ups is common practice in many countries including France, Germany, Belgium, Finland, Sweden, the US, the Philippines and many other countries worldwide – even North Macedonia! So why not in the UK?

If this also becomes normal policy in the UK it will save many lives by enabling the early diagnoses of gynaecological cancers that have no screening programmes. It will also pick up a range of conditions and complications that significantly affect a women’s quality of life, such as endometriosis and fibroids.

Offering yearly women’s health check-ups from the age of 18 onwards will contribute towards educating women about their gynaecological health. It will also help to break the old fashioned taboos around this subject and will bring an essential positive change to thecultural and social attitudes towards women’s reproductive health.

It will also give girls and women a chance to openly discuss any gynaecological concerns, such as periods, sex, contraception, fertility, pregnancy and menopause, with a specialist, in confidence.

By doing this, going for a women’s health check-up will become just as normal as going to the dentist.

I’ve started a petition to help stop the deaths of over 7,600 women a year – and I’d love you to sign it

To make this happen I started a petition for Yearly Women’s Health Check Ups in the UK for all women from adolescence.

I would be very grateful if you would please support my petition and help to bring about this much needed change in order to help reduce the deaths of over 7,600 women each year.

Although the petition has gained support from a few MPs, GPs and gynaecologists, support from the people helps the most to make the difference and achieve the signatures required.

Please also share the petition far and wide to help make this change for all women dear to you! Thank you very much.

You can follow the progress and the wider movement on social media:

Published on Sep 13th, 2020 by Hannah Martin
We use cookies on our website to give you the most relevant experience by remembering your preferences and repeat visits. By clicking “Accept”, you consent to the use of ALL the cookies. However you may visit Cookie Settings to provide a controlled consent.
Cookie settingsACCEPT
Manage consent