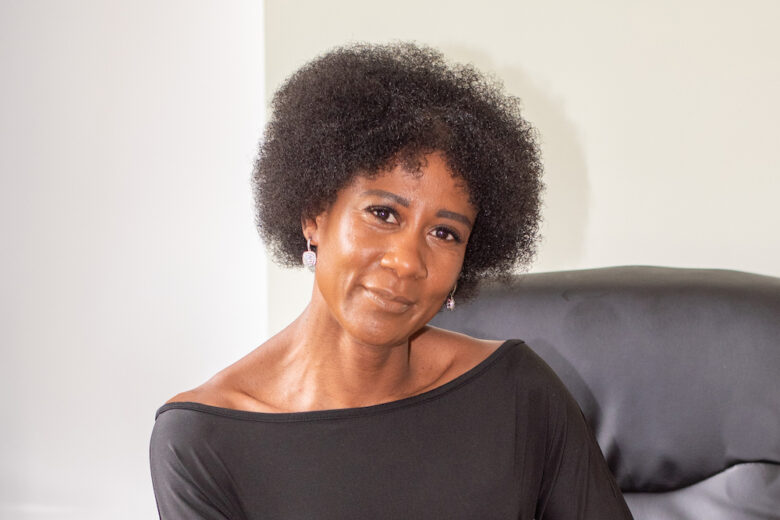 The UK’s leading black female Barrister, Paula Rhone-Adrien, shares the racism she had to overcome on her journey to the Bar – and what she’s doing about it.

My journey to the Bar has truly been a thrilling one. I made up my mind at about eight years of age that I was going to fight for those who felt unable too (for whatever reason), to right social wrongs and, of course, world peace.

Growing up in the East End of London in the 80’s, I was surrounded by the impact of deprivation, how this was an accepted norm by my community and learning the constant consistent message of ‘knowing one’s place’.

‘Don’t bother trying – it will only disappoint’

I had to learn very quickly that the world I wanted didn’t want me, “So don’t bother trying it Paula, it will only lead to disappoint”.

Thankfully, my mother didn’t believe those messages and so I learnt to switch off my antenna so I no longer recognised the incessant self defeating signal. Admittedly, this was sometimes at my peril. In no longer hearing the signal, I reacted slowly to the mistreatment and injustices that were levelled against me.

My local bank manager lied about my student loan application

There was one occasion when I was dealing with a very well known high street bank. It was necessary for the local manager of the bank to sign off my special student loan to go to Bar School. Every few days I would pop in to see how he was and every time he would respond that the application was being processed.

Well, I was a week into my schooling and my fees still hadn’t been paid and I was being threatened with having to leave the course. I was in the city studying at the time and was told by the administrator to go into the branch across from the college to find out what was going on….I’m sure you’ve already guessed it. Yes, that’s right, my local branch manager hadn’t bothered to make any application at all. He was lying, every single time I went to see him.

This type of treatment was normal

The city branch manager apologised profusely and was clearly embarrassed. I got some flowers and chocolates I think, but never once did I think of complaining. Why? Because this type of treatment was normal.

I had school teachers, college tutors and university lecturers, gently take me aside to help me understand (so kind of them) how difficult it was going to be for me, how I was unlikely to make it and how I should maybe consider a different career path: social worker; office manager; or teacher, as if these roles were for some reason (and to this day I genuinely don’t know why) more achievable for me.

Not one of my teachers supported me or assisted me navigate what truly was an alien world to me.

I was homeless more times than I could count

I couldn’t afford a mobile phone for much of my years of study, I became vegetarian because I couldn’t afford to buy meat and shopped at my local market in Green Street, Upton Park at the end of the day so I could buy the cheaper bruised and unwanted fruit and vegetables.

I was homeless so many times that I lost count, and will be forever grateful to my friends and long distance family members who would send me food packages, do an occasional food shop for me, and bag up old clothes for me to wear.

I was shocked at the racism from other Barristers

So when I finally made it, donned my wig and gown and marched into Court ready to fight the many social injustices we all encounter, I was staggered that some 20 years on I was still having to battle racism from within my own ranks.

When I started practising I was so shocked at the racism I encountered from other Barristers that I lost the ability to speak – not great for someone whose job it is to argue. I was too scared to complain and so instead, internalised the pain. Eventually I learned to shrug my shoulders or laugh it off.

However as we approached lockdown in March 2020, I suffered two incidences of racism that I refused to ignore. The incidents happened whilst I was at Court, the perpetrators were other Barristers, and it was in front of other Barristers who, whilst looking incredibly embarrassed on my behalf, said nothing.

The perpetrators weren’t embarrassed, on both occasions they were happy to turn their backs on me, refusing to engage with me and not at all perturbed about any potential backlash…they of course were right.

Why I couldn’t stay silent any longer

I decided I couldn’t stay silent anymore and since then have worked with the Bar Council to increase awareness of racism at the Bar and it’s impact on Barristers of colour.

So my antenna is back on, and I now listen out for those who still feel unable to come forward and seek help. My journey to the Bar followed a path I thought it had too because I had dared to ignore the earlier messages from my childhood. I put up and shut up when I felt I had suffered an injustice.

However, I now know that I am on a new path, one where I am learning to speak up for myself. Whilst at first scared, I am now enjoying this part of my journey. I hope my story inspires all readers to not only challenge their fears and those who prey upon it, but accept the challenge knowing that they have the strength to beat it.

Paula Rhone-Adrien is the UK’s leading black female Barrister. Keep up to date with her on social media @FamilyLawGuruUK