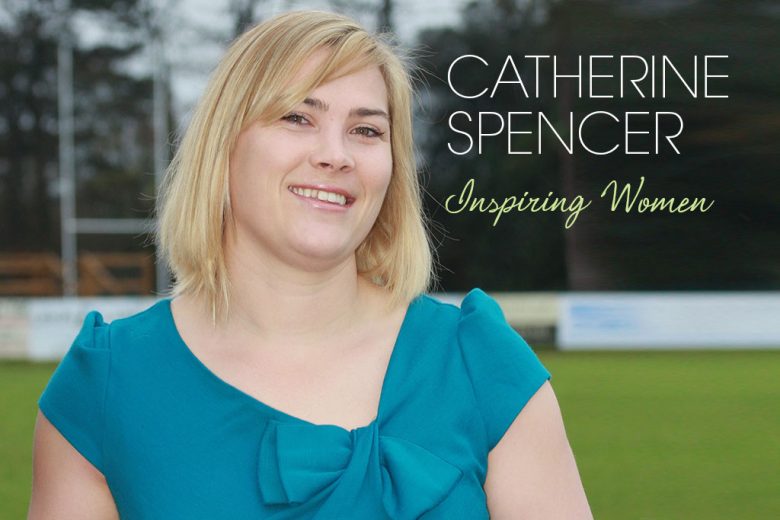 Catherine Spencer is a former International England Women’s Rugby Captain and founder of Inspiring Women, which specialises in female motivational speakers, mentors and coaches. She tells us why she swapped the rugby field for business.

What was your background before starting Inspiring Women?

I have a sporting background, specifically Women’s Rugby. I started playing alongside my twin brother at my local club in Folkestone, Kent, aged nine.

Sixteen years on, I won my first cap for England and seven years later, in 2011, I retired from international sport – having won 63 caps for England, played in two World Cup finals, won six Six Nations titles and captained my country for over three years.

How did you make the transition from rugby to motivational speaking?

When I started playing for England I found it hard to understand that I had value as a female athlete and that people did want to hear me. Plus, to me, my life as an international athlete seemed normal and to think of it in any other way at the time would have been overwhelming. So to talk about it publicly did not seem like the right thing to do.

When I became England captain in 2007 I was required to do a lot more work with the media, in front of cameras and on the radio, but also in front of live audiences. I found that it was something I really enjoyed and according to the feedback, I was good at it too.

When I retired, it then became easier to look back on my rugby career and talk about it, and to understand the opportunities that were out there to share my story. Male rugby players were regularly standing on a stage and delivering their talks, so why couldn’t I?

Why did you decide to start your own speakers business?

Over the years I have come across so many inspiring stories from fellow athletes from a range of different sporting backgrounds. At the time there did not seem to be enough platforms to share these stories, so that was and still is my main motivation.

The profile of women’s sport is starting to improve but I still think that there is the need to push this. I also think that females sometimes need more encouragement to stand up and share their stories, so that is also a huge motivator for running my own speaker business.

How do you choose your speakers?

I’ve spent over two years building my speaker list and as time has gone on I have come to understand what messages are relevant to different audiences. To start with I was approaching women I knew or who I had heard talk.

The first speaker I signed up was Bonita Norris, who was the youngest female to reach the top of Everest. I heard her speak at a Youth Sport Trust conference that I was mentoring at and she certainly inspired me.

As Inspiring Women has become more established and well-known, I now have women approaching me and asking to join my books. I am quite fussy though! Inspiring Women offers high quality speakers with valuable messages to share that have been gained through incredible experiences.

Are your speakers aimed at just women?

No, not at all. When I started Inspiring Women I was adamant that our speakers should deliver to mixed audiences, just as male speakers do. Just because they are female does not mean that they should be limited to speaking only to female audiences. Having said that, we have provided speakers for girls schools and women-only business events and that’s fine!

Do you think that women bring a unique perspective to business?

Perhaps not unique but certainly a hugely valuable perspective. I think that mixed gender teams are the most effective in business; business customers are generally both male and female, so it is important to recognise this within business to enable customer needs to be understood.

There has also been research carried out recently that shows that businesses are more profitable with mixed gender leadership teams.

What’s been the biggest challenge you’ve faced in your life?

I think that probably my biggest challenge is ongoing. I have found the retirement process extremely hard. My dream when I was playing for England was to win a World Cup and although my teammates and I came close in 2006, and very close in 2010, I never achieved that. After I retired, the team won in 2014 and it was hard for me individually to watch that.

How has your life changed since swapping rugby for business?

I haven’t completely swapped it – I am still coaching and playing a bit and will always be involved in rugby to some degree, whether I am on the pitch or supporting or volunteering in the game.

But now that my main focus has transitioned to business, my daily life has changed significantly. For a start I am not having to get up at 6am every morning to get in the gym! I still enjoy pushing myself physically and I look for challenges, but I am slightly more relaxed about my training now.

It’s now normal for me to head into London to attend business networking events and to have meetings with large organisations in the city. Just three or four years ago, I would not have recognised myself if I d been given a snapshot of my future, but I’m certainly enjoying it!

What’s the greatest life lesson you learned through sport?

It’s so hard to answer questions like this, but I guess one thing would be to make sure that you remember to celebrate your successes, as well as focus on the things that you need to work on. It is okay to be strong and it is okay to be successful!

You can find out more about Inspiring Women on their website.