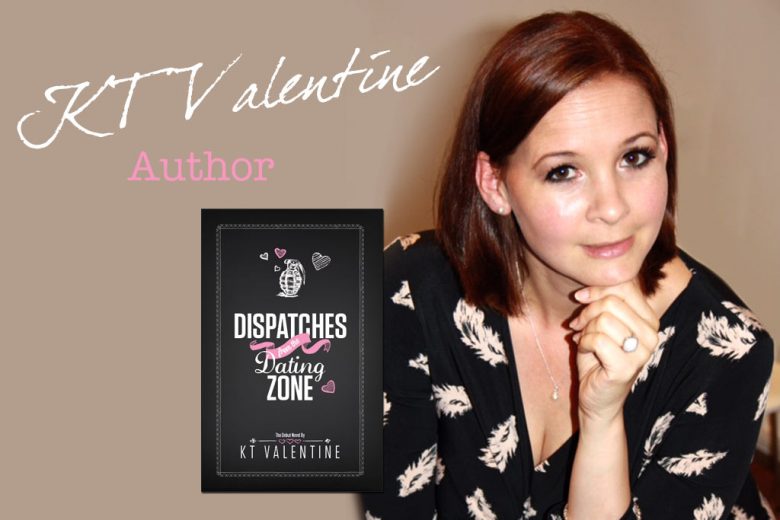 Always fancied yourself as a writer? Single mum KT Valentine was inspired to finally write the novel she always knew was in her after her disastrous experiences on the dating scene.

Where do I begin? You know that saying ‘Jack of all trades, master of none’….I started out in the Royal Air Force, spent time as an air hostess, moved into recruitment, then banking, before finally settling in PA work about five years ago.

I really enjoy being a PA and think that as a ‘real job’ it’s the job for me, but my dream job has always been to write.

How long have you wanted to be a writer?

Just like most writers, writing has been my passion for as long as I can remember. From short stories as a child to songs performed in school plays. One way or another I’ve always written.

When did you first start writing, and why did you stop?

I was 25 years old and in the very early stages of pregnancy when I finally decided to work on my first novel.  However, a third of the way through writing it my life took an unexpected turn.

Very much out of the blue and barely a few weeks after giving birth, I found myself facing the road ahead as a single mum and in the process of getting divorced. Needless to say, I didn’t write again for years.

What inspired you to finally write Dispatches from the Dating Zone?

Along time ago someone told me that some of the best writers are the ones that write about what they know. Whether that was the case or not, it got me thinking about everything I’d been through over the years and how I could draw on it for inspiration.

After turning my life around and spurred on by my family and young son, I finally put pen to paper again and Dispatches from the Dating Zone was born.

What’s the book about?

Having exhausted all the conventional ways to meet her ‘Mr Right’ (and because now she really is a little bit desperate), single mum Fleur Summers turns to her well-meaning, but eccentric friends and family for help.

From ‘Man Mountain’, an engineer who eats everything in sight and tall dark handsome Tom with big hands but no idea how to use them, to the mysterious and brooding Henry Austin, Dispatches from the Dating Zone follows the trials and tribulations of Fleur’s journey as she works her way through a number of eventful blind dates, all in the name of finding true love.

The story focuses on love, friendship, parenthood and dating and is primarily a romantic comedy with a side order of raunchiness thrown in for good measure.

How did you find finally writing your first novel? Was it easier or harder than you expected?

As a single mum, working full time and raising my 12-year old (who’s going through a phase of thinking he’s 16) while trying to write a full length novel took every ounce of self motivation and energy I had.

It also involved countless late nights and zero social life for the majority of the time it took to complete.

How long did it take you to write?

The actual writing of the book was relatively short – around four to five months – but when you factor in the re-writes, editing, putting the book away for a month and going through it all again, before I knew it a year had passed.

Add onto that the search for a literary agent… Writing a book definitely isn’t for the impatient or fainthearted.

How did you juggle being a mum around writing it?

My current occupation as a PA basically means I’m super organised. Given my home life, this definitely came in handy. I’m not going to lie though – at times it was hard going.

While I was writing Dispatches from the Dating Zone it was like I was living with my characters. Sometimes, I found it hard to switch off. I might be doing the washing up or cooking tea and suddenly a scene or conversation might pop into my head. Carrying a notepad and pen or using the notes pages on my phone came in very handy.

How does it feel to finally have your own book?

If someone had told me this time last year that my debut novel Dispatches from the Dating Zone would actually be published I’d have thought the joke was on me.

After all, I’m an average 36 year old single mum with too many wobbly bits, an out of control addiction to chocolate, who has recently recovered from spinal surgery! I never thought something like this would happen to someone like me. The fact that it has is amazing.

Who are your favourite writers?

Without doubt the following writers have, over the years, inspired me: Lisa Jewel, Jane Green and Sophie Kinsella. Reading their books in the early days got me through some very difficult and lonely times.

The author who made the longest and lasting impression on me though has to be Jackie Collins. I can remember being a 17 year old teenager reading one of her books and thinking it was the best thing since sliced bread. Jackie’s books were daring and raunchy, long before 50 Shades of Grey came along, and I found that empowering.

Are you planning another book yet?

Yes I am about to start work on the follow up book to Dispatches from the Dating Zone. Watch this space!

What advice do you have for other aspiring writers?

Just go for it. Self confidence isn’t one of my strong points and putting my writing out there for people to read and ultimately judge was scary, but the thought of looking back on my life as an old woman wondering ‘what if?’ was the motivation I needed to get myself into gear.

At the end of the day, if you have a passion for writing and work hard at it, anything is possible. Just look at me!

Dispatches from the Dating Zone is a racy romantic comedy debut novel from KT Valentine and is available from Amazon. You can read the first three chapter’s on KT Valentine’s website.

Last updated on Nov 23rd, 2022 by Hannah Martin
We use cookies on our website to give you the most relevant experience by remembering your preferences and repeat visits. By clicking “Accept”, you consent to the use of ALL the cookies. However you may visit Cookie Settings to provide a controlled consent.
Cookie settingsACCEPT
Manage consent