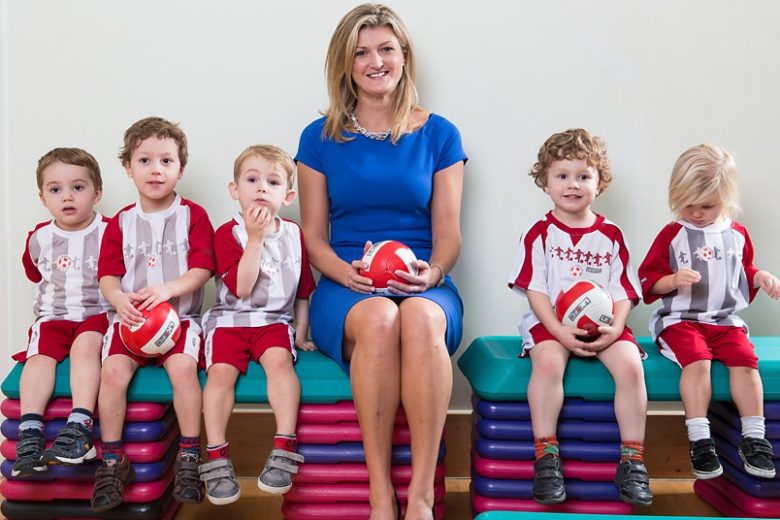 From an initial investment of £300 back in 2002, Christine Kelly has launched, evolved and shaped Little Kickers into one of the UK’s leading franchise operations.

Today it’s a football-themed offer for pre-school children that in 2019 operates across 34 countries (330 franchises) with some 65,000+ children attending classes each and every week.

Little Kickers is a franchising pioneer, the first company in the UK to operate educational football programmes for pre-school children via a far-reaching network of franchisees, and we are now the largest global operator in this space, having established the business in 34 countries.

Here’s the story of how Christine launched and grew the business.

Where did the idea for Little Kickers come from?

Back in 2002, as a young mum and high-flying risk manager, I found myself increasingly frustrated by the depressing dearth of activity orientated initiatives for inquisitive pre-school children.

The burning idea was never to establish some sort elitist football scouting network for pre-schoolers, but instead focus my energies on establishing a fun-based club #morethanjustfootball, footy-themed movement that provided every child with a positive first exposure to sport.

Little Kickers resonates with health-conscious parents who personally subscribe to active, out and about healthier living regimes and who want the same buzzy, ‘fun-centric’ activities for their children.

The latest research consistently suggests that children who embrace a ‘sport is fun’ outlook through personal experience are much more likely to stay with sport as they get older.

Little Kickers was undeniably ahead of its time championing improved kids’ health long before unnerving phrases like ‘obesity epidemic’ ‘poor diet’ and ‘infant lethargy and inertia’ started clogging up the airwaves.

In essence Little Kickers is an energetic and interactive children’s club, (loosely based around football) which encourages children and children with parents to have fun through sport-based activities, a happy, laugh out loud, interactive environment where inquisitive children thrive, building confidence, self-esteem and an enchanting sense of belonging that fast tracks their personal development.

What was your Eureka moment?

Back in 2002 when my pilot class in Clapham was oversubscribed by 400%!

That’s not to say there weren’t challenges from the very outset because there certainly were. I discovered ‘early doors’ that parents weren’t very happy to sign up to football classes run by someone called “Christine”.  Amazingly the tide quickly turned when I tweaked the literature and support posters to say Chris.

There were more teething problems down the line when I discovered how hard it was to recruit great coaches, because at the time Little Kickers was taking shape no-one really had experience of coaching football to pre-schoolers.

And yet fifteen years down the line it’s the innovative thinking of progressive coaches that sets Little Kickers apart from the crowd. One of the regular criticisms levelled at franchises is that they are overtly rigid, bureaucratic and by-the-book, straight jacketing creative thinking, innovation and entrepreneurship.

Little Kickers refuses to be tarred by phrases like narrow-minded and blinkered. We believe that one of our core differentiators, and one of the factors that has had the most positive influence on the growth of our business, is our collaborative relationship with our franchisees.

We recognise that they are working on the coal face of our business every day – interacting with customers (adults and kids), coaches, advertisers and suppliers and that they have high levels of exposure to emerging market trends and the competitive landscape in their local areas.

We are lucky in that Little Kickers attracts people from a wide variety of professional backgrounds, so we have a large pool of varied experience to draw from and many unique and creative perspectives.

So many ideas for new initiatives we have implemented within the business over the years have come from our franchisees (classes for older and younger age groups, birthday parties, English Language Programme etc) and we recognise that maintaining a positive relationship which is conducive to collaboration, is critical to the success of the business.

I was recently voted one of the 10 most powerful women in UK franchising, demonstrating that Little Kickers is playing a pivotal role in refreshing and energizing positive attitudes to franchising.

It’s interesting when you spread overseas to see the different benefits and barriers to succeeding overseas.  In India we have a thriving business on account of a growing obesity epidemic and the worrying lack of physical activity in school, which is interesting when you realise that it stems from parents placing a greater onus on academic prowess than health and fitness.

In countries like Mexico and Spain the inclusion of an English Language Programme (learning as they play is a massive draw – edutainment), whilst in Germany the parents’ growing appreciation of ‘entrepreneurism’ and an insistence on better health and fitness for their kids are key drivers behind our success.

For all the smears constantly thrown at football (greed, elitism….) at a grassroots level there’s no doubt that footy has the potential to build bridges and hope!

What have been your proudest moments?

I have a few and the good news is that they’re recent ones. Our recent annual conference at Old Trafford where we had our biggest ever turnout and where so many tales of success were shared.

Another is being awarded an honorary Doctor of Business Administration by old university (Aston) for my contribution to ‘entrepreneurship.’

Giving back to my university with the President of the British Franchise Association to agree a shared initiative to investigate franchising course content for their undergraduate and MBA programmes – I even donated a franchise to the university which will pay for two placement students to secure invaluable experience in the job with any additional profits being ploughed back into funding scholarships for the university.

What’s your top piece of advice for aspiring entrepreneurs?

Find something you do really well and stick at it and become the absolute expert in that field – we dabbled with rugby, dance….. but soon realised that footy was our specialist subject.

If there was one thing you could change, what would it be?

Both at home and abroad it’s frustrating how many parents don’t believe football is right for their girls. Thankfully with the resurgence of women’s football as a global spectator sport things are changing for the better (20% of our attendees are girls) but it’s still a constant frustration to me as I was brought up to believe that being female isn’t a barrier to anything!

You can find out more about Little Kickers on their website.