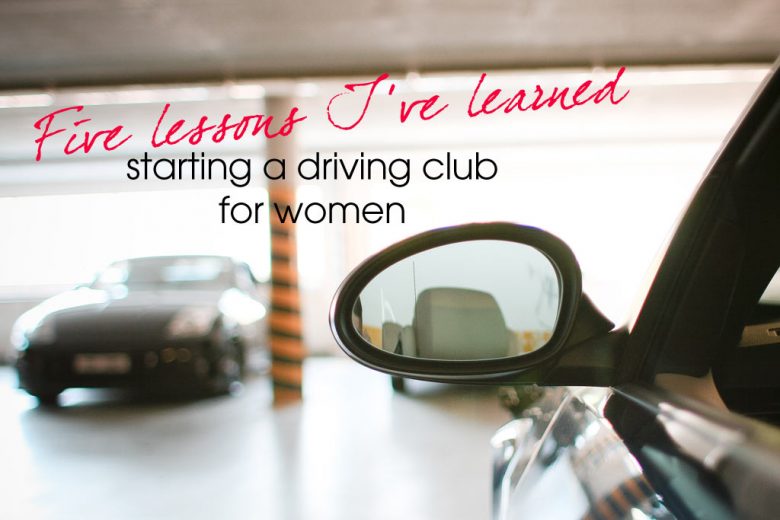 However much you plan and research before starting a business, you can never anticipate or prepare for everything. At some point, you just need to launch the business and learn as you go.

10 years ago, Steph Savill ambitiously started the UK’s first driving club aimed solely at women – the FOXY Lady Drivers Club. Since its launch, the club has grown from strength to strength, and today offers a range of helpful and cost-saving benefits to its female members.

But, like many entrepreneurs, along the way Steph has had to learn many business lessons. Now she shares five of them with us.

I had no idea what I was letting myself in for

I’ve always been a workaholic with opinions. And while some of these opinions undoubtedly helped me up the career ladder in my early days, they finally cooked my corporate goose when, armed with a new MBA, I decided I wanted to do things differently and my employer didn’t agree.

At the time I had a cunning business plan in mind and wanted the time and space to see if it might take off. I had no idea what I was letting myself in for.

That was 10 years ago, and my idea was to form a motoring club for women with a range of female friendly, time saving and value for money support services. To this day I find it hard to believe that UK garages that service and repair our cars don’t have to be licensed and that mechanics who fix our brakes don’t have to be qualified or keep up to date with the latest car technology.

Of course there are many well intentioned self-regulating industry schemes, but they do nothing to out the dodgy and unscrupulous mechanics and used car salesmen that seem to carry on regardless. My aim was for the FOXY Lady Drivers Club to help women avoid the cowboys and find ethical, female-friendly businesses to help them.


Over the past 10 years, I have learned many valuable lessons starting and running my business. Here are five of them.

1) Too many female drivers rely on their partners

Too many women rely on their male partners to maintain their car, take it to the garage and go with them when they want to buy a new car. And while this works all the time their partner is around, what happens if they split up, or if for some reason their partner isn’t around to help them?

I want to empower more women so they know what to expect, what to do with their car, what not to put up with from garages, and when to go elsewhere – that’s why I started the FOXY Lady Drivers Club.

Since starting FOXY, much to my surprise, I’ve become a garage expert in terms of know how, know who and know what to do when things go wrong – and I am passionate about sharing this knowledge with other women. I’m not sure anyone else shares my passion for full blown regulation in this area but that’s what I’d really like to see!

2) A memorable business name can get you in trouble!

When I started the FOXY Lady Drivers Club I was determined not to have a bland ‘Car Club For Women’ title, and spent days agonising over the right name.

In the end I followed my husband’s suggestion “You need an adjective to liven this sort of thing up – something like foxy perhaps?” And that was how FOXY Lady Drivers Club got its name back in 2004.

There were some downsides though. In those days there were no clever SEO techniques to stop online searchers for FOXY Lady ending up in unsavoury ‘dark’ areas of the internet! (I always wondered how Richard Branson would have fared with Virgin if he’d started out at the same time as us.) It wasn’t fun.

Another reaction was one you could see in most male eyes – those who heard the name and instantly dreamed of scantily clad women (and were then disappointed to see me instead…). But this name gave me the feisty image I needed to position FOXY as a female brand meaning shrewd and discerning. I’ve yet to meet a female that isn’t both of these, or a man that doesn’t remember us – even if he gets the wrong idea about our intentions to begin with!

3) Gender-specific businesses can offend both sexes

Doing anything that seems to favour a gender can be tricky and it sometimes seems to upset both men and women in equal measure.

Women who know more about cars than most men, or those who don’t realise the risks they run of being overcharged or patronised, can take offence at the idea of a woman-only driving club. As can men who have had enough of women’s perceived ‘feminism.’

I’m proud to be a feminist but my definition of the F word is my own – equality for all in terms of education, pay, jobs, parenting and opportunities. Sadly too few employers and businesses seem to appreciate that men and women are equal but often very different; we each deserve and expect different treatment at different stages of our lives to become loyal employees and customers.

4) I was too late to influence the EU Gender Directive

Sadly I was too late to see the EU Gender Directive coming – this prevented UK insurers from rating car insurance premiums by gender risk in December 2012.

From what I can determine this was all sewn up some ten years or more beforehand, which might explain why nobody stuck up for women’s rights then. FOXY was too late to the party to be taken seriously.

Only yesterday I wrote a blog about the fact that 85% of all motorists banned from driving last year were male, so the risk remains as gender-skewed as ever, but now women are paying towards the costs of sorting this all out. And motor insurers returned to profitability in 2013 after many loss making years. I suspect, but can’t be certain, that these events may be related!

5) We’re still a way off equality

Motoring services aren’t good enough for women but they can be better. Some garages and dealers are much more female-friendly than others and we all need to be able to cherry pick the best ones locally and share the latest feedback about them.

Undoubtedly the motor industry needs more women working in it, from the boardroom to the car showroom and garage workshop floors, otherwise how can our best interests be fairly represented in these areas in future?

The motor industry is said to be the UK’s last male bastion but it can’t survive as such for much longer. The tipping point is nearly here – the number of women registered as vehicle owners has risen by 72% since 1994 and within the next few years there’ll be more women drivers than men on our roads.

Then maybe we’ll finally start to see the competitive time-saving, value for money and stress-busting services that busy women drivers need, delivered by genuinely female friendly businesses that appreciate and respect our family needs and custom.

And those complacent garages and showrooms that brag about ‘treating all our customers the same’ will start to notice their female customers drifting towards competitors who are clearly going that extra mile for us in terms of their quality, value, cleanliness and all round female friendly services. Roll on the female revolution in the UK motor industry…

Steph Savill is the founder of the FOXY Lady Drivers Club. You can find out more about the club and the benefits of joining on their website.