Can working mums really have it all? 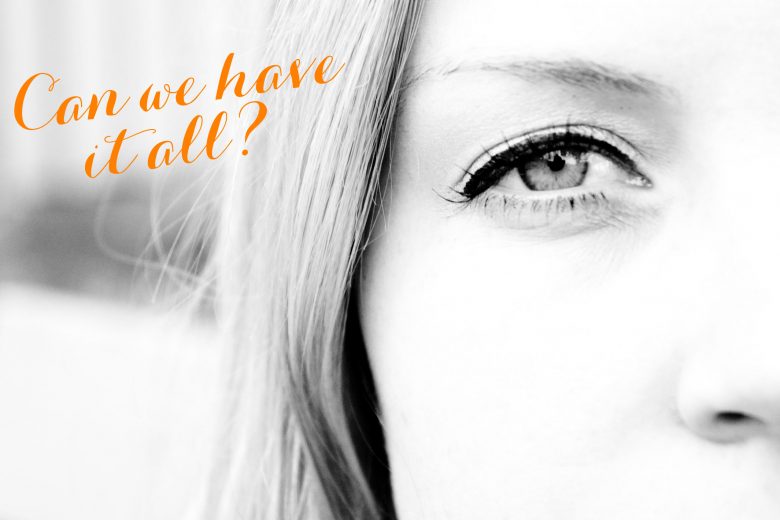 Can working mums really have it all? Nearly two years ago, Nicola Davies assumed not and gave up her secure career to go freelance. And then she read Sheryl Sandberg’s book Lean In, and regretted not being stronger. She’s kindly shared her blog with us.

“I have never met a woman, or man, who stated emphatically, “Yes, I have it all.'” Because no matter what any of us has – and how grateful we are for what we have – no one has it all.” Sheryl Sandberg, Facebook CEO

If Sheryl Sandberg’s book had come out two years ago I might be in a different place by now. It’s the story I’ve been searching for since I had my first child. It doesn’t have the answers but it reassures me that other people are asking the same questions.

A year ago today I left my middle-management, nicely pensioned, bloody hard work but very inspiring local government job. I’d worked for someone else since I graduated at 21 and I was giving it all up to go it alone.

When I handed in my notice three months and one week earlier, everyone had seen the signs and guessed it was coming. They knew I was struggling to juggle work, two young children and a husband whose own career was taking off. The tears gave me away.

We’d had a tough few months with two small children timing their chicken pox and childhood bugs perfectly with our peaks in workload. So after pulling too many all-nighters working (and even more all-nighters awake with a young child), I knew that something had to give.

He’d support whatever decision I made (for me or him), but knew I could be the only one to make it.

For the first time in my life I decided my career would take a back seat, I had to focus on family. It’s the hardest decision I’ve ever made. I’m lucky to have had a choice, even if it wasn’t the choice I wanted to make.

When I resigned I got lots of “I hear you’re leaving to spend more time with your children, oh that’s lovely.” No! That’s not why I left. This is why:

I would rather stop doing the job, than just do it to a satisfactory level. I no longer had the energy to be the person I wanted to be. Because you can’t have it all.

So I resigned from my proper job and went freelance. I spent the first three months with a huge hole in my heart (that’s no exaggeration). Missing my colleagues, the work, even missing the commute – that valuable two hours a day alone with just a radio or book for company.

But as the work picked up I started opening my eyes and living again. One year on I’m back to working almost the same hours I did before – but now I can bill for it! If I want a day off, I take it and more often than not I’m doing the school run.

It isn’t perfect. I’m suited to working in big teams, in big organisations and I miss my team, local government and all the challenges it brings. But I’ve stopped trying to have it all and I’m happier for it. I can’t have the career I want and be a mother at the same time.

But I do have one regret. That I wasn’t strong enough to believe that I could continue in my job and be a mother at the same time. That I didn’t have the confidence to say “right, off on the school run” with all the attitude and self-assurance of a man in my position.

I still wonder why it’s so hard for many people to understand that women can love their jobs as much as they love their children. Working makes me happy and being happy makes me a better mother. I shouldn’t be afraid to say that. But this is still a tough blog post to write.

And that’s where women like Sheryl Sandberg come in.

“Our culture needs to find a robust image of female success that is first, not male, and second, not a white woman on the phone, holding a crying baby,”

You can read more of Nicola’s writing on her blog.