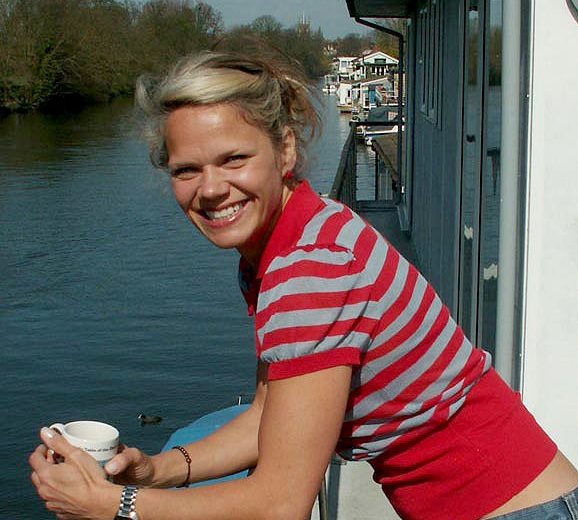 Suzanne Cave is an actress, voiceover artist and role play facilitator. She lives on a houseboat on the River Thames near Hampton Court with her partner David O’Brien, and two children aged seven and four. Lucy Mason spent an afternoon with Suzanne finding out how she manages to juggle a career with her responsibilities as a mum.

I trained as an actress after finishing my degree in psychology and anthropology. From my mid-20s to 30s I was doing a lot of touring theatre, various TV and radio, and appeared in the West End production of ‘An Inspector Calls’. I love working in physical theatre which combines movement and dance with theatre. Through this, I got a part in the BBC documentary ‘Walking with Cavemen’ and glamorously appeared in full face prosthetics and fake body hair on the front cover of the ‘Radio Times’ magazine.

I worked really hard at building my career, doing lots of theatre workshops and trying to make good contacts with casting agents and other actors. As an actor you have your sights on ‘it’ happening which I suppose means getting recognition for your work, increasing your opportunities – the Big Break. But conventional paid acting work can be very infrequent, so I had to find a way of supporting what I did. I wrote to agencies that hire actors for role play at corporate training workshops, and slowly this type of work started to trickle in. It wasn’t the direction I originally wanted to go in, but along with occasional voiceover work, it gave me the financial support that meant I could go after the more creative but less frequent acting jobs.

My first experience as a working mum

When my partner and I talked about having children, I was slightly blind in that I thought that, with acting being flexible, it would fit really well around having kids. I knew it would be difficult to do theatre touring, but thought my partner and I could work childcare out between us. Dave is a professional musician and his career wasn’t as established as it is now, so in theory his time was more flexible. The reality was very different. If I remember rightly I first took a day’s work when my daughter was five weeks old, leaving her with Dave. It was a corporate role playing job and I was in a meeting with colleagues when he called to say “I don’t think I can do this whole dad thing”. He thought it was the end of his life that day! Although it became apparent early on that Dave wasn’t going to be able to take the kids for a couple of days every week while I worked, things did get easier. My mum helps out too, and because my work is infrequent, it is doable – the kids get to spend time with other family members and I get to be an adult for a while.

When it comes to work, I have three rules that I try to stick to. The work has to pay well, it has to be interesting ‘growth’ work where I’m learning something, or it has to be a great location. My philosophy is that it has to benefit the family: if I’m earning a lot it goes into the family pot; if it’s ‘growth’ work then it’s expanding my mind so I can be a good example to my kids, and the great location, well that one’s for me! I might go to Amsterdam or Berlin for a few days’ voiceover or role play work, but these opportunities don’t come up very often.

My next big challenge

The next big challenge for me will be next year when both kids are at full-time school. I’ll have free time until the afternoon pick up, which is sad and happy. I don’t have any desire to see my kids less, but if they both enjoy school and they’re happy then I will have less guilt about asking for childcare favours. I’ll have time that I can devote to work and give them full attention at home. I’d love to go for more theatre acting and voiceover work, and be less reliant on corporate stuff, but it’s been a while since I’ve done much theatre work so I know this will be a challenge.

I’d like to develop my career but I’m not sure what direction yet to go in. I’m working on a couple of embryonic projects, including helping design and deliver a workshop about building and developing characters for children’s authors, using acting techniques. I’m also part of a storytelling company called ‘Narativ’ that works with individuals and organisations to find their personal story and discover their role in business and life. We’ve worked with prostitutes, artists and bankers to find their stories for many different reasons. For sex industry workers, for example, it’s about validating their life; a lot of people don’t feel heard. Excavating and structuring a story uses technical skills which draw on my acting experience and interests in anthropology and psychology. It’s all about bringing together the personal and business worlds, which seems very relevant to me right now.

If you want to get in touch with Suzanne about any upcoming projects, please email her. You can also learn more about Narativ on their website.